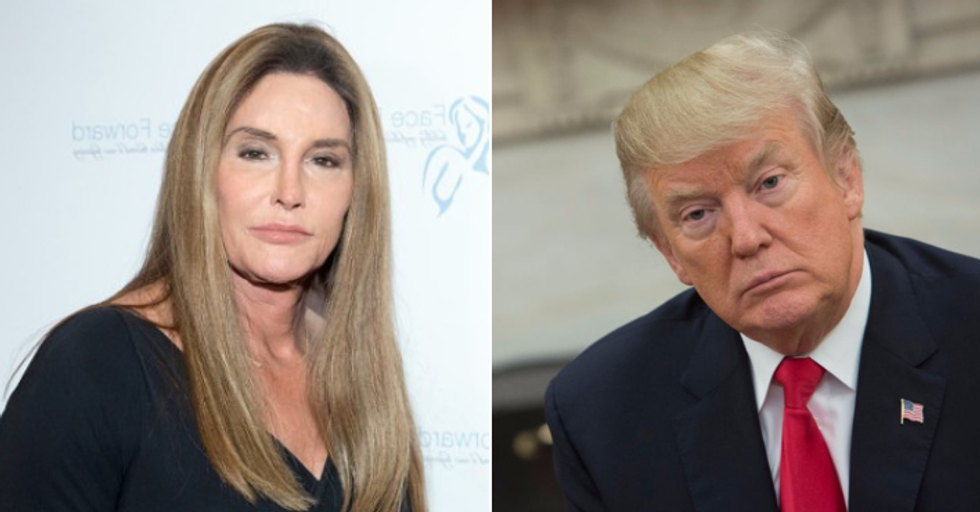 Lifelong Republican Caitlyn Jenner spoke out against President Donald Trump publicly and clearly for one of the first times since he took office in January 2017.

In an interview with People magazine, Jenner addressed the President directly in response to his administration's plans to establish gender as binary and determined at birth.

"The Trump administration has ferociously attacked my community again. Just as an FYI Mr. President—the military is the single largest employer of trans people in the world."

"This leaked memo is an unacceptable attack on my community. We will not be erased!"

The memo referenced came from the Department of Health and Human Services, under Trump's appointee Alex Azar. The Trump administration, through DHHS and Azar, hopes to define gender as a biological, binary, immutable condition determined by genitalia at birth.

In addition to erasure of the transgender community and ignorance of science and the multiple factors that biologically determine gender beyond genitalia, it also ignores the traditional cultures of the United States.

Many tribal cultures indigenous to the United States recognized more than a binary gender construct. They recognized from three to seven genders.

To mandate all people in the United States must recognize only two genders is also an erasure of Native American heritage and traditional culture.

DHHS and the Trump administration seek to attach their narrow gender definition under Title IX. Title IX banned discrimination based on a person’s sex in federally funded education programs.

But since taking office, the Trump administration have attempted to use the law to limit the rights of sexual assault victims on college campuses and strip the LGBT community of their basic human rights with attachments made by memo through Betsy DeVos at the Department of Education, DHHS and Ben Carson at Housing and Urban Development.

"Sex means a person’s status as male or female based on immutable biological traits identifiable by or before birth. The sex listed on a person’s birth certificate, as originally issued, shall constitute definitive proof of a person’s sex unless rebutted by reliable genetic evidence."

Their definition shows a distinct lack of scientific knowledge or understanding of the multiple factors that contribute to human gender beyond physical appearance of genitalia on a newborn. But ignorance of science is a frequent criticism of the Trump administration and the Republican Party.

Jenner herself proved reluctant to criticize her own political party after she came out which led to considerable backlash toward Jenner from the transgender community and their allies.

But Caitlyn Jenner was born in 1949 in a traditionally conservative family in upstate New York. Her coming out as transgender in April 2015 and transitioning negates none of that lifetime of conservative views.

She also lived in California for decades, after winning the Olympic gold in the decathlon in 1976. Jenner is used to the Ronald Reagan and Arnold Schwarzenegger breed of Republican, not the Tea Party Republicans and those entrenched in the religious right of Evangelical Christianity.

Jenner originally supported Trump, angering many in the LGBTQ community and their allies. But she changed her mind after Trump attempted to eliminate transgender people in the military.

In August, she stated:

"I honestly don’t know what happened when he got in there. It was extraordinarily disappointing."

But people disagree with Jenner's assessment of a Trump change.

They point to Trump's Evangelical Christian running mate and Vice President Mike Pence's history of attacks on the LGBTQ community while Governor of Indiana. They state Trump always indicated he planned to attack the basic human rights of multiple groups within the United States.

Despite the GOP backing Trump's attempts to mandate discrimination against the LGBTQ community, Jenner intends to remain in the Republican Party. She stated:

"I think it’s a good thing that I’m on the Republican side because I’ve got an in. Has this administration set us backwards? Absolutely."

"And every time they’ve done it, I’ve fought it... I fight those types of wars. I fight the equality wars. I do it all very quietly. We’re going to be okay in the end."

Jenner said she makes frequent trips to Washington DC and spoke to over 50 members of Congress during those trips. She added:

"What’s going on in Washington D.C. is just disgraceful. The hate, the media, all the things that are going on there... [Trump’s] not been doing a very good job, but it’s not over yet."

Whether this means Jenner hopes Trump changes or something else is unclear. A frequent criticism of Jenner is her life of relative privilege makes her out of touch with the lives of most of the members of the transgender and LGBTQ community. Others call her naive.

Anyone else remember when Trump supporters during the election said Trump would be a pro-LGBT president because he… https://t.co/0xQooOqmUZ
— Sally Kohn (@Sally Kohn) 1540139995.0

Whether the Trump administration pushes forward with their proposed narrow definition of gender may largely depend on the results of the 2018 midterm elections. If the GOP retains control of Congress, it will likely proceed.