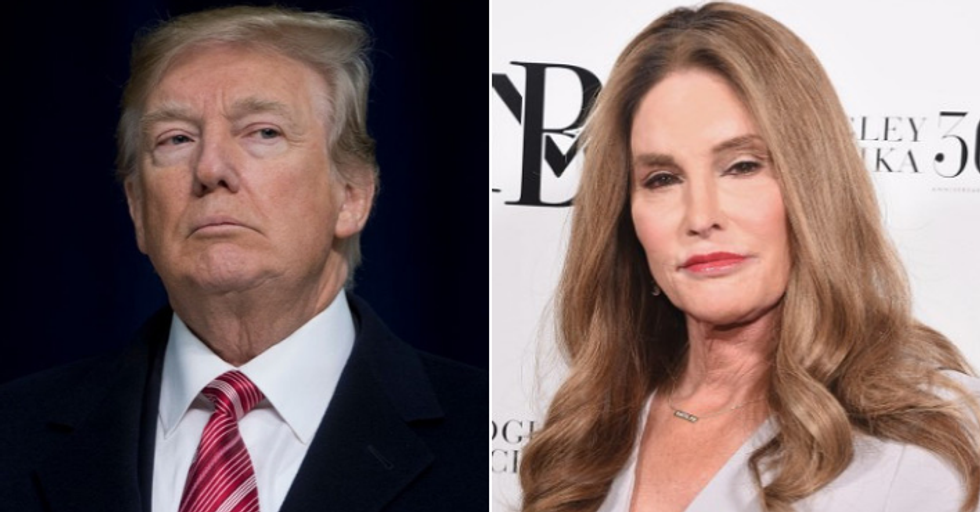 Caitlyn Jenner—who famously came out as a transgender woman in 2015 and shared news of her transition with the public—penned an OpEd for The Washington Post published Thursday afternoon. A lifelong Republican from a conservative background, Jenner supported President Donald Trump during the 2016 election and after.

"I thought Trump would help trans people. I was wrong."

After a memo from the Trump administration's Department of Health and Human Services leaked, the public learned they intended to define gender as binary and determined by genitalia at birth. While the move ignores science and the complex nature of human gender, it surprised few people familiar with the close ties between the Trump White House and the religious right.

Evangelical Christians—like Vice President Mike Pence—embrace any rollback of the rights of LGBTQ citizens. However not all Republicans are on board for a government ruled by the Evangelical interpretation of the Bible over the United States Constitution.

Jenner, a once vocal advocate for Trump, now admits she made a mistake. She wrote:

"These past two years under President Trump have given me the opportunity to reflect on a lot of topics that have come up in the LGBTQ community and in our nation. Some of these are thorny issues still worth discussing; many should have been settled long ago."

"As I’ve watched and pondered, my outlook has changed significantly from what it was during my highly publicized and glamorized early Caitlyn days, when my life as an out trans woman was just beginning."

In her OpEd, she also acknowledges her privilege. She stated:

"Since then, I have learned and continue to learn about the obstacles our community faces, the politics that surround us and the places my voice can help. I have reflected on what my unique position of privilege means and how I can best use it to make a positive difference."

Jenner then reflected on Trump's promises during the Republican Convention and his vow to support and defend the LGBTQ community. She recounted her hope for a change in the GOP and her plan to affect change from within.

"I made many trips to Washington to lobby and educate members of Congress, other Washington policymakers and powerful influencers. These meetings were generally positive and almost always led to encouraging conversations. Despite the criticism I received from segments of the LGBTQ community for engaging with this administration, I remained hopeful for positive change."

"Sadly, I was wrong. The reality is that the trans community is being relentlessly attacked by this president. The leader of our nation has shown no regard for an already marginalized and struggling community. He has ignored our humanity. He has insulted our dignity."

"He has made trans people into political pawns as he whips up animus against us in an attempt to energize the most right-wing segment of his party, claiming his anti-transgender policies are meant to “protect the country.” This is politics at its worst. It is unacceptable, it is upsetting, and it has deeply, personally hurt me."

Jenner then admits she made a mistake.

"Believing that I could work with Trump and his administration to support our community was a mistake. The recently leaked Department of Health and Human Services memo that suggests—preposterously and unscientifically—that the government ought to link gender to one’s genitalia at birth is just one more example in a pattern of political attacks. One doesn’t need to look back far to witness the president assault our nation’s guardians with a ban on trans people serving in the military or assail our nation’s future with a rollback of Obama-era protections for trans schoolchildren."

And she points the blame squarely on Trump. She wrote:

"It’s clear these policies have come directly from Trump, and they have been sanctioned, passively or actively, by the Republicans by whose continued support he governs. My hope in him—in them—was misplaced, and I cannot support anyone who is working against our community. I do not support Trump. I must learn from my mistakes and move forward."

The former Olympian then reaffirms her commitment to the LGBTQ community, but vows to learn to listen better in the future. She stated:

"I need to better use my voice, my privilege and my foundation to advocate and support our community."

While Jenner adds she will still work with anyone who vows to help, she finished by stating:

Whether Jenner's change of heart will be viewed as too little, too late remains to be seen. She faces intense backlash from members of the LGBTQ community and their allies whenever she speaks.

Her mea culpa may prove a step toward healing the rift her support of the Trump administration created however.