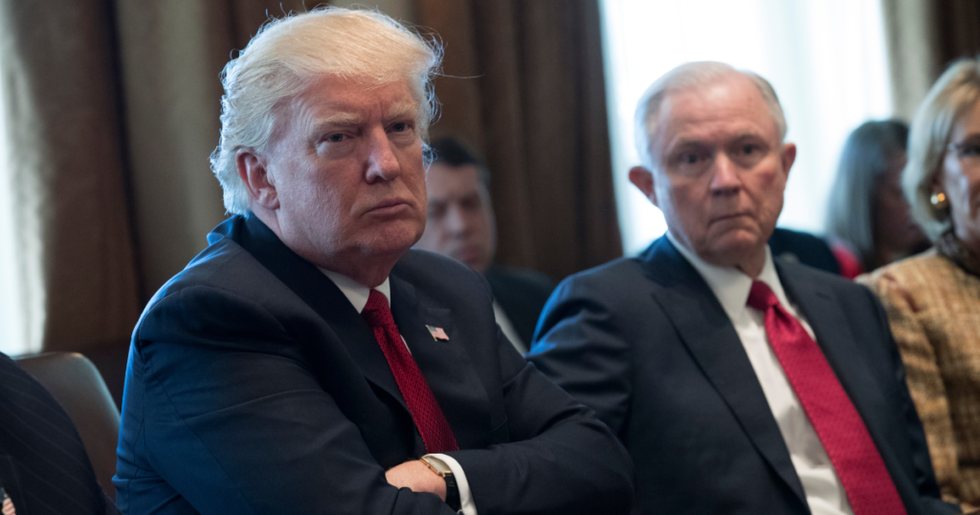 Attorney General Jeff Sessions tendered his resignation Wednesday at the request of President Donald Trump, flaming Democrats' concerns over the future of the investigation into Trump's ties to Russia.

Trump announced Sessions' departure along with his immediate replacement on Twitter Wednesday afternoon.

"We are pleased to announce that Matthew G. Whitaker," Trump wrote, "Chief of Staff to Attorney General Jeff Sessions at the Department of Justice, will become our new Acting Attorney General of the United States. He will serve our Country well."

"We thank Attorney General Jeff Sessions for his service," Trump added, "and wish him well! A permanent replacement will be nominated at a later date."

....We thank Attorney General Jeff Sessions for his service, and wish him well! A permanent replacement will be nominated at a later date.
— Donald J. Trump (@Donald J. Trump) 1541619852.0

Under the law, Whitaker can serve up to 210 days while the president finds a permanent replacement for Sessions.

Whitaker, a long-time Republican operative, is a former U.S. district attorney in Des Moines, Iowa who mounted an unsuccessful Senate bid in 2014. He joined the United States Justice Department in September 2017, serving as Sessions' chief of staff.

Whitaker's ascension to Acting Attorney General is unusual. Typically, the deputy AG steps into that role. Under normal circumstances, Sessions' successor would be his deputy, Rod Rosenstein.

As of Wednesday afternoon, Rosenstein's role overseeing Special Counsel Robert Mueller's investigation came to an abrupt end. Whitaker will be taking over.

“The Acting Attorney General is in charge of all matters under the purview of the Department of Justice,” said Justice Department spokeswoman Sarah Isgur Flores.

Like Trump, Whitaker has decried Mueller's probe as a "witch hunt" and has inherited the authority to fire Rosenstein, whom Whitaker has urged “to order Mueller to limit the scope of his investigation to the four corners of the order appointing him special counsel.”

Sessions abdicated his power to fire Rosenstein when he recused himself from the Russia investigation last year.

“If [Mueller] were to continue to investigate the financial relationships without a broadened scope in his appointment, then this would raise serious concerns that the special counsel’s investigation was a mere witch hunt,” Whitaker wrote on CNN.com last August.

Speaking to Don Lemon last summer, Whitaker predicted that Trump would "try to get Rod to maybe even cut the budget of Bob Mueller.”

“I think what ultimately the president is going to start doing is putting pressure on Rod Rosenstein, who is in charge of this investigation,” Whitaker said, “and really try to get Rod to maybe even cut the budget of Bob Mueller and do something a little more stage crafty than the blunt instrument of firing the attorney general and trying to replace him.”

Whitaker has also said, as the president has as well, that Mueller digging into Trump's finances would be “a red line” that Mueller is “dangerously close to crossing.”

“It does not take a lawyer or even a former federal prosecutor like myself to conclude that investigating Donald Trump’s finances or his family’s finances falls completely outside of the realm of his 2016 campaign,” he wrote in a CNN op-ed. “That goes beyond the scope of the appointment of the special counsel.”

Thus, Whitaker's appointment greatly imperils Mueller, and as such, the truth.

Democrats, having scored a tremendous victory winning control of the House in the midterms, are prepared to take on Trump.

House Minority Leader Nancy Pelosi (D-CA), who will likely reclaim the speakership in January, accused Trump of firing Sessions in order to meddle in the Mueller probe.

"It is impossible to read Attorney General Sessions’ firing as anything other than another blatant attempt by President Trump to undermine & end Special Counsel Mueller’s investigation."

House Minority Leader Pelosi: "It is impossible to read Attorney General Sessions’ firing as anything other than an… https://t.co/DHYZlbzFVS
— NBC News (@NBC News) 1541624975.0

California Congressman Eric Swalwell, a Democrat on the House Intelligence Committee, called upon Congress to protect Mueller, an issue which has garnered bipartisan support.

Representative Jerry Nadler (D-NY), poised to become the chair of the powerful House Judiciary Committee, demanded Trump explain why he asked Sessions to step down and that the president will be held accountable.

"Americans must have answers immediately as to the reasoning behind @realDonaldTrump removing Jeff Sessions from @TheJusticeDept, Nadler vowed. "Why is the President making this change and who has authority over Special Counsel Mueller’s investigation? We will be holding people accountable."

“Oh,” he said as he was handed a note, “protecting Mueller and his investigation is paramount."

“It would create a constitutional crisis if this were a prelude to ending or greatly limiting the Mueller investigation," Schumer added, "And I hope President Trump and those he listens to will refrain from that."

Later, Schumer responded to Trump's tweet: "Clearly, the President has something to hide."

Schumer also called on Whitaker to recuse himself from the Russia investigation because of the conflicts of interest stemming from his past remarks.

BREAKING: Chuck Schumer just called on Matthew Whitaker to recuse himself from the Russia probe. Everyone in Congre… https://t.co/SX5zsM8nYU
— Scott Dworkin (@Scott Dworkin) 1541623457.0

Reactions from the public continued on social media.

People are extremely concerned over Mueller's future, and as such, Trump's continued attempts to obstruct justice.

@JordanUhl @justinhendrix well **** looks like orchestrated obstruction of justice. pisses me off how this obscenel… https://t.co/XV8sWH0oyd
— edge case (@edge case) 1541621166.0

Democrats may have won a battle yesterday, but the war rages on.