Jeff Sessions Really Wants to Crack Down on Medical Marijuana, Even Where It's Legal. Veterans and Parents of Ill Children Are Fighting Back

Jeff Sessions wants to take away medical cannabis. Veterans and families whose children have been saved by it are fighting back. 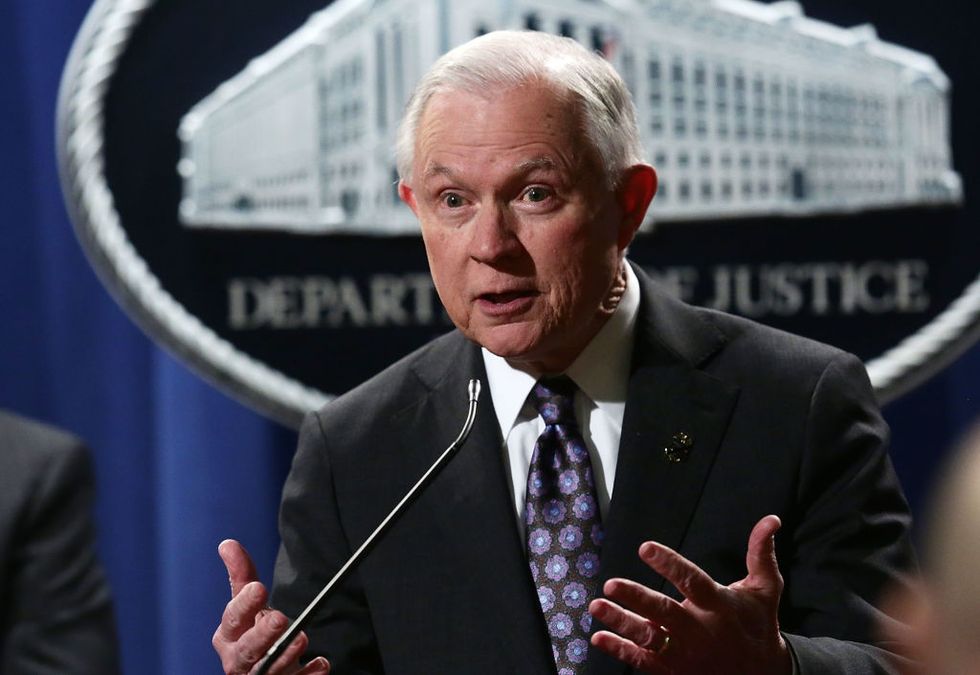 During a November 28 press conference, US Attorney General Jeff Sessions suggested that the Department of Justice is planning to crack down on recreational marijuana, even in states that have legalized it. Now proponents of medical cannabis fear that this crackdown could also extend to medical cannabis, now legal in 29 US states.

On December 8, 2017, Congressional Republicans narrowly avoided a government shutdown with a deal that would fund the government by another two weeks. That means an amendment within the bill, known as the Rohrabacher-Farr Act (also known as Rohrabacher-Blumenauer) will also be extended two weeks. That law, made up of just 85 words, blocks the Department of Justice from using any money to prosecute medical marijuana patients in states where it's legal. If the law is not upheld, patients who are currently able to access legal, cannabis-based treatments may find themselves on the wrong end of the law, or unable to access their formerly legal medicine.

The next step is for Congress to approve a full budget for 2018. Two versions have already been written and passed, one by the House and one by the Senate. The Senate version includes the language of the Rohrabacher-Farr Act, which means patients would continue to have access to medicinal cannabis in states where it is legal. The House version vehemently does not, because of another Sessions, Pete (no relation to Jeff), who chairs the House Rules Committee. Pete Sessions vehemently opposes protections for medicinal cannabis, and refused to let the amendment pass out of his committee. Now, the two versions of the budget must go through a reconciliation process in which they devise a final version. It remains to be seen whether that final version will include the language of the Rohrabacher-Farr Act, but with two Sessions against it, patients who rely on medicinal marijuana have reason to worry.

Jeff Sessions has asked Congress to oppose protections for legal marijuana and allow him to prosecute medical marijuana. “I believe it would be unwise for Congress to restrict the discretion of the Department to fund particular prosecutions, particularly in the midst of an historic drug epidemic and potentially long-term uptick in violent crime," said Sessions. The attorney general is a staunch opponent of both recreational and medical cannabis use, and has called it as “bad as heroin.”  He also once said the KKK was "OK until I found out they smoked pot."

In a letter to congressional leaders, Sessions requested an end to the medical cannabis protections. “The Department must be in a position to use all laws available to combat the transnational drug organizations and dangerous drug traffickers who threaten American lives,” he said.

Two congressmen behind the original provision for medical cannabis, Rep. Dana Rohrabacher, R-California, and Rep. Earl Blumenauer, D-Oregon, have sent a letter co-signed by 64 of their peers to House and Senate leadership, urging them to extend the provision that “has successfully protected patients, providers, and businesses against federal prosecution, so long as they act within the confines of their state’s medical marijuana laws.”

Meanwhile, medical cannabis is increasingly accepted by the American public. A Quinnipiac University poll found that 94 percent of Americans are in favor of medical marijuana if a patient’s doctor prescribes it.

Much of this favor comes from an unlikely source: mothers. Some of the most persistent voices in global efforts to legalize medicinal cannabis are the parents of children with drug-resistant forms of diseases. In particular, Dravet syndrome, a rare and deadly form of epilepsy that causes children to have chronic seizures, leading to brain damage and death, is being treated in legal states with cannabis-oil derivatives. A study published in the New England Journal of Medicine of 120 children with Dravet syndrome found that half of the patients treated with medicinal cannabis experienced a marked decrease in the number of seizures they experienced, and 5 percent of the patients in the study stopped having seizures entirely.

One of the study authors, University of Melbourne Chair of Pediatric Neurology and Australian Health Director of Pediatrics, Ingrid Scheffer, told a reporter in 2016 she would not recommend cannabis for epilepsy treatments because of its unproven benefits and untested side-effects. Now she has changed her mind.

“If you can render any child or adult seizure free, that’s huge. It could contribute to stopping any further deterioration, or help development in a positive sense,” she said. “There have been anecdotal reports in the past, and people with firm beliefs that it works in epilepsy, but this is the first time it’s been proven.”

Ireland, a country that has not legalized medical marijuana, made an exception in November for a child with Dravet. The Irish minister for health signed a license for 7-year old Ava Barry to seek cannabis through a Dutch physician. In 2016, Barry’s mother, Vera Twomey, walked 150 miles from her home in the remote village of Aghabullogue to the Irish parliament in Dublin to highlight the issue.

Angie Weaver, the mother of Amelia, a 10-year-old Minnesota girl with Dravet syndrome, was instrumental in that state’s legalization of medicinal cannabis. At age 2, Amelia could count to 20 and recite the alphabet. Soon after, however, she was experiencing between 20 and 30 seizures a day, due to Dravet, and lost the ability to speak, walk, or feed herself. Her mother, Angie Weaver, campaigned for medical legalization, making her daughter the public face of medical cannabis. In 2015, medical cannabis was legalized in Minnesota, in part due to her efforts, and Amelia began treatments. She has since experienced marked improvements.

“Rather than becoming a medical refugee and treating her daughter by moving to Colorado, she stayed and fought,” said Andrew Bachman, an emergency room doctor who co-founded LeafLine Labs, a grower cannabis  “She is an absolute hero to me.”

The strain of cannabis that is used to treat Dravet is known as Charlotte’s Web, named for Charlotte Figi, who was suffering grand mal 300 seizures a week. Her heart stopped twice and she suffered dramatic declines before her parents decided to try cannabis oil, legal in their home state of Colorado, and she immediately improved. “I didn't hear her laugh for six months," said her mother, Paige Figi. "I didn't hear her voice at all, just her crying. I can't imagine that I would be watching her making these gains that she's making, doing the things that she's doing [without the medical marijuana]."

In Colorado, a child whose epilepsy has been treated with legal medicinal cannabis is now suing Jeff Sessions so that other kids who suffer from conditions that can be helped by the drug can access it — no matter where they live. Alexis Bortell, a 6th grader, says her family moved from Texas to Colorado so that she could access a medicinal strain of cannabis oil to treat her seizures. Texas doctors recommended brain surgery. Two drops of oil a day has kept her seizure free for two and a half years.  The federal prohibition on marijuana prevents her from returning to Texas. "I would like to be able to visit my grandparents without risking being taken to a foster home," Bortell said.

It’s not just kids who depend on medicinal cannabis. Veterans are another group that have found relief from the herb, particularly in the treatment of chronic pain and PTSD. Veterans are committing suicide at a rate of 20 per day. Veterans groups say that medical marijuana could ease suffering and reduce suicide rates among returning soldiers.

“We’ve got young men and women with PTSD and traumatic brain injuries coming to us and saying that cannabis works,” said Joe Plenzler, a spokesman for the American Legion, who says that cannabis could offer relief without the side effects of opioids and antidepressants. In 2016, the  American Legion petitioned the federal government to remove cannabis from the list of Schedule 1 narcotics (a list that includes heroin and LSD) and to license the FDA to conduct more research on medical uses.

Veterans groups say simple rescheduling the drug would make legal, scientifically proven medications available to people who desperately need it, and blame Jeff Sessions for unnecessarily leaving veterans to suffer. Nick Etten, executive director of Veterans Cannabis Project, said, “He is putting politics, antiquated policies and his own personal opinion ahead of the health needs of veterans in this country.”