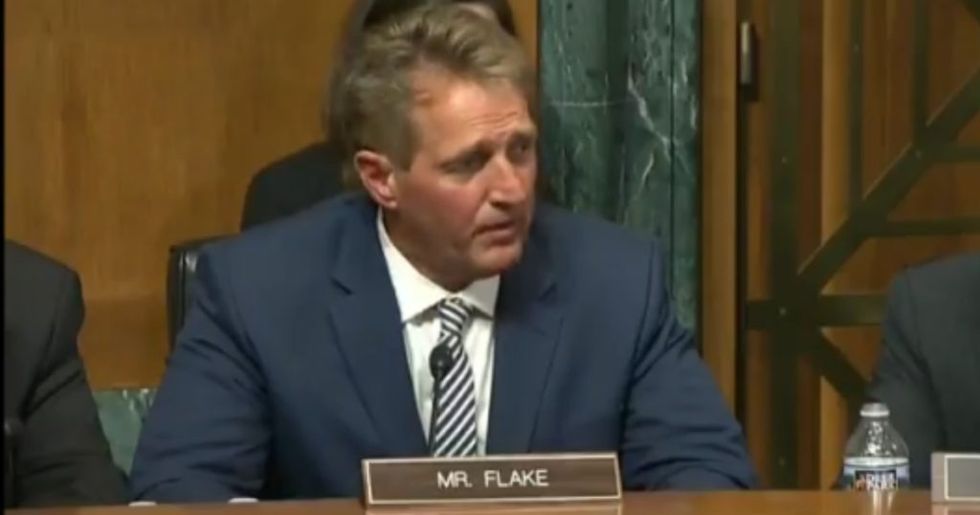 Senator Jeff Flake (R-AZ) on Friday demanded a week-long delay of the Senate floor vote to confirm Brett Kavanaugh to the Supreme Court so the FBI can have the opportunity to investigate allegations of sexual assault that have imperiled the judge's nomination.

“I think it would be proper to delay the floor vote for up to but not more than one week in order to let the FBI do an investigation limited in time and scope,” Flake said to his colleagues. "We ought to do what can to make sure we do all due diligence with a nomination this important."

Flake praised Committee chairman, Senator Chuck Grassley (R-IA), for "delaying the vote in this committee for a week" so that Ford could have the opportunity to testify. "So it's with that agreement that I'll vote to advance the bill to the floor," Flake said of Kavanaugh's potential confirmation.

Other Senators widely seen as on the fence on Kavanaugh have joined his call for a delay.

And now Senate leadership has responded. The Judiciary Committee announced it would request that the Trump administration instruct the FBI to "conduct a supplemental FBI background investigation.

And Senator John Cornyn -- the Senate's number two Republican -- confirmed leadership would allow for such a 1-week delay:

@politico Thank you @JeffFlake. This is a reasonable step and we appreciate that you proposed it. Unlike… https://t.co/I3SGCInDVI
— Ellen Levine (@Ellen Levine) 1538158758.0

@politico Wow! Finally a guy does the right thing regardless of party and gives potential victims some hope.… https://t.co/vzUW0HMfQm
— Warren Pughsley (@Warren Pughsley) 1538159188.0

The Associated Press reported Friday afternoon that Republican leadership in the Senate agreed to ask the White House to give the FBI until Friday, October 5 to conduct an investigation into the allegations against Kavanaugh. This would include interviewing witnesses listed in Ford's testimony, several of whom have signed sworn statements under penalty of perjury.

After a short period of uncertainty, President Donald Trump later in the day ordered the FBI to conduct an investigation that is "limited in scope" and to last no longer than a week, AP reported.

People on social media are generally supportive, particularly because they don't understand the GOP's rush to confirm Kavanaugh.

“I left the hearing yesterday with as much doubt as certainty," Flake said in a statement on Friday. "What I do know is that our system of justice affords a presumption of innocence to the accused, absent corroborating evidence."

On Thursday, Dr. Christine Blasey Ford, the first of three women that have publicly accused Kavanaugh of sexual assault, shared her story before the Committee. Kavanaugh followed with testimony in his defense, defiantly denying all the allegations.

Democrats on the Committee, led by ranking member Dianne Feinstein of California, pressed Kavanaugh on why he is against having the FBI investigate the allegations if he is indeed innocent.

Flake's request isn't the 'No' vote Democrats were hoping for, however, it does signal that the power of Ford's testimony is weighing heavily on lawmakers.

The Republican-controlled Senate had planned on holding final confirmation votes as soon as next week. Flake's conditional affirmative vote has, at the very least, bought time for more information to be gathered.

Shortly after the Committee vote, Senator Lisa Murkowski (R-AK) - one of only two pro-choice Republicans in the Senate - said she supported giving the FBI a week to investigate the charges against Kavanaugh. Chairman Grassley raised no objection.

Flake's compromise may be related to confrontations he had with protesters Friday morning. The Senator was approached by several women explaining that they were survivors of sexual assault, begging him to consider the message his support of Kavanaugh would send.