Jeff Flake Just Issued Mitch McConnell an Ultimatum in Hopes of Preserving the Mueller Probe, but People Are Skeptical 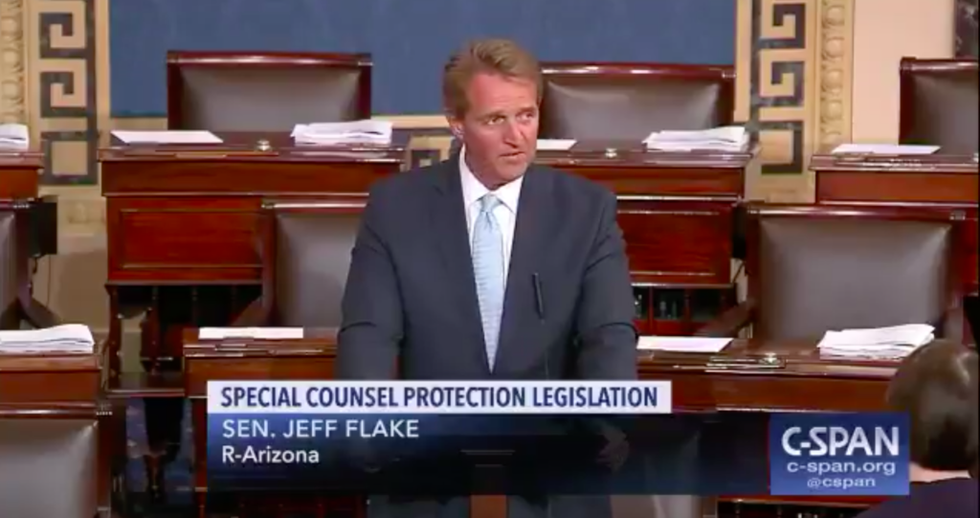 With the departure of Attorney General Jeff Sessions from the administration of President Donald Trump, concerns regarding the protection of Special Counsel Robert Mueller's investigation into Russian election interference have never been more urgent. The President has sought to hinder the investigation at every turn and detested Sessions when he recused himself from overseeing the investigation - a move Trump saw as a betrayal.

Since Sessions' departure, Trump has appointed the former Attorney General's Chief of Staff Matthew Whitaker as acting AG. Like Trump, Whitaker is starkly against the Russia investigation, and many believe that allowing him to oversee it would bring the investigation to a halt.

Flake (R-AZ) announced on the Senate floor that he would not approve any of the pending Judicial nominees until his colleagues passed the Special Counsel Independence and Integrity Act. The bill would amend the powers of appointing and firing special counsel and require that the counsel be given written notice specifying the reasons for removal.

This isn't the first time Sessions has broken with the Republicans loyal to the President, but the times anything substantive came of his moderation can be counted on one hand. During the confirmation hearings of now-Justice Brett Kavanaugh, Flake abstained from voting until an FBI investigation into the multiple allegations of sexual assault against the nominee could be performed.

Despite the investigation having an extremely limited scope and being performed in under a week, Flake fell back in line to vote for Kavanaugh anyway.

Now, Americans are having Deja vu.

Even if Flake is being sincere, one crucial factor makes the gesture seem hollow to many.

Senator Flake has made clear his intentions to depart from the Senate in January, with Democrat Kyrsten Sinema having won his seat.

Though Sinema will almost certainly fight to protect Special Counsel Mueller's investigation, Flake's words were rang hollow to some when factoring in his impending departure.

Interesting how Jeff Flake has suddenly developed the testicular fortitude to speak out against Trump now that he's… https://t.co/R2FuVmMghe
— Lucifer (@Lucifer) 1542235857.0

Though uncertainty still casts a shadow over Mueller's investigation, it's clear that it won't fizzle without a fight.