Judge Jeanine Pirro Just Got Smacked Down by Fox News for Her Slanderous Rant About Rep. Ilhan Omar Wearing a Hijab 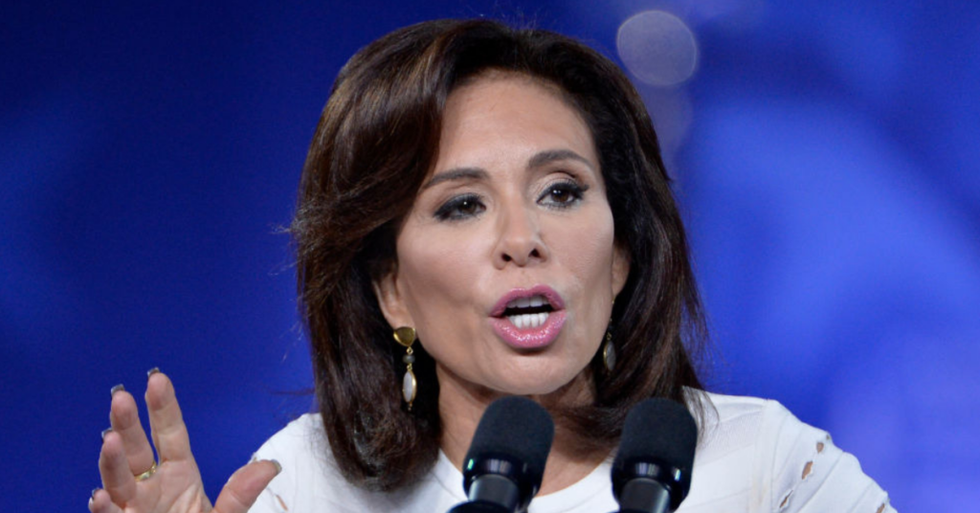 Fox News has condemned host Jeanine Pirro after she suggested Representative Ilhan Omar's (D-MN) use of a hijab could be "indicative of her adherence to Sharia law, which in itself is antithetical to the United States Constitution."

"We strongly condemn Jeanine Pirro’s comments about Rep. Ilhan Omar. They do not reflect those of the network and we have addressed the matter with her directly," the network said in a statement.

The statement comes a day after Pirro attacked Omar for comments critics say are antisemitic:

"Your party is not anti-Israel, she is. Think about this. She's not getting this anti-Israel sentiment doctrine from the Democrat Party. So if it's not rooted in the party, where is she getting it from? Think about it. Omar wears a hijab, which according to the Quran 33:59, tells women to cover so they won't get molested. Is her adherence to this Islamic doctrine "indicative of her adherence to Sharia law, which in itself is antithetical to the United States Constitution?"

Critics have railed against Pirro since she made the remarks.

It's worth remembering that the last time Fox News publicly called out its talent, it was ALSO Jeanine Pirro, who a… https://t.co/F8wWQz9RAu
— Jeremy Barr (@Jeremy Barr) 1552278909.0

Fox News: "we strongly condemn Jeanine Pirro's comments about Rep. Ilhan Omar. They do not reflect those of the net… https://t.co/PLLTuYoYH2
— Scott Dworkin (@Scott Dworkin) 1552275128.0

Pirro has attempted to clarify her remarks.

“I’ve seen a lot of comments about my opening statement from Saturday night’s show and I did not call Rep. Omar un-American,” Pirro said. “My intention was to ask a question and start a debate, but of course because one is Muslim does not mean you don’t support the Constitution.”

Pirro said Omar is welcome “to come on my show any time to discuss all of the important issues facing America today.”

Omar came under fire for tweets many considered antisemitic when criticizing the amount of political donations from the American Israel Public Affairs Committee (AIPAC).

While the PAC is certainly influential, many felt that accusing it of using money to control Washington fed into the antisemitic conspiracy theory that a network of Jewish people use their money to sway the world in their favor. Omar soon heartily apologized.

Many on the right have seized on Omar's remarks, saying they are an indication of racial animus within the Democratic Party. The House passed a resolution condemning antisemitism last week.

Pirro isn't the only Fox News personality wrapped in scandal this week.

Calls to boycott Fox News personality Tucker Carlson’s program if not fire him outright have intensified since media watchdog Media Matters surfaced audio of Carlson arguing that women are “extremely primitive” beings who “just need to be quiet and kind of do what you’re told” when he called into a shock jock radio show.

Fox News has declined to comment on the scandal and Carlson has not apologized for his remarks, though he issued a statement via his official Twitter account.

“Media Matters caught me saying something naughty on a radio show more than a decade ago,” he said in part. He added: “Anyone who disagrees with my views is welcome to come on and explain why.”