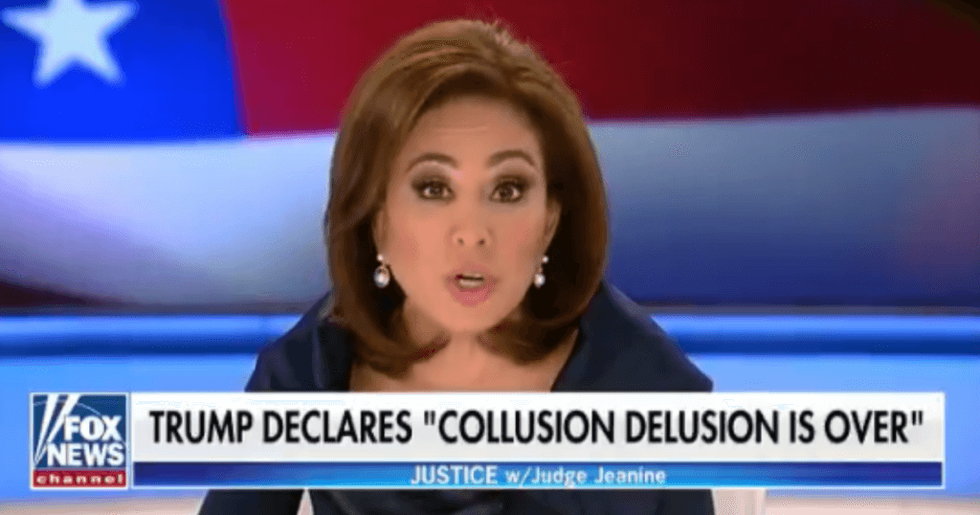 Judge Jeanine Pirro returned to Fox News over the weekend following a two-week suspension for making anti-Muslim comments. She wasted no time grilling up fresh red meat for her audience during the Saturday broadcast of her show, Justice with Judge Jeanine.

Pirro called for the “traitorous, treasonous” critics of President Donald Trump to be made an example of as the country eagerly awaits the details of Special Counsel Robert Mueller's investigative findings.

"The collusion conspiracy is debunked," Pirro proclaimed (it isn't). "Will there be an investigation into how all this nonsense started in the first place?" Pirro asked, referring to Mueller and his probe of Trump's connections to Russia.

Pirro then misled her viewers on what treason is. Spoiler: investigating a president suspected of conspiring with a hostile foreign power to steal an election is not treason. Inconvenient, maybe, but not treason.

“I can guarantee you it will happen again,” she told her guest, Corey Lewandowski, the one-time chair of Trump's 2016 campaign, “unless we make an example of the traitorous, treasonous group that accused Donald Trump of being an agent of the Russian government. And as they spewed their hate I want to know who did the unmasking, who did the leaking and if we don’t have a consequence of the highest level of government are not held responsible for this… it is a blueprint for a future effort to overthrow the government.”

Democrats "will continue to overreach," Lewandowski replied, "continue to press for impeachment, they are going to continue to remind the American people that their party has no ideas. And all this President does is deliver every time-- promises made and promises kept.”

Pirro also distorted the facts surrounding the Mueller report, which the public has not yet seen. The only information has come from Attorney General William Barr, who in a brief summary that he has begun walking back, said Mueller found "no collusion" and was unable to make a determination on if Trump obstructed justice.

Mueller was appointed in May 2017 because Trump fired FBI Director James Comey over "this Russia thing."

Barr also stated in his letter to Congress- which has been wildly misrepresented by Trump and his supporters - that the report "does not exonerate" the president.

Not that it mattered to Trump's legal muses.

This is on Sunday when Jay and I received the word that the President had been exonerated. It is really so satisfyi… https://t.co/1yCw2F0KWM
— Rudy Giuliani (@Rudy Giuliani) 1553753181.0

“Don’t be satisfied with the Mueller report," Pirro continued. "This is bound to happen again because these arrogant, lying, condescending, leaking haters of you and me and America that doesn’t have power are gonna do it again unless we stop them. And the only way to stop them is with justice, true justice and that is behind the bars justice.”

Nevermind that petitioning the government and "redressing grievances" are engrained into the First Amendment of the American Constitution.

Pirro's thirst for political retribution, to many, is part of a larger insular bubble that includes the president and his allies.

Earlier in the day, Giuliani equated the Russia investigation with a coup.

"The collusion with Russia, we now know, was contrived. Some people created it to prevent, and as an insurance policy to remove, @realDonaldTrump if elected," the former New York City mayor tweeted. "To prevent this from happening to another President, all those responsible must be identified and, if appropriate, punished."

The collusion with Russia, we now know, was contrived. Some people created it to prevent,and as an insurance policy… https://t.co/cv7Qgp8A8Y
— Rudy Giuliani (@Rudy Giuliani) 1554055474.0

Trump would repeat this but in his own style.

"Everybody is asking how the phony and fraudulent investigation of the No Collusion, No Obstruction Trump Campaign began," Trump tweeted on Sunday. "We need to know for future generations to understand. This Hoax should never be allowed to happen to another President or Administration again!"

Everybody is asking how the phony and fraudulent investigation of the No Collusion, No Obstruction Trump Campaign b… https://t.co/3zrqBpV5Pq
— Donald J. Trump (@Donald J. Trump) 1554060084.0

If Dems continue to support Schiffer, he will be the poster boy of their party. He sees nothing wrong with supporti… https://t.co/weZ4GsODPg
— Rudy Giuliani (@Rudy Giuliani) 1553870056.0

On Thursday, Trump took it one step further and demanded the resignation of Schiff for "knowingly and unlawfully lying and leaking." The president, as usual, offered no evidence to support this claim.

Trying to sway public opinion on what are still unresolved issues - collusion with Russia and obstruction of justice - is one thing. Advocating for "punishing" political opponents is quite another.