Donald Trump Doubled Down on His Plan to Arm Teachers, and a Democratic Governor Just Shut Him Down 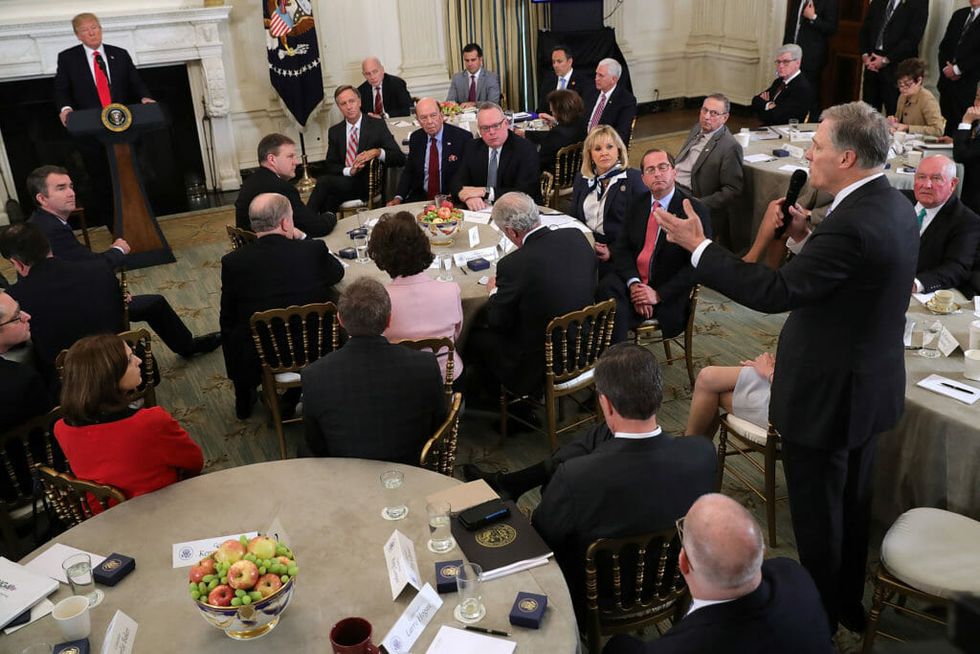 During a meeting between President Donald Trump and state governors at the White House on Monday, Washington State's Democratic Governor Jay Inslee challenged Trump on the idea of arming teachers.

In his challenge to Trump, who appeared quite uncomfortable throughout the entire exchange, Inslee suggested that we need "a little less tweeting here, and a little more listening, and I just suggest we take [Trump’s proposal] off the table and move forward.”

One Twitter follower, s boblit, pointed out that the President "looked like he could barely control himself from exploding" while Inslee spoke.

Teachers and even some Republican politicians have come out in droves against the idea of putting guns in classrooms, including Governor Rick Scott (R-FL), who has an A+ rating with the NRA. Senator Marco Rubio (R-FL) expressed that "the notion that my kids are going to school with teachers that are armed with a weapon is not something that, quite frankly, I’m comfortable with,” during a CNN town hall last week.

The prospect of arming teachers has resurfaced since the massacre that killed 17 people at Marjory Stoneman Douglas High School on Valentine's Day, and Trump has expressed the willingness to explore the idea. The National Rifle Association, from whom Trump received nearly $30 million in campaign donations, fully supports arming teachers. Arming teachers is currently legal in eight states, which Trump pointed out in his response to Inslee.

Trump has not yet suggested arming all teachers, however. Instead, he has proposed giving "concealed guns" and extra pay to a select group of teachers who would be specially trained to handle firearms.

It's easy to see why there is so much confusion surrounding the President's stance on this issue. In a single, seemingly contradictory tweet last Thursday, Trump said he "never said give teachers guns," and then suggested we give guns to "20% of teachers."