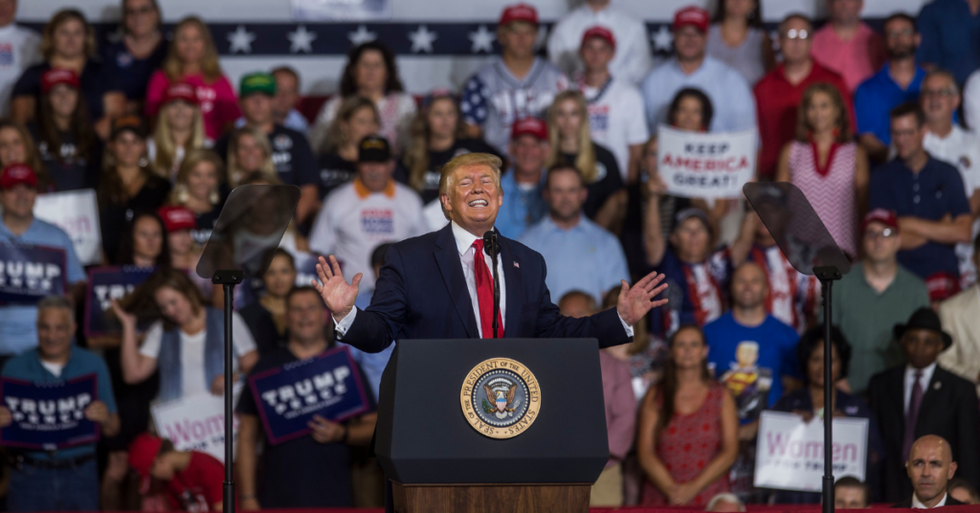 After several days of facing backlash over racist posts made on Twitter, President Donald Trump held a Make America Great Again (MAGA) rally in Greenville, North Carolina. As expected, chants were a part of the latest MAGA rally.

But after Trump's repeated attacks trying to vilify the Congresswomen he targeted in his racist tweets, a new chant emerged:

When the President of the United States used his time in front of a crowd to denigrate Democratic Representative Ilhan Omar of Minnesota—the only one of the women of color Trump attacked not born in the USA—the North Carolina crowd began to chant "send her back." The President stopped and listened, but did not tell the crowd to stop.

People found the open racism and failure to take responsibility for it disturbing enough. But the President encouraging racist attacks against a sitting member of Congress in a rally was worse according to Jason Stanley, an expert on fascism.

Fascism is "a form of radical right-wing, authoritarian ultranationalism characterized by dictatorial power, forcible suppression of opposition and strong regimentation of society and of the economy." It is marked by exaltation of nation and often race above the rights of individuals, especially minorities and that stands for a centralized autocratic government headed by a dictatorial leader.

I am not easily shocked. But we are facing an emergency. Journalists must not get away with sugar coating this. Thi… https://t.co/Dr0fbKxddt
— Jason Stanley (@Jason Stanley) 1563408859.0

Stanley was not alone in his expert assessment.

In my book “From Fascism to Populism” I explain why trumpist racism makes his populism closer to fascism than ever… https://t.co/aYFfGd3bYY
— Finchelstein (@Finchelstein) 1563460323.0

I don't care what your textbook says about fascism: when a white crowd howls for the deportation of an American law… https://t.co/RT5wWCpeH5
— Paul Mason (@Paul Mason) 1563444683.0

This is how authoritarian fascism eventually evolves into full-blown murderous fascism. I have resisted Hitler comp… https://t.co/xKbR0h5faR
— Jordan (@Jordan) 1563408952.0

Writer David Roth noted the fascism is a byproduct of Trump's influencers, not a grand design by the man himself.

This is how conservative media works re: staking out extreme positions and making pols gesture in that direction. T… https://t.co/Z5HTlqPiEU
— David Roth (@David Roth) 1563420576.0

Some Trump ride or dies even jumped ship after the North Carolina MAGA rally performance. After years of tolerating "build the wall" and "lock her up," "send her back" was a bridge too far.

“what happened in North Carolina last night was not just racist-fueled demagoguery but bordered on fascism” When e… https://t.co/SmsRW1NEff
— Mehdi Hasan (@Mehdi Hasan) 1563460087.0

When someone like Piers Morgan says your racist attacks are too much, it may be time for some self evaluation. However history shows President Trump never has admitted his mistakes or accepted responsibility for his own actions.

It's unlikely to begin now.

Jason Stanley's book, How Fascism Works: The Politics of Us and Them is available here. Stanley is also the author of How Propaganda Works, available here.