An MSNBC Panelist Revealed The Sources of Trump's Anger, And His Explanation Makes a Lot of Sense 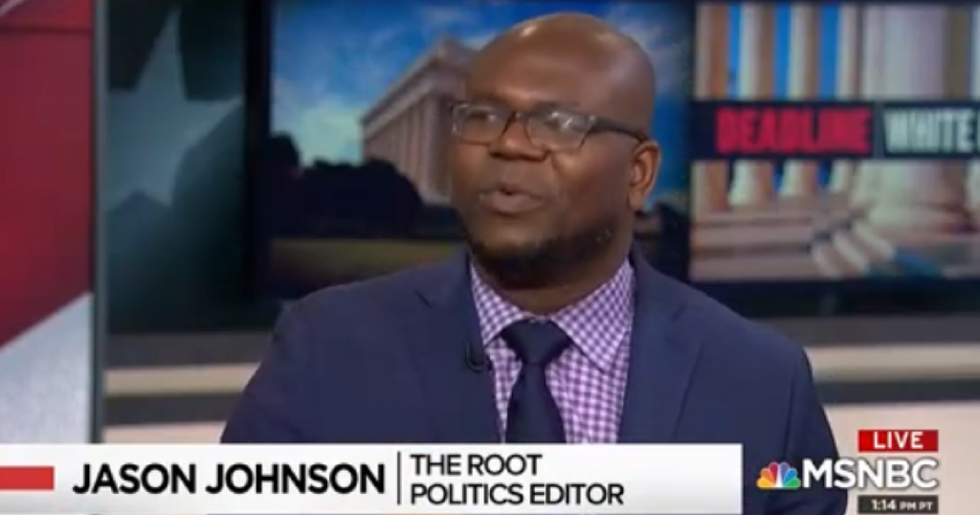 Johnson explained in an exchange with MSNBC's Nicolle Wallace that Cohen and Manafort are the "beginning of Trump being exposed."

Johnson and Wallace were discussing a report from Politico which described the president's darkening mood as Manafort's trial comes to a close.

Trump’s mood has darkened during periods when the Russia story has dominated, according to close confidants. “Every day you wake up and it’s Manafort this, Manafort that. It’s crazy,” said one close adviser. “How do you get away from it?”

Wallace suggested Trump could "get away from" worrying about Manafort, who is on trial for a slew of financial crimes, by next time not hiring a campaign manager "who offers to work for free and has a dirty book of business."

Manafort ran Trump's presidential campaign for five months in 2016 for free, and Trump has said that he didn't know Manafort all that well. The two have allegedly known each other for thirty years and even lived in the same building.

Johnson concurred with Wallace, adding that Manafort and Cohen represent a substantial portion of Trump's stress and anger.

"A lot of it is Manafort," said Johnson. "There have been some small fish [special counsel Robert] Mueller has been able to grab and flip. Cohen and Manafort are the beginning of Trump being exposed. He can’t hide from these men because they worked with him very closely."

Trump's TV lawyer Rudy Giuliani appeared to confirm this to Politico, telling the publication: “The only thing he [Trump] keeps reiterating is he thinks Manafort has been treated in an unfair way for a guy who’s alleged to have committed a white-collar crime."

Cohen, whose home and office were raided by the FBI in April, has admitted to making secret recordings of his meetings with Trump throughout their working relationship.

Johnson said that Trump's fear of those tapes, or other evidence being released, are "where a lot of this anger comes from." No criminal charges have been filed against Cohen, however.

Johnson then suggested that it's not legal consequences Trump is afraid of, but rather, political fallout, which could include impeachment if Democrats retake Congress in November.

It’s going to ratchet up not just because the investigation continues, but as we look at the possibility of Democrats retaking the House and all of this turning into an impeachment proceeding may be in the fall of 2019, that is what this president truly fears.

Johnson said this is evident by Giuliani's meandering justifications for Trump's sketchy behavior. "They come up with a new explanation every five minutes," Johnson said, "but politically he [Trump] is really concerned about this."

Phil Rucker of the Washington Post added that another concern of Trump's should be Democratic control of House oversight committees, who Rucker said "will be digging" around Trump's businesses and entanglements.

Rucker said Trump is also worried about possible indictments of members of his family, such as Donald Trump Jr. and Jared Kushner, as Special Counsel Robert Mueller's investigation closes in on the president's inner circle.