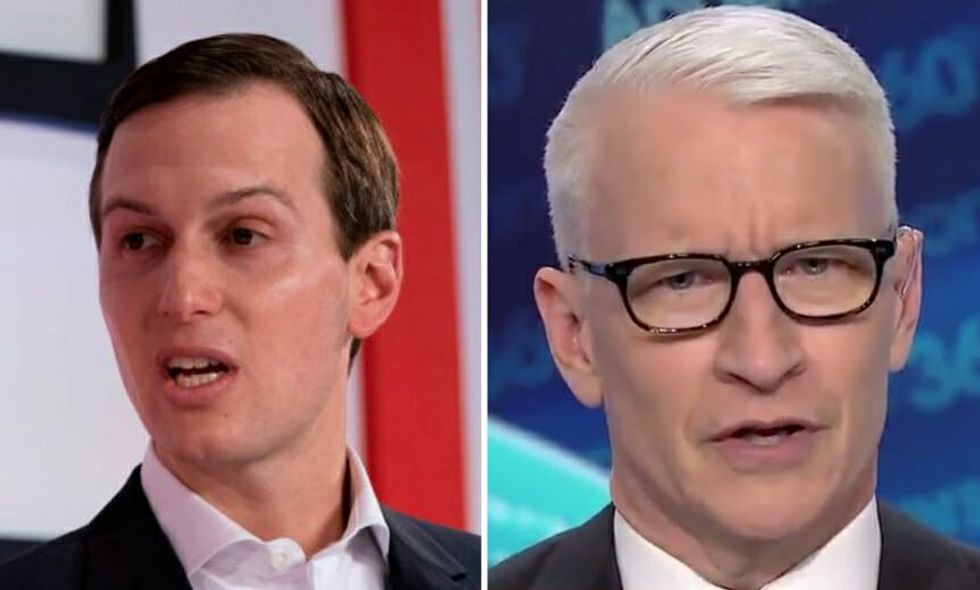 Jared Kushner, President Donald Trump's son-in-law and Middle East peace czar, is facing heat for comments he made on Tuesday about Special Counsel Robert Mueller's report on Russian interference in the 2016 election.

“You look at what Russia did: buying some Facebook ads to try to sow dissent. It’s a terrible thing, but I think the investigations and all of the speculation that’s happened for the last two years has had a much harsher impact on our democracy than a couple Facebook ads," Kushner said at the annual Time 100 summit. "If you look at the magnitude of what they did and what they accomplished, the ensuing investigations have been way more harmful to our country.”

Russia “demonstrated a significant escalation in directness, level of activity, and scope of effort compared to previous operations," Mueller wrote in his 448-page report.

On Tuesday night, Anderson Cooper tore into Kushner for trying to gaslight the public about what Mueller determined.

“Who else other than maybe that Cliff guy could sum up such a long, dense document so concisely?” Cooper quipped. "Who else could take this, the lead sentence of the Mueller report, and interpret it so smartly?"

Cooper knocked Kushner for his "Kushner notes" version of the report, which downplay the significance of Mueller's findings - that Russia orchestrated a massive disinformation campaign on social media to prop up Trump and wound his political rival, Democrat Hillary Clinton.

Cooper also noted that the Mueller report outlines how Trump campaign operatives "promoted dozens of tweets, posts, and other political content" drummed up by the Russians.

This is deeply concerning.

"Well, it was a lot more than Facebook ads," the senior White House correspondent said. "There were Russian operatives organizing real events during the campaign, so it had a real-world impact on their social-media campaign.”

“Not only that,” Bennett added, “but Russia was actively hacking and stealing documents that they then systematically released at certain key points during the campaign. One of the biggest things I think that doesn’t sit well with the public is: Why didn’t the Trump campaign openly say ‘Russia, we don’t need your help. We don’t want your help. Please stop.’”

Instead of conceding that he was wrong, Kushner doubled down.

“The one thing the Mueller report was conclusive on is that there was no coordination or collusion with the Trump campaign [and Russia]," Kushner said. "Everything the president’s been saying and I’ve been saying for two years has been fully authenticated.”