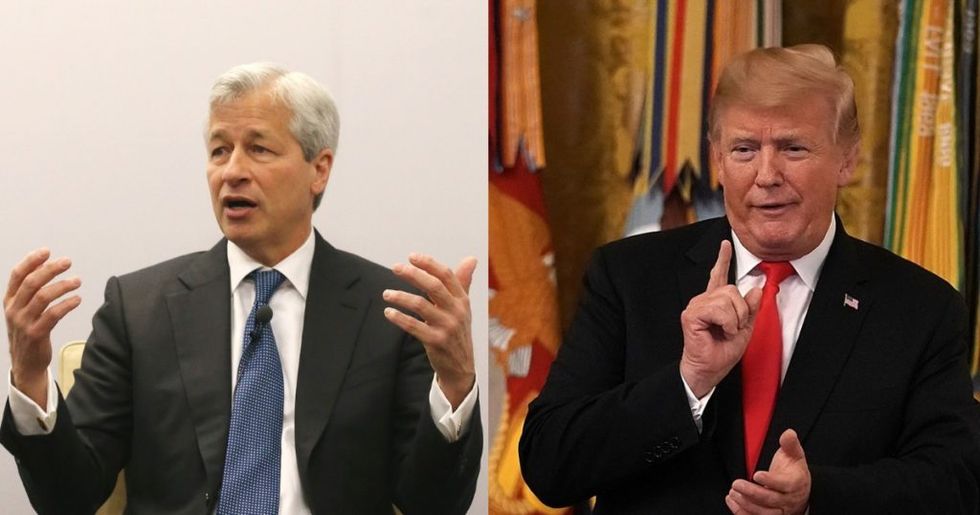 Dimon was speaking at an event at his company's Manhattan headquarters on Wednesday, where he said he was "smarter" than Trump and could easily defeat him.

"I think I could beat Trump," Dimon said. "Because I'm as tough as he is, I'm smarter than he is."

Dimon hinted that he was tougher than the president, saying that Trump "could punch me all he wants, it wouldn't work with me. I'd fight right back."

The 62-year-old CEO and megadonor to the Democratic Party also took a swipe at Trump's wealth: "And by the way, this wealthy New Yorker actually earned his money," Dimon said. "It wasn't a gift from Daddy," referring to the millions of dollars Trump inherited from his real estate developer father Fred.

Dimon quickly walked back his comments, however, and enthusiastically denied any intention of running for president.

"I should not have said it. I'm not running for President," he said. "Proves I wouldn't make a good politician. I get frustrated because I want all sides to come together to help solve big problems."

In his first tweet of the day on Thursday, Trump fired back at Dimon as only Trump can, chiding Dimon as "a poor public speaker" and "nervous mess."

"The problem with banker Jamie Dimon running for President is that he doesn’t have the aptitude or “smarts” & is a poor public speaker & nervous mess - otherwise he is wonderful," Trump said in a pre-dawn tweet. "I’ve made a lot of bankers, and others, look much smarter than they are with my great economic policy!"

Twitter jumped to Dimon's defense, with many agreeing that he is probably smarter than Trump.

Trump himself wasn't shown much mercy.

And if you read the transcripts from his rallies, you'll see Trump rarely speaks in complete sentences.

@realDonaldTrump Jamie Dimon is without question smarter than you. Although as you've proven in you presidency it o… https://t.co/8ioWaVXC9U
— Impeach-Trump (@Impeach-Trump) 1536846344.0

Then there was this gem in Montana last week.

Harsh, but not necessarily wrong.

@realDonaldTrump This tweet is the strongest argument for Congress to establish basic qualifications for anyone run… https://t.co/g9Ed5rTdPh
— trueblu (@trueblu) 1536845502.0

This person has a point.

The president's behavior speaks for itself.

@realDonaldTrump Coming from our president who has no smarts, is a nervous mess, & is a poor public speaker! YOUR e… https://t.co/ZPXnEe2KC3
— brightmyer (@brightmyer) 1536846416.0