Republican Senator Tried to Draw an Equivalency Between Pipe Bombs Being Sent to Democrats and Protesters Shouting at Republicans, and It Did Not Go Well 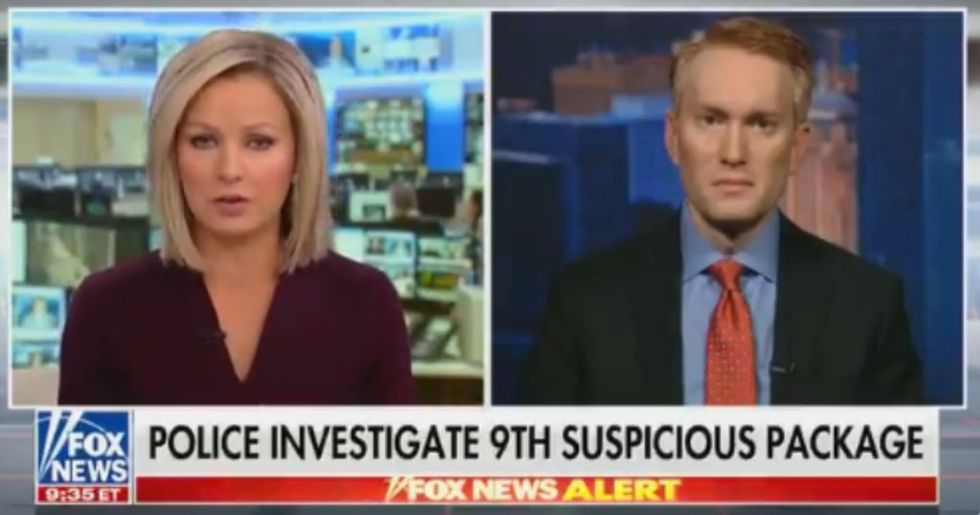 Senator James Lankford (R-OK) on Thursday tried to equate peaceful protests with the string of attempted bombings that have paralyzed the country since Wednesday.

In the wake of nearly a dozen prominent Democrats being targeted by pipe bombs, Lankford said on Fox News that targeting political rivals with terrorism "is not who we are as Americans," condemning the use of violence as a means to political ends.

But it was Lankford's comparison to the confirmation hearings of Supreme Court Justice Brett Kavanaugh that have sparked some pretty harsh backlash. Lankford charged that activists disrupting Kavanaugh's hearings were just as bad as whoever has been mailing bombs to President Donald Trump's rivals.

"It wasn't appropriate during the hearings to come in and scream at people," Lankford said. "This is not how we should handle our differences."

Lankford cited other instances - such as the shooting of a Congressional baseball game and the intimidation of Senator Ted Cruz (R-TX) during the 2016 campaign - as other examples of unacceptable behavior.

He also said that blaming Trump and his divisive rhetoric for Wednesday's events is "absurd."

Those who "try to blame President Trump [for the attempted bombings] is absurd," Lankford added. "We didn't try to blame Democrats when a shooter came for Republicans on a baseball field."

Twitter tore into Lankford for the parallels he was drawing.

The "whataboutism" - in this case, alluding to protests as if they constitute terror, is galling.

Free speech includes the right to scream. Screaming does not equal bombing.

@atrupar @everyhumanknows @SenatorLankford So Lankford thinks that protesting and freedom of speech is the same as sending out a bomb?
— Banjo (@Banjo) 1540477140.0

The double-standard applied to the Kavanaugh hearings is even more disturbing when coupled with the way his accusers were treated.

Dr. Christine Blasey Ford, whose account became public last month and led to her enthralling Senate testimony, has in the weeks since had to abandon her home and hire private security to stave off the barrage of death threats she has received.

Her plight - now twice as a victim - continues to be unacknowledged by Republicans.

@atrupar @SenatorLankford Yes, I agree that Kavanaugh shouldn't have been screaming at his hearing.
— Problem Seal (@Problem Seal) 1540489602.0

The public's disapproval of Kavanaugh and the majority opposition to his confirmation has also been ignored.

Kavanaugh is motivating Democrats to vote more than Republicans. With the midterms less than two weeks away, Republicans would be wise to listen.