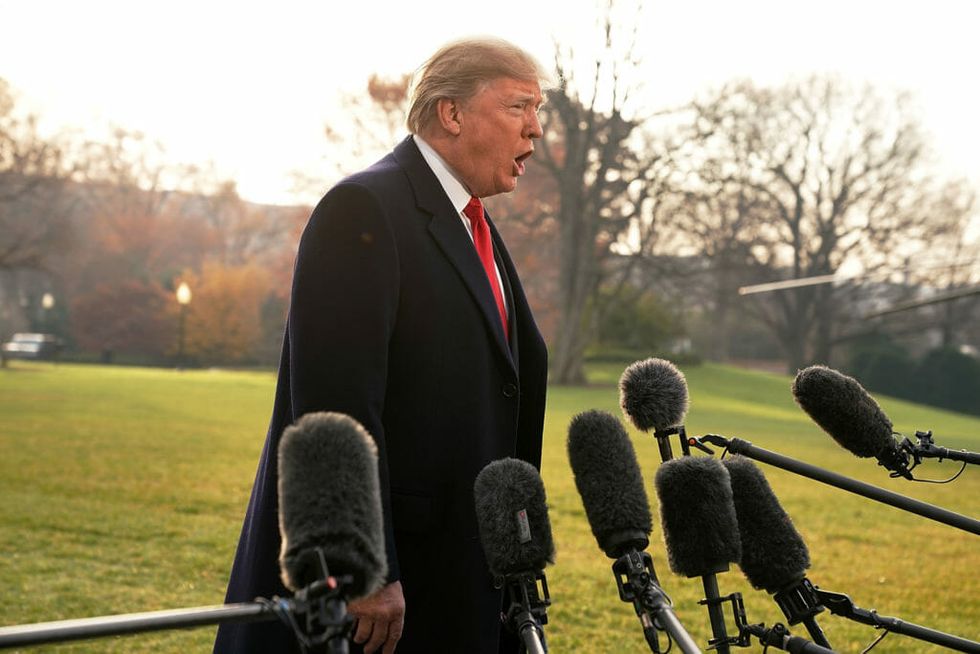 WASHINGTON, DC - DECEMBER 04: U.S. President Donald Trump speaks to members of the media on former national security adviser Michael Flynn's lying to the FBI prior to his Marine One departure from the South Lawn of the White House December 4, 2017 in Washington, DC. President Trump is traveling to Utah to announce his plan to shrink the Bears Ears and Grand Staircase-Escalante national monuments. (Alex Wong/Getty Images)

In yet another attempt to discredit the ongoing Russia probe, President Donald Trump used his Twitter account to attack the FBI over the weekend, railing against former FBI director James Comey while––once again––evoking the specter of Hilary Clinton and the investigation into her use of a private email server during her tenure as Secretary of State (no charges were brought against Clinton and her team).

"After years of Comey, with the phony and dishonest Clinton investigation (and more), running the FBI, its reputation is in Tatters - worst in History!" the president tweeted. "But fear not, we will bring it back to greatness."

Trump's comments about the FBI promoted Comey to defend the bureau in a response on Twitter. “I want the American people to know this truth: The FBI is honest. The FBI is strong. And the FBI is, and always will be, independent," he wrote.

Former acting Attorney General Sally Yates, who in January informed the Trump administration that she believed Flynn had misled senior White House officials about his conversations with Kislyak and that he had been compromised by Russian interests, also weighed in. “The FBI is in ‘tatters’? No. The only thing in tatters is the President’s respect for the rule of law. The dedicated men and women of the FBI deserve better,” she wrote. (Trump fired Yates on January 30 after she defied his travel ban.)

Former Attorney General Eric Holder went even further, issuing a scathing response. "Nope. Not letting this go. The FBI’s reputation is not in “tatters”. It’s composed of the same dedicated men and women who have always worked there and who do a great, apolitical job. You’ll find integrity and honesty at FBI headquarters and not at 1600 Penn Ave right now," he wrote.

The FBI Agents Association, which is made up of more than 14,000 acting and former special agents, also released a statement.

But the president's comments about the FBI's reputation were far from the only attacks he leveled against the agency.

He seized on a report that FBI officer Peter Strzok had been dismissed from the investigation after his superiors discovered he had made anti-Trump remarks in text messages.

Trump's attempts to deflect blame have continued to complicate matters, particularly after he tweeted over the weekend that he had known Flynn had lied to White House officials, contradicting his own account from the time. Senior Democrats suggested the tweet was Trump's admission that he had knowingly obstructed justice.

Trump's personal lawyer, John Dowd, later said he drafted the president's tweet. The White House, which has insisted that tweets from the president should be taken as official statements, declined to comment. Dowd, for his part, insisted he "did not mean to break news." In an exclusive interview with Axios reporter Mike Allen, Dowd insisted that a president cannot be guilty of obstruction of justice.

The "President cannot obstruct justice because he is the chief law enforcement officer under [the Constitution's Article II] and has every right to express his view of any case," Dowd claims.

Yesterday, Trump issued a denial that he had pushed Comey to drop the investigation into Flynn, branding it "fake news."

But the facts tell a different story. Trump fired Comey on May 9, an action which, many legal experts say, constitutes grounds for an investigation of Trump for possible obstruction of justice. A New York Times report the following Monday revealed that Trump asked Comey to halt the criminal investigation into Flynn.