James Comey Just Explained Why He Plans to 'Resist' New House Republican Subpoena, and People Are on Board 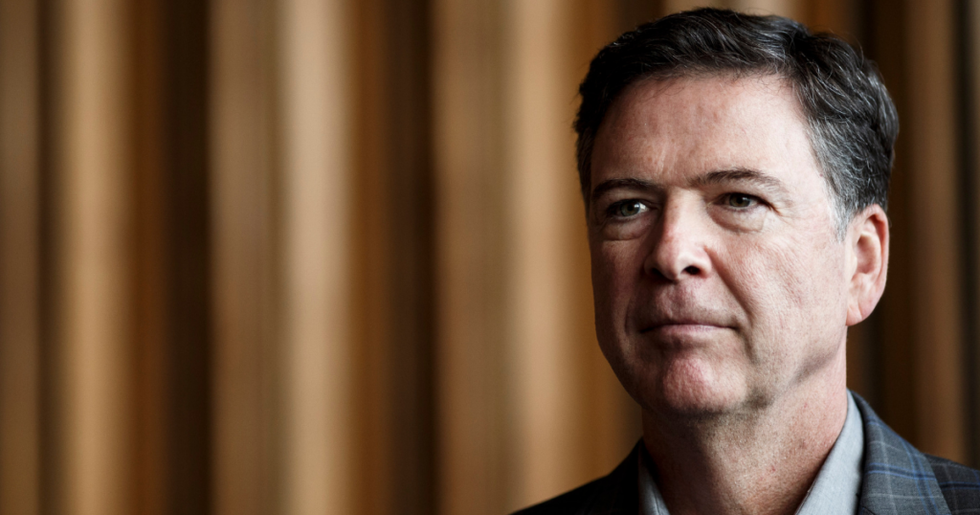 BERLIN, GERMANY - JUNE 19: Former FBI Director James Comey talks backstage before a panel discussion about his book 'A Higher Loyalty' on June 19, 2018 in Berlin, Germany. Comey is in Berlin at the invitation of the American Academy in Berlin. (Photo by Carsten Koall/Getty Images)

Republicans on the U.S. House Judiciary Committee this week subpoenaed former FBI Director James Comey and ex-Attorney General Loretta Lynch to discuss their respective involvement in the 2016 presidential campaign. According to the subpoenas, they are due to testify in private on December 3 and 4 respectively.

But Comey has announced he plans on resisting the subpoena -- a last-ditch chest-thumping by ranking Committee member Bob Goodlatte (R-VA) in the final weeks of the GOP's majority in the House -- unless he is allowed to testify publicly.

In a "Happy Thanksgiving" tweet on Thursday, Comey said he would be "happy to sit in the right and answer all questions," but will "resist a “closed door” thing because I’ve seen enough of their selective leaking and distortion."

"Let's have a hearing," he added," and invite everyone to see."

Happy Thanksgiving. Got a subpoena from House Republicans. I’m still happy to sit in the light and answer all quest… https://t.co/8eQVhlO40w
— James Comey (@James Comey) 1542900090.0

“Mr. Comey embraces and welcomes a hearing open to the public, but the subpoena issued yesterday represents an abuse of process, a divergence from House rules and its presumption of transparency. Accordingly, Mr. Comey will resist in court this abuse of process.”

Following his tweet, Comey has been enjoying an impressive amount of support on social media.

@Comey Perhaps #HouseReplublicans want to talk to #Comey about #IvankasEmails in private, so no one will know.… https://t.co/MOndgUlGZR
— Taiwan Martinez (@Taiwan Martinez) 1542981308.0

People are all about keeping the foundering GOP in check.

@stevenjwhite @Comey Exactly. Yet they have the cojones to act like trump is above a subpoena. Bad look. Cant they… https://t.co/LUOS0WFUlf
— ArielJohnson (@ArielJohnson) 1542992671.0

@Comey @TheMicheleWojo since you no longer have a security clearance, nothing discussed would be secret so it SHOULD be open and televised.
— Sue Voted. (@Sue Voted.) 1542982364.0

People think they know why the Republicans don't want the testimony to be public.

@FireZMissiles @phinathome @Comey I wouldn't have wanted to be in his shoes given the political environment these d… https://t.co/sgtQizTwgR
— Danton's Head (@Danton's Head) 1542991297.0

Many think the closed-door request by Republicans shows they are not interested in the truth, just political saber-rattling.

@kyledcheney Mr Comey's statement says all that needs to be said. This is a last gasp, political stunt on the part… https://t.co/5eCll5FNOJ
— Richard M Dennis (@Richard M Dennis) 1542909675.0

President Donald Trump fired Comey in May 2017 because of the investigation into the Trump campaign's ties to Russia, which Trump refers to as a "hoax" and "witch hunt."

Comey continues to be a favorite target of Trump, who has boasted that Comey and Special Counsel Robert Mueller are "best friends." Trump has long insisted without evidence that Comey and the FBI were part a conspiracy to sabotage his campaign.

It is widely accepted that Trump's 2016 victory was due in significant part to Comey's October 2016 announcement that the FBI was reopening its probe into Hillary Clinton's emails - which ended up fizzling into nothing, but the damage was done.

Earlier this week, the New York Times reported that Trump wanted to have the Justice Department arrest Comey and Clinton, demonstrating an egregious attempt by the president to abuse his power.

As far as Lynch, who left office in January 2017, she has been vilified by Trump and his Republican allies for a brief encounter she had with former President Bill Clinton on an airport tarmac in June 2016.

Republicans, along with the president, have claimed without evidence that Lynch, who was still attorney general in 2016, and the former president, were in cahoots in a secret plot to derail Trump's presidential ambitions.

Like Comey and his attorney, Democrats have vowed to buck Republican attempts to further smear Comey and Lynch before their majority in the House ends in January.

"It is unfortunate that the outgoing Majority is resorting to these tactics," Congressman Jerry Nadler (D-NY), the ranking member on the Committee, said in a statement on Friday.

"Months ago, Director Comey and Attorney General Lynch both indicated their willingness to answer the Chairman's questions voluntarily," Nadler wrote. "My understanding is that the Republicans have had no contact with either the Director or the Attorney General since."