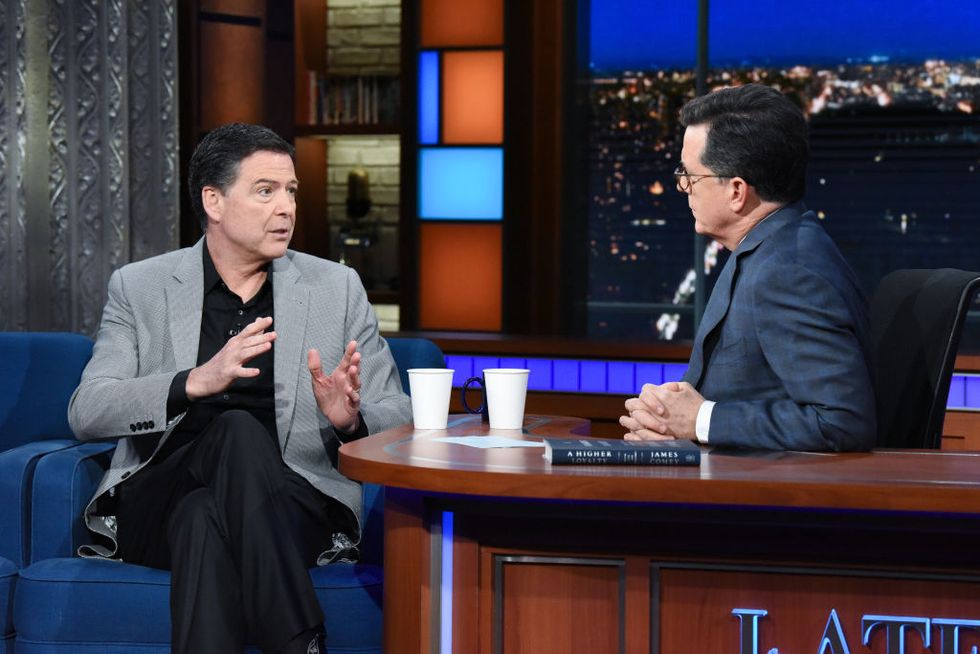 He reminded viewers that people shouldn't take the president's tweets lightly, no matter how ridiculous he may sound:

My first reaction to those kinds of tweets is a shrug — like, ‘Oh, there he goes again.’ But actually then I caught myself and I said, ‘Wait a minute. If I’m shrugging, are the rest of the country shrugging? And does that mean we’ve become numb to this?’ It’s not O.K. for the president of the United States to say a private citizen should be in jail. It’s not normal, it’s not acceptable, it’s not O.K. But it’s happened so much, there’s a danger we’re now numb to it, and the norm has been destroyed. And I feel that norm destroying in my own shrug. So we can’t allow that to happen. We have to talk about it and call it out. It’s not O.K.”

Comey's comments came after the president slammed him last week, calling him a “weak and untruthful slime ball” and a “proven LEAKER & LIAR” in posts to his Twitter followers. Trump has unraveled significantly as the release of Comey's memoir, A Higher Loyalty, which paints an unflattering picture of the president and his administration.

The president continued his attacks this morning, claiming that he did not fire Comey over the investigation into Russian interference during the 2016 presidential election. The president claimed that Comey's firing was not related to the bureau's investigation.

"Slippery James Comey, the worst FBI Director in history, was not fired because of the phony Russia investigation where, by the way, there was NO COLLUSION (except by the Dems)!” the president wrote on Twitter.

But the facts tell a different story. Trump fired Comey on May 9, an action which, many legal experts say, constitutes grounds for an investigation of Trump for possible obstruction of justice. A New York Times report the following Monday revealed that Trump asked Comey to halt the criminal investigation into Michael Flynn, his former national security advisor. (Flynn would later plead guilty to lying to federal investigators about his conversations with Sergey Kislyak, the former Russian ambassador to the United States.)

Speaking to Colbert, Comey provided a lighthearted explanation why the president just can't seem to get over him.

“He’s tweeted at me probably 50 times,” Comey said. “I’ve been gone for a year. I’m like a breakup he can’t get over. I’m out there living my best life. He wakes up in the morning and tweets at me."

Comey did admit that he'd been surprised by his firing, given that he was leading the investigation now headed by special counsel Robert Mueller.

"I actually was quite surprised, because I thought, ‘I’m leading the Russia investigation.’ Even though our relationship was becoming strained, there’s no way I’m going to get fired or whacked," he said.

"Why? Why wouldn’t you get fired?" Colbert asked.

"Because that would be a crazy thing to do. Why would you fire the F.B.I. director who is leading the Russia investigation?" Comey said.

"Because you’re leading the Russia investigation!" Colbert replied. "I don’t know if you’ve dealt with mob bosses before, but they don’t like to be investigated."

I-- and I'm not trying to that, by the way, suggest that President Trump is out breaking legs and-- you know, shaking down shopkeepers. But instead, what I'm talking about is that leadership culture constantly comes back to me when I think about my experience with the Trump administration.