Jake Tapper Just Savagely Called Out Donald Trump For His Lies About El Paso, Texas, and Issued a Blunt Warning to Americans 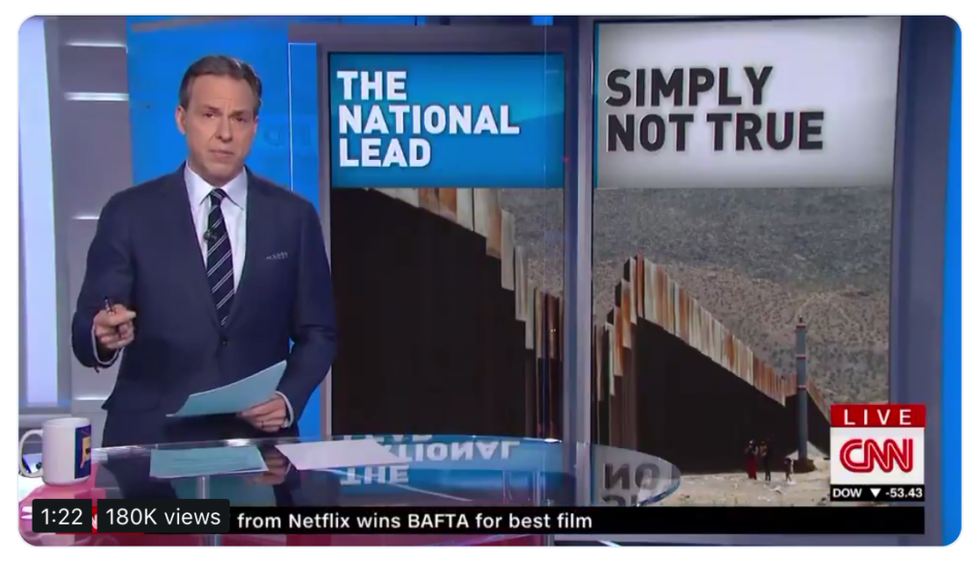 The president is lying to you to get his border wall, and CNN's Jake Tapper has the facts to prove it.

During the State of the Union address, Trump claimed:

"The border city of El Paso, Texas used to have extremely high rates of violent crime — one of the highest in the entire country, and considered one of our nation’s most dangerous cities. Now, immediately upon its building, with a powerful barrier in place, El Paso is one of the safest cities in our country. Simply put: Walls work, and walls save lives."

Except that he's completely wrong.

Tapper fact-checked the president's claims. "El Paso has never had, quote, one of the highest rates of violent crime in the entire country," said Tapper. He's right: according to FactCheck.org, "the city had the third lowest violent crime rate among 35 U.S. cities with a population over 500,000 in 2005, 2006 and 2007 – before construction of a 57-mile-long fence started in mid-2008."

Many knew that the President has been overstating the "crisis" at the southern border for far too long.

Especially when he speaks about El Paso.

El Paso has always had lower rates of crime than Dallas or Houston - cities that are not on the border.

Tapper says that "it is true that customs and border control officials would like more barriers on the US/Mexico border," but that the president's depiction of hoards of immigrants pouring in through El Paso is patently false.

Twitter had some alternate ideas about why Trump is so gung-ho about his wall. "Trump wants his wall as a monument to himself," says Twitter user B Rasmussen.

Let's call it what it is: Trump's justification for demanding his wall money is a lie.