Top Trump Official Tried to Claim That No One Blames Donald Trump for the 'Coarsening of Language' in Politics, and Jake Tapper Just Laughed in His Face 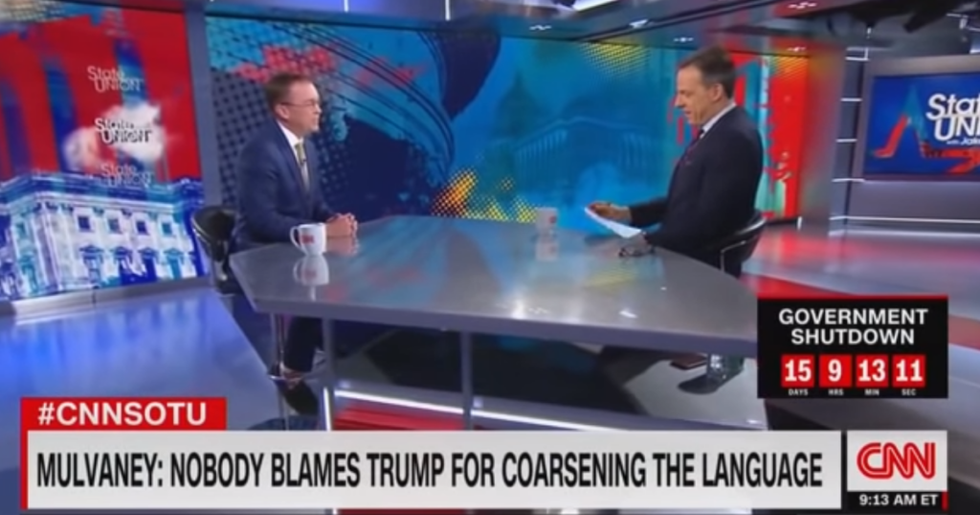 Tapper asked Mulvaney on State of the Union to remark on comments made by Congresswoman Rashida Tlaib (D-MI), who last week said Congress will "impeach the motherf*cker," referring to Trump.

Trump denounced Tlaib's colorful language as "disgraceful." But Tapper pressed Mulvaney further, as Trump is renowned for his use of expletives and disparaging remarks, particularly about women.

“President Trump obviously is not exactly known as a delicate flower when it comes to the language. He’s sworn publicly quite a bit,” Tapper said, cutting to clips to Trump swearing.

Tapper asked Mulvaney: “Does President Trump think that he’s played any role in the coarsening of our national discourse?”

Mulvaney: "No, no. I think people can be coarse as clearly this member of Congress is."

Mulvaney admitted Trump likes to curse in private, however, "I don’t think anybody blames the president for the coarsening of the language," Mulvaney said.

Tapper: “You don’t think anybody in the country blames the president?”

Mulvaney: “Well, you probably do, but I think there’s more important things than who's coarsening the language."

Anyone who has listened to Trump in earnest over the years cannot honestly say he has been a pinnacle of decorum.

@essenviews I stand with Jake Tapper on this one! 👉Jake Tapper laughs in Mulvaney’s face after he says nobody ‘blam… https://t.co/lPtsG4Ns1T
— jeff franzius (@jeff franzius) 1546825573.0

@Mediaite @jaketapper —> “I don’t think anybody blames the president for the coarsening of the (political) language… https://t.co/FJOhkZLmq8
— Kevin McCallum (@Kevin McCallum) 1546799172.0

The hypocrisy is stunning, albeit par for the course in the Trump era.

Maybe Mulvaney is speaking for himself. As for the rest of us, well...

@Mediaite Sure, the guy who called private citizens (NFL players) "sons of bitches" is definitely not to blame for… https://t.co/jbMUTJxOhe
— RodhamShimmy (@RodhamShimmy) 1546802299.0

@Mediaite Does everyone remember the things Mulvaney said about Trump before he joined the administration? Mulvaney… https://t.co/tqa9Ama6LS
— Donnie Belk (@Donnie Belk) 1546797504.0

What we are seeing and hearing are what is happening, despite what your boss says, Mick.