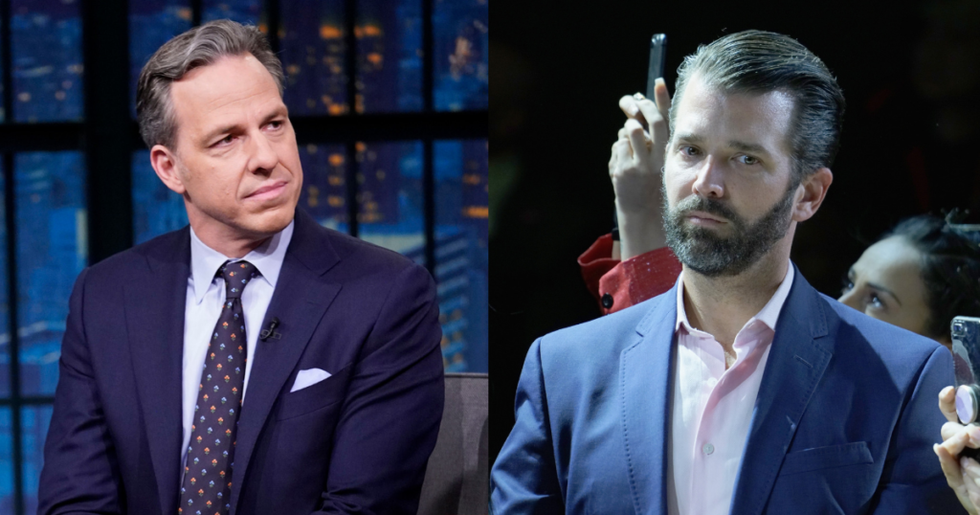 As President Donald Trump's former fixer Michael Cohen gears up to testify before Congress about the scope of the president's criminality, Donald Trump Jr. on Monday went on Fox News to try to diminish the array of offenses Special Counsel Robert Mueller has already uncovered inside his father's orbit.

First, Junior said that Trump's indicted henchmen, including Cohen, Paul Manafort, and Michael Flynn, faced “incredible pressure” and are just “regular guys" who cannot afford their legal fees (false: they are all millionaires).

Mueller, Junior suggested, “got them to slip up and say something incorrectly." This is also untrue, as all three men were charged and either convicted or pleaded guilty to intentionally lying to investigators.

“That’s all that happened,” Junior said. “There are no actual crimes.”

CNN's Jake Tapper fact-checked Junior Monday night, noting that Mueller has filed 199 criminal counts since he began his investigation into the Russian cyber attack on the 2016 election and the president's efforts to obstruct justice.

This has resulted in criminal charges against 37 people and business entities. So far, four people have been sentenced to prison, including Cohen, Flynn, Manafort, Manafort's deputy Rick Gates, and Trump campaign staffer George Papadopoulos.

Tapper had a reality check for Junior, who heads the Trump Organization - which is under investigation by the Southern District of New York.

“That’s just some of them,” Tapper said. “And, as far as we know, Mueller is not even done.”

Grab the popcorn, this is going to be quite a week.

“Disgraced felon Michael Cohen is going to prison for lying to Congress and making other false statements,” Sanders said. “Sadly, he will go before Congress this week and we can expect more of the same. It’s laughable that anyone would take a convicted liar like Cohen at his word, and pathetic to see him given yet another opportunity to spread his lies.”

Team Trump has good reason to be nervous. Cohen is expected to present a trove of evidence outlining Trump's criminal behavior, including during his time in office.

@jaketapper This going to be bad for Trump. People going to have to explain why would he hire such and incompetent idiot for a lawyer.
— Praxis (@Praxis) 1551187715.0

Cohen's legal advisor Lanny Davis said Monday that Cohen “worked very hard on this moment to not only tell the truth, but to back it up with documents.” David anticipates that Cohen, who was busted for lying to Congress, will say: “I take full responsibility, I lied in the past; now you have to decide if I’m telling the truth.”

In his scheduled testimony before the Senate and House Oversight & Intelligence Committees, Cohen is expected to deliver additional proof of Trump's racist inclinations, fraudulent business practices, and Trump's desperation to build a Trump Tower in Moscow during the 2016 campaign.

Cohen will also detail why he originally lied to Congress on Trump's behalf last year. Cohen pleaded guilty to lying to Congress last year, as well as financial crimes and campaign finance violations. Trump was implicated by Cohen as an unindicted co-conspirator, "Individual-1," for secretly paying hush money to women who had sexual relationships with Trump.

Meanwhile, the president is traveling to Vietnam to hold a second summit with North Korean dictator Kim Jong Un.