Ivanka Trump Just Tried Going After the Green New Deal With an Extremely Ironic Take, and AOC Just Called Her Out 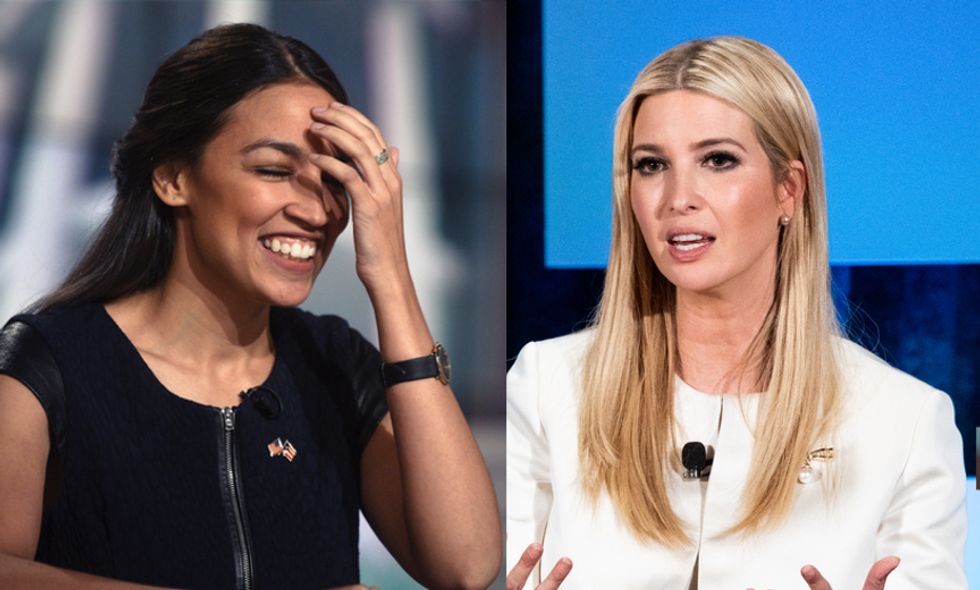 Billionaire heiress Ivanka Trump - someone who has never in her life faced unemployment - thinks Americans don't want to be "given something" like guaranteed jobs.

One of the provisions of the Green New Deal is the guarantee of "a job with a family-sustaining wages." In a segment airing on Fox News, host Steve Hilton asked Trump's thoughts on that.

Ivanka Trump bizarrely assumed that only people who were unwilling to work needed a guarantee of employment. She stood up for the American working class, about whom she doesn't have a clue.

"People want to work for what they get. So, I think that this idea of a guaranteed minimum is not something most people want."

Ivanka debuts as admin spokesperson for rugged individualism: "I don't think most Americans want to be given someth… https://t.co/N55mz5Sz2W
— Josh Marshall (@Josh Marshall) 1551191726.0

Alexandria Ocasio-Cortez spoke for us all when she responded "Imagine attacking a Jobs Guarantee by saying ‘people prefer to earn money.’"

After getting destroyed on Twitter, Trump issued a clarification:

Actually, the question she was asked was:

"You’ve got people who will see that offer from the Democrats, from the progressive Democrats, Alexandria Ocasio-Cortez: ‘Here’s the Green New Deal, here’s the guarantee of a job,’ and think, ‘yeah, that’s what I want, it’s that simple.’ What do you say to those people?”

The fact that she thought that guaranteed jobs were the same as charity shows how disconnected she is from the reality of unemployment. The fact that she has never had to work a day in her life was not lost on anyone.

Trump, who has only worked either with her father directly or used his money to start her own companies, has a history of failing to provide that sort of "upward mobility" for employees in her factories - most of whom work overseas and are severely underpaid.

"People want to work for what they get." People rarely get what they work for. I work a full-time job, with side jo… https://t.co/zLYlatcGMP
— Kristen Englenz (@Kristen Englenz) 1551209263.0

Twitter wasn't about to let the heiress off the hook for her tone-deaf comments.

Let's hope we can find a better representative for job security than a wealthy woman, married to a wealthy man, who has no idea what it means to face unemployment.