Iowa Spa That Styled Ivanka Trump Posted a Photo of Her to Facebook, Regretted It Almost Immediately

That didn't go as planned. 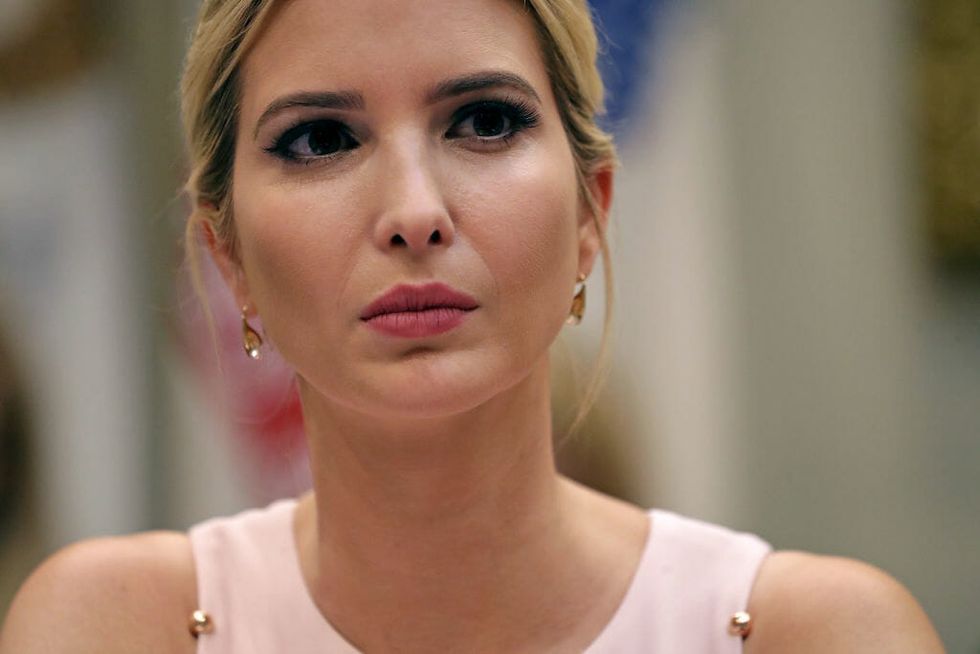 Assistant to the President and Donald Trump's daughter Ivanka Trump hosts a listening session with military spouses in the Rooselvelt Room at the White House August 2, 2017. (Chip Somodevilla/Getty Images)

A popular hair salon and spa in the East Village of Des Moines attracted heated criticism after Ivanka Trump paid them a visit.

“Our Monday kicked off with styling Ivanka Trump for her visit to Iowa! We (heart emoji) supporting women in politics,” Salon Spa W wrote in accompaniment to the photo.

The salon, which is a few blocks away from the Iowa state capitol and has served government officials including former President Barack Obama, received scores of disapproving comments.

“You respect money over women,” Facebook user Danielle Lynn commented. “Not just women, but humanity. These two featured in your photo are disgraceful.”

“This is devastating. I love Salon Spa W so much. It’s my place of refuge,” Jamie P. B. Elliot commented. “As an incredibly loyal customer, I demand an apology before I book my next appointment, and will be canceling the appointments I have.”

"Do you know how much money I spend at Salon Spa W? I get my nails and hair done there exclusively, and literally have my appointments booked till years end," another user, Emmanuel Smith, added. "THIS makes me not want to give you another penny, and makes me really REALLY angry for all your amazing LGBTQ staff whose lives these women threaten. Please take this down."

Another by the name of Ciji Leigh wrote that she loves "all the wonderful things Salon W does for our community" but referred to the post as "a business brag," adding that the "only problem with supporting women in politics is when those women support decisions that weaken and disenfranchise other women."

We believe everyone matters and deserves our indiscriminate care and kindness.

We were taken aback by the response to the image below of our Governor with Ivanka Trump who received services from our salon. We also recognize impact matters more than intent. While we are not a partisan organization we do see it as part of our mission to welcome people to Des Moines and serve everyone. We share images of our clients, some that are recognizable public figures, to showcase our work.

We are honored to serve clients from all walks of life. Our East Village location, with proximity to the State Capitol and Civic Center, provides a unique opportunity to serve musicians, actors, Broadway stars, presidents-elect (including Barack Obama), those in town for the Iowa Caucuses, lawmakers, activists, commentators, and artists of every medium –– we have shared images of many along the way.

We also serve you –– our beautiful, diverse, and passionate community. We proudly share our work and celebrate all of you because our purpose is making people look and feel beautiful.

Again, we believe everyone matters and deserves our indiscriminate care and kindness.

Many responded to the statement with praise for the salon's commitment to inclusion, although several who've signaled their support for the business voiced a belief that the backlash was the fault of "hateful liberals" opposed to Ivanka Trump and her father's legislative agenda.

@SalonSpaW I'm sorry this country has gotten so judgemental. I support your right to serve whom you please and if I… https://t.co/93I6kR4rLO
— WiccanAccolite K&S (@WiccanAccolite K&S) 1521655997.0

Others pointed out that Ivanka Trump's position as a senior adviser to the president is very much a conflict of interest.

@Newsweek I looked at @SalonSpaW twitter page where Ivanka’s visit isn’t mentioned, I wonder why? Most interesting… https://t.co/k9uCHIV3zz
— Crinklybum (@Crinklybum) 1521652458.0

It's true that many find Ivanka Trump's support for women and feminist causes rather hollow.

Last year, Ivanka Trump drew fire after she spoke on behalf of her father and the administration, supporting their decision to revoke an Obama-era rule which would have required employers to begin collecting data on gender and race to combat pay disparity.

"Ultimately, while I believe the intention was good and agree that pay transparency is important, the proposed policy would not yield the intended results..." she said at the time. She added: "We look forward to continuing to work with EEOC, [the Office of Management and Budget], Congress and all relevant stakeholders on robust policies aimed at eliminating the gender wage gap.”

Trump's stance on the subject of the numerous women who've accused her father of sexual assault is also highly contentious. The self-professed women's advocate called out Peter Alexander, a Today show reporter, last month after he asked her whether she believes her father's accusers.

“I think it’s a pretty inappropriate question to ask a daughter if she believes the accusers of her father when he’s affirmatively stated there’s no truth to it," she said at the time. “I don’t think that’ s question you would ask many other daughters. I believe my father, I know my father, so I think I have that right as a daughter to believe my father.”

Trump did not respond to her critics, who pointed out that she should be prepared to answer questions such as these within her capacity as a senior adviser to the president without falling back on her familial ties.