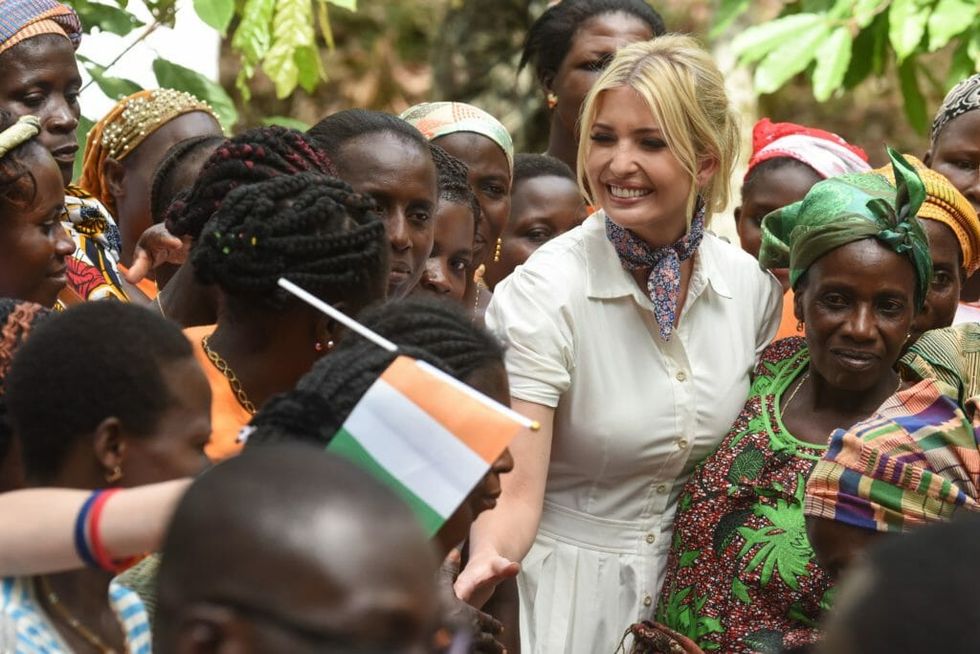 Is it possible to be accidentally self-aware? Because that's what Ivanka Trump had going on when she tweeted news coverage of her trip to the Ivory Coast with the caption "It was my privilege!"

Ivanka Trump traveled to the Ivory Coast as part of her campaign to promote the Women’s Global Development and Prosperity initiative (W-GDP). W-GDP hopes to benefit 50 million women in the developing world by 2025.

Ivanka, who is a Senior White House Advisor as well as the President's daughter, made a charity visit to Africa to discuss the initiative, and to meet with some the people she hopes to empower. You know, the ones her father referred to countries within the continent as "sh--hole countries" and who—as recently as yesterday—moved to slow immigration from several of Africa's countries.

But she danced with them, so that must make it okay.

During her trip, Ivanka attended an Ethiopian coffee ceremony, visited a cocoa farm, and tried out a loom at an Ethiopian textile factory, proving that she is, in fact, empowering. Or at least empowering-adjacent.

@catherine_lucey So she's trying to get branding in this country. Her security clearance makes sense now.
— Teresa Ganim (@Teresa Ganim) 1555282355.0

Ivanka is said to have flown commercial for the trip, but, like any empowered woman, brought along a $1,655 dress to wear to a meeting with Ethiopian president Sahle-Work Zewde.

Ivanka's father, President Donald Trump, referred to countries in Africa as "shithole countries" last year, but Ivanka has been clear that she prefers to stay out of politics. "My job as a member of this administration is not to share my viewpoint when they diverge," Ivanka said in February, adding "My role in this regard is not to—is not to be president of all women’s issues or running all women’s issues across the United States government."

That's an interesting viewpoint from someone claiming to champion women's empowerment - not to mention the President's senior advisor.

Ivanka, you've got it right: it was your privilege.