Ivanka Trump Was Asked Why She Didn't Speak Out Against Her Father's Child Separation Policy, and Her Response Was Peak Ivanka 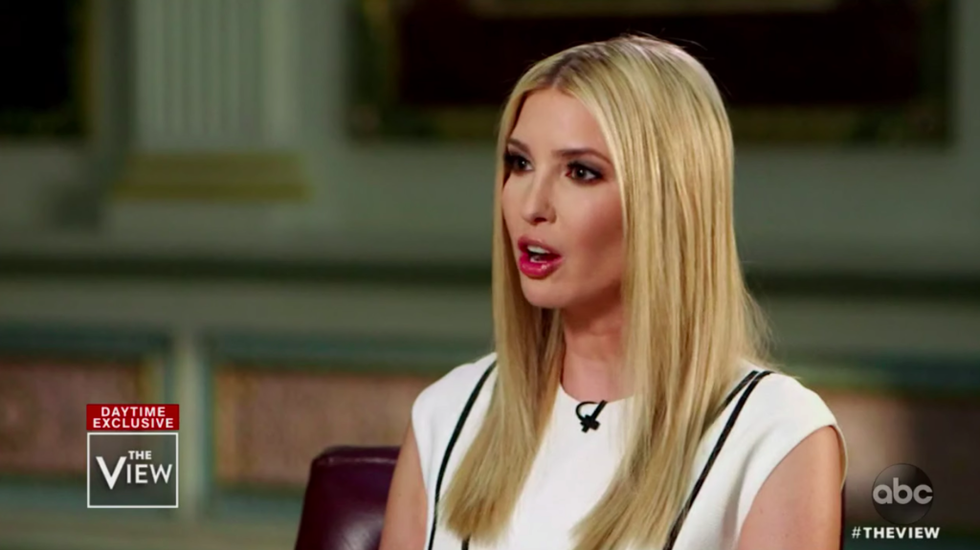 Abby Huntsman interviews Ivanka Trump on The View (The View/YouTube)

Until about five minutes into the over six minute long interview.

After lauding Ivanka Trump's accomplishments, Huntsman asked the first question that failed to portray Trump as a victim or a heroine. After outlining Trump's work slated to begin soon on the empowerment of women—a project that reportedly has been in the planning stage since Donald Trump's election—The View co-host asked:

"You know you’re going to have people watching that say, this sounds great, everyone can get behind women empowerment, but how does Ivanka Trump reconcile pushing an initiative that empowers women with policies from the White House like separation of families that was such an emotional thing for our country to go through?”

“We didn’t hear from you, publicly, during that time. What do you say to those folks who are struggling with that?"

Trump's response was typical of her ongoing desire to have it both ways -- an "advisory" role in the White House that doesn't do much advising:

"My job as a member of this administration is not to share my viewpoint when they diverge."

People had their own assessments of Ivanka Trump's White House role.

@IvankaTrump You do nothing except be a terrible role model to all females!! You haven’t done one thing to improve… https://t.co/G7BBwAqqUH
— Rose White (@Rose White) 1549663204.0

The President and his daughter also announced their new women's empowerment program, that took over two years to launch, on social media Friday.

#WGDP is the United States of America’s commitment to economically empowering women and, in so doing, achieving gre… https://t.co/QqMfABcBLv
— Ivanka Trump (@Ivanka Trump) 1549583807.0

But they got a less than supportive response.

Some accused the timing of the long awaited project from Ivanka Trump of conveniently coinciding with the President needing to distract voters.

@realDonaldTrump Ivanka had been MIA for a year now . Her business in China must be slowing down .
— bella sanchez (@bella sanchez) 1549614810.0

@realDonaldTrump I'm sorry, but the only thing that comes to mind when watching the video is Nepotism
— constitutionem (@constitutionem) 1549610334.0

@realDonaldTrump Why is that handbag merchant even speaking to us? She is simply the bratty daughter of a corrupt… https://t.co/XiKnrP3c4q
— Gringo de Guamani (@Gringo de Guamani) 1549623614.0

Ivanka Trump's official title is White House presidential adviser. As with the word complicit, which Ivanka Trump famously said she did not understand the meaning of...

...there seems to be a disconnect on the meaning of adviser.

According to Merriam-Webster, adviser means "a person who gives advice in a particular field." But it seems Ivanka Trump thinks it means to publicly agree with everything the person you're advising says and does.