Republican Senator Just Went Off on Donald Trump Over His Criticism of John McCain, and He Has No F*cks Left to Give 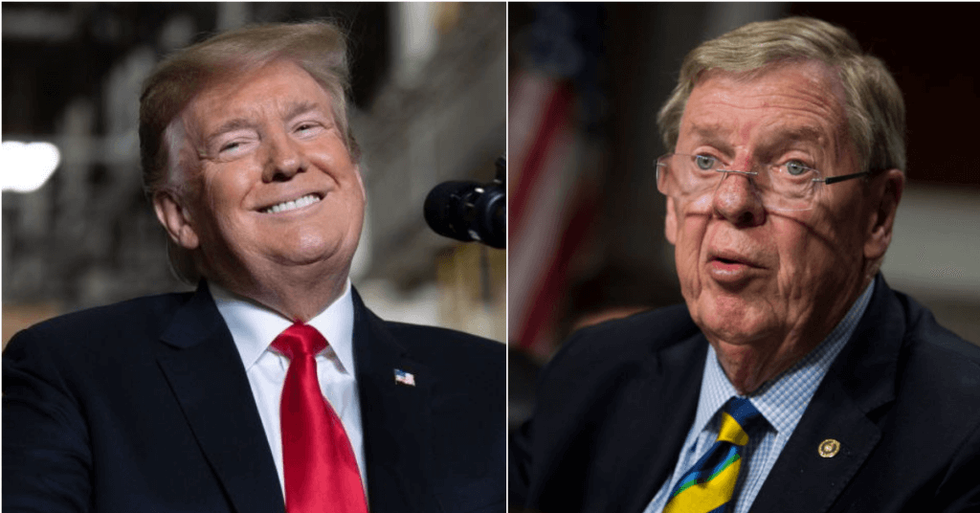 After the death of Senator John McCain of Arizona, many expected President Donald Trump to stop his attacks against the one-time Republican presidential candidate, US Navy veteran and Vietnam War POW. However the President has done anything but.

Despite McCain's death in August of 2018, in March of 2019 Trump still tweets attacks aimed at McCain. But one Southern GOP Senator has had enough.

It is not McCain's close friend Senator Lindsey Graham of South Carolina however. It is Georgia's senior Senator Johnny Isakson who plans to publicly take the President to task for his recent tweets and remarks about McCain.

Back in August Isakson promised to do just that in a speech on the Senate floor where he declared:

"We need to remember that. So I would say to the president or anybody in the world, it is time to pause and say that this was a great man who gave everything for us. We owe him nothing less than the respect that he earned, and that is what I intend to give John in return for what he gave me."

Now in an exclusive interview with conservative publication The Bulwark, Isakson stated:

"I want to do what I said that day on the floor of the Senate. I just want to lay it on the line, that the country deserves better, the McCain family deserves better, I don’t care if he’s President of United States, owns all the real estate in New York, or is building the greatest immigration system in the world. Nothing is more important than the integrity of the country and those who fought and risked their lives for all of us."

"America deserves better, the people deserve better, and nobody—regardless of their position—is above common decency and respect for people that risk their life for your life. When the President is saying that he doesn’t respect John McCain and he’s never going to respect John McCain and all these kids are out there listening to the president of the United States talk that way about the most decorated Senator in history who is dead it just sets the worst tone possible."

Later on Wednesday in an interview on Georgia public radio, Isakson said:

"It's deplorable what he said. There aren’t Democratic casualties or Republican casualties on the battlefield."

Isakson referred to remarks made by Trump in the Oval Office where the President said in reference to McCain's vote on the Affordable Healthcare Act repeal:

"I think that’s a disgrace, plus there are other things. I was never a fan of John McCain, and I never will be."

Trump's remarks were the last straw for Isakson and others. And while some addressed their grievances directly toward the President, others asked why McCain's friends in the GOP failed to come to his defense.

In the words of The Bulwark, of particular note was Senator Lindsey Graham's relative silence. They stated of Graham:

"He’s now a Trump ally who tries to let as little daylight come between himself and the president as possible."

"Amazingly, few of the late senators’ Republican colleagues were willing to defend their friend’s honor. Meghan McCain was left on her own to stand up to the president’s abhorrent behavior."

Undeterred, Trump again attacked McCain at a White House event on Wednesday at a tank manufacturing facility. The President complained that he was not properly thanked for allowing McCain's funeral.

"I endorsed him at his request and I gave him the kind of funeral he wanted, which as president I had to approve."

"I don’t care about this. I didn’t get a thank you. That’s okay. We sent him on the way. But I wasn’t a fan of John McCain."

"It will be deplorable seven months from now if he says it again, and I will continue to speak out."