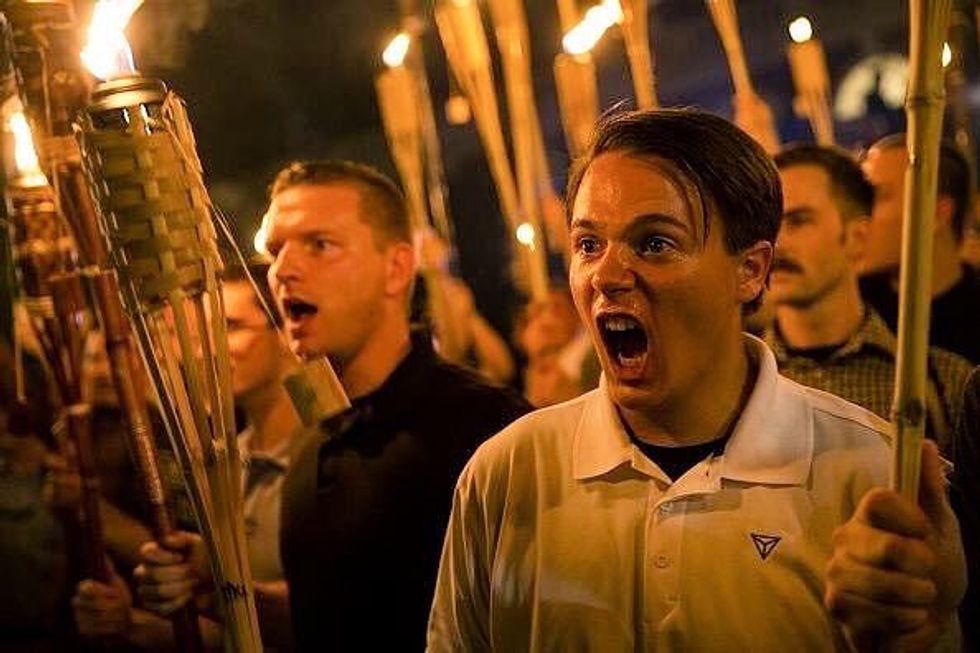 A Twitter account called Yes, You're Racist has been publicly outing white supremacists who attended "Unite the Right" demonstrations following a decision by the city of Charlottesville to remove a statue of Confederate general Robert E. Lee. The user of the account asked followers to send the names and social media profiles of anyone they recognized at the protests.

If you recognize any of the Nazis marching in #Charlottesville, send me their names/profiles and I'll make them fam… https://t.co/wI8rvhqExb
— Yes, You're Racist (@Yes, You're Racist) 1502556186.0

Among them: Cole White, a cook at Top Dog, a hot dog chain in Berkeley, California.

A spokesman for the company confirmed that White had been fired. At the Durant Avenue location of Top Dog, the business posted a flyer in the window announcing that White was no longer in the company's employ.

“I came to this march for the message that white European culture has a right to be here just like every other culture," Cvjetanovic said in an interview with KTVN.  “It is not perfect; there are flaws to it, of course. However I do believe that the replacement of the statue will be the slow replacement of white heritage within the United States and the people who fought and defended and built their homeland. Robert E Lee is a great example of that. He wasn’t a perfect man, but I want to honor and respect what he stood for during his time.”

Cvjetanovic says he's received a considerable amount of backlash––including angry Facebook messages––since he was publicly identified. “I did not expect the photo to be shared as much as it was. I understand the photo has a very negative connotation. But I hope that the people sharing the photo are willing to listen that I’m not the angry racist they see in that photo," he continued. "As a white nationalist, I care for all people. We all deserve a future for our children and for our culture. White nationalists aren’t all hateful; we just want to preserve what we have.”

In a statement, Marc Johnson, the president of The University of Nevada, where Cvjetanovic is a student, acknowledged that one of the protesters was a student, but did not mention Cvjetanovic by name.

"Racism and white supremacist movements have a corrosive effect on our society. These movements do not represent our values as a university," the statement reads in part. We denounce any movement that targets individuals due to the color of their skin, their religious beliefs, political beliefs, sexual orientation, ability/disability, or whether they were born in our country."

A Change.org petition calls for Cvjetanovic's firing and expulsion from the university.

"I do not think they have the right to expell [sic] me from a public university," Cvjetanovic says. I went to a legal political rally to express my freedom of speech. I committed no acts of violence, and dispersed when told that the rally had become illegal. Therefore I did nothing illegal at that rally. I am allowed to express my political beliefs and if UNR does expel me, then it is a clear violation of my first amendment."

The Southern Poverty Law Center described the "Unite the Right" rally as "the largest hate-gathering of its kind in decades in the United States," attracting "a broad spectrum of far-right extremist groups – from immigration foes to anti-Semitic bigots, neo-Confederates, Proud Boys, Patriot and militia types, outlaw bikers, swastika-wearing neo-Nazis, white nationalists and Ku Klux Klan members – all of whom seem emboldened by the Trump presidency."

Over the weekend, authorities identified 32-year-old Heather Heyer, a paralegal who lived in Charlottesville, as the woman who was killed after she was struck by a Dodge Challenger driven by James Alex Fields, who had traveled to the city from Ohio to protest at the "Unite the Right" rally with fellow white nationalists.

Heyer "always had a very strong sense of right and wrong, she always, even as a child, was very caught up in what she believed to be fair,” says her mother, Susan Bro. “Somehow I almost feel that this is what she was born to be, is a focal point for change. I’m proud that what she was doing was peaceful, she wasn’t there fighting with people.”

Web hosting company GoDaddy said on Sunday it had given The Daily Stormer––which calls itself"The World's Most Genocidal Republican Website"––24 hours to move its domain to another provider after the extremist web site published an article slamming Heyer for her physical appearance and accusing her of espousing "anti-white male" views.

In a statement, the City of Charlottesville condemned Heyer's death as a "senseless act of violence" which took place as Heyer was "exercising her peaceful first amendment right to free speech." The city government also sent its condolences to the families of Lieutenant H. Jay Cullen and Trooper Pilot Berke M. M. Bates, who died in a helicopter crash near Charlottesville.

"The Bell 407 helicopter was assisting public safety resources with the ongoing situation in Charlottesville," said Susan Rowland, Virginia State Police Public Relations Coordinator, who confirmed that the two men died at the scene after the helicopter crashed into a wooded area near a home just before 5 PM.