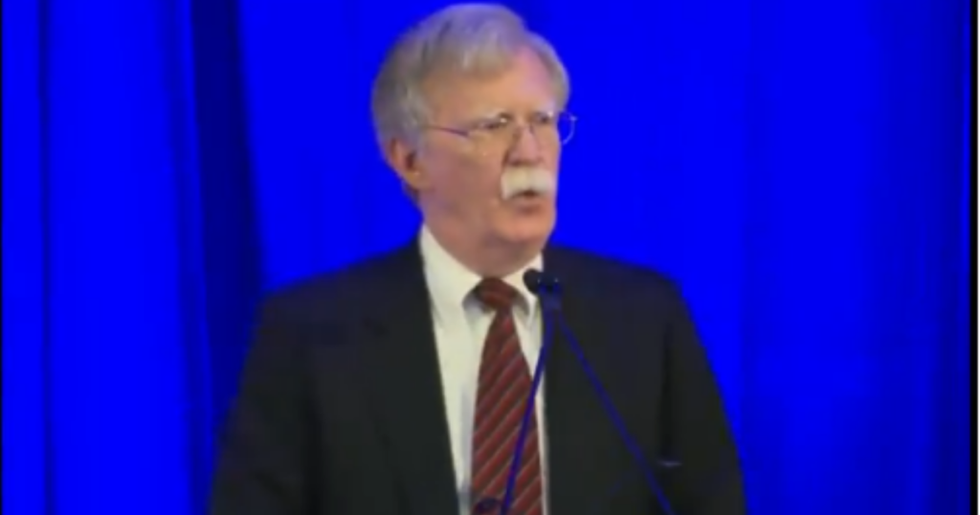 The International Criminal Court announced on Tuesday that it would "continue to do its work undeterred" after National Security Advisor John Bolton threatened retaliation if the court investigated alleged American war crimes in Afghanistan.

"The ICC, as a court of law, will continue to do its work undeterred, in accordance with those principles and the overarching idea of the rule of law," the ICC said.

The court has a "reasonable basis to believe" war crimes were committed in Afghanistan during the United States' longest war, said prosecutor Fatou Bensouda.

Reuters reported on Tuesday that "the ICC that all sides in the conflict would be examined, including members of the U.S. armed forces and Central Intelligence Agency."

On Monday, Bolton said the ICC was "illegitimate" and "for all intents and purposes, the ICC is already dead to us." He told the conservative Federalist Society that he sees the court as

"We will provide no assistance to the ICC," John Bolton said of the International Criminal Court, which is preparin… https://t.co/rOlPm54ugs
— POLITICO (@POLITICO) 1536599095.0

The United States under President George W. Bush, along with Sudan, Syria, and Russia, refused to ratify the 2002 Rome Treaty establishing The Hague-based ICC, which "has the power to prosecute individuals for war crimes, genocide, and crimes against humanity," The Independent wrote on Monday.

Bolton added that he and President Donald Trumps administration believe the "central aim of the ICC’s most vigorous supporters was to constrain the U.S.," describing the international body designed to protect human rights as "freewheeling global organization governing over individuals without their consent."

Bolton said that reports of abuses of detainees by American occupying forces were “utterly unfounded" and that the United States "will provide no cooperation to the ICC."

Bolton tried to spin American refusal to cooperate with the ICC as a defense of "patriots" merely doing their jobs, telling the Federalist Society:

Literally any day now, the ICC may announce the start of a formal investigation against these American patriots, who voluntarily singed on to go into harm's way to protect our nation, our homes, and our families in the wake of the 9-11 attacks.

Bolton followed up with a message from the president.

"The United States will use any means necessary to protect our citizens and our allies from unjust prosection from this illegitimate court," Bolton warned. We will not cooperate with the ICC, we will provide no assistance to the ICC, and we certainly will not join the ICC. We will let the ICC die on its own. After all, for all intents and purposes, the ICC is already dead to us."

Bolton also said the United States could retaliate against any ICC investigation with sanctions against ICC judges.

Concerned citizens on social media struggled to understand what the administration's problem with the ICC is, and why the United States is placing itself above the law.

It's the ICC's job to stand up to "tyrannical regimes."

@Reuters Good. The international community SHOULD be standing up to tyrannical regimes.
— RoastPorkins (@RoastPorkins) 1536672645.0

@Reuters For the international court to have any credibility it has to stand up to bullies like Bolton.
— Peter Walker (@Peter Walker) 1536671816.0

What are they so afraid of?