Perhaps they should talk to their boss. 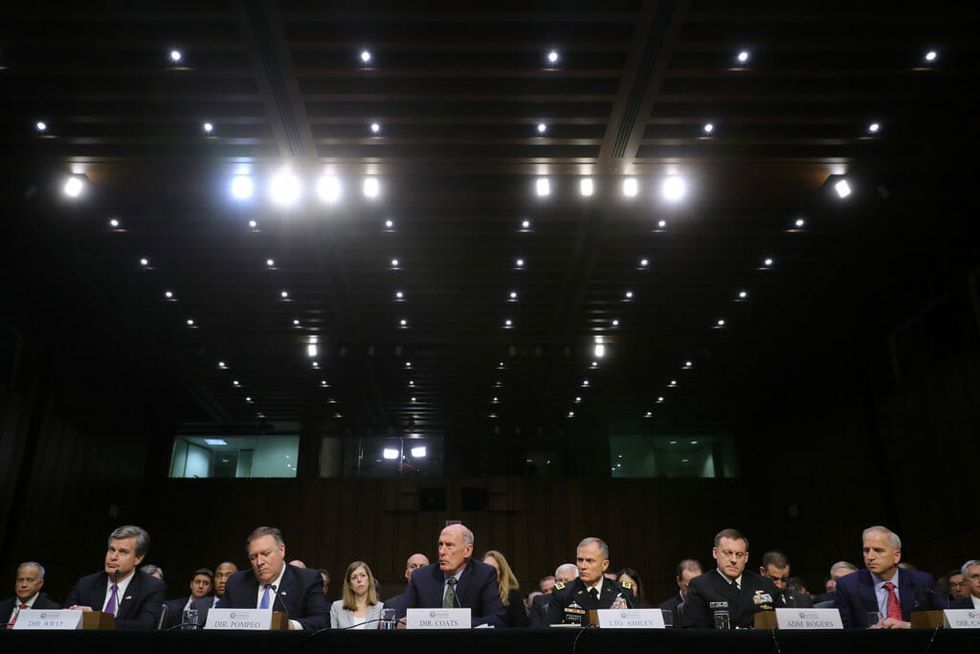 In a stunning admission and rebuke of President Donald Trump, the six chiefs of the United States intelligence agencies revealed that not only did Russia interfere with the 2016 presidential election, but that it's only going to get worse unless some sort of "national outcry" occurs.

"That this is going to happen, and the resilience needed for us to stand up and say we're not going to allow some Russian to tell us how to vote, how to run our country," Director of National Intelligence Dan Coats said. "I think there needs to be a national cry for that." Coats also said that "we need to inform the American public that this is real," further isolating the president, who takes Vladmir Putin's word that Russia did not meddle in the 2016 election.

"We have seen Russian activity and intentions to have an impact on the next election cycle here," CIA Director Mike Pompeo said. Russian meddling is "not going to change or stop, Pompeo said. "We have a significant effort, to do our best to push back against this treat, and it's not just the Russian threat – it's Iranians and Chinese – it's a big, broad effort."

"The President inconceivably continues to deny the threat posed by Russia," Senator Mark Warner (D-VA) said in his opening statement. "He didn't increase sanctions on Russia when he had a chance to do so. He hasn't even tweeted a single concern. This threat demands a whole-of-government response, and that needs to start with leadership at the top."

The admissions by the leaders of the intelligence community also indicate that Trump is lying to the American people about Russia and its ongoing election interference. In fact, according to Secretary of State Rex Tillerson, not much is being done to protect our democracy against Russian attacks.

The Trump administration is also reneging on its promise to impose sanctions on Russia as punishment for its election interference.

The public is concerned, and rightly so. What is our contingency plan in the event of a fraudulent election?

The fact that our very democracy is at risk is terrifying enough, but making matters worse is the indifference being shown by Trump and the Republican Party.

This is actually frightening that our intelligence heads are publicly telling us Russia is seeking to interfere wit… https://t.co/lZmsaUrFst
— Amy Siskind 🏳️‍🌈 (@Amy Siskind 🏳️‍🌈) 1518546459.0

"It's remarkable that you've got all the leaders of the intelligence community, yet you still don't have the president of the United States acknowledging the level of this threat," Warner said.