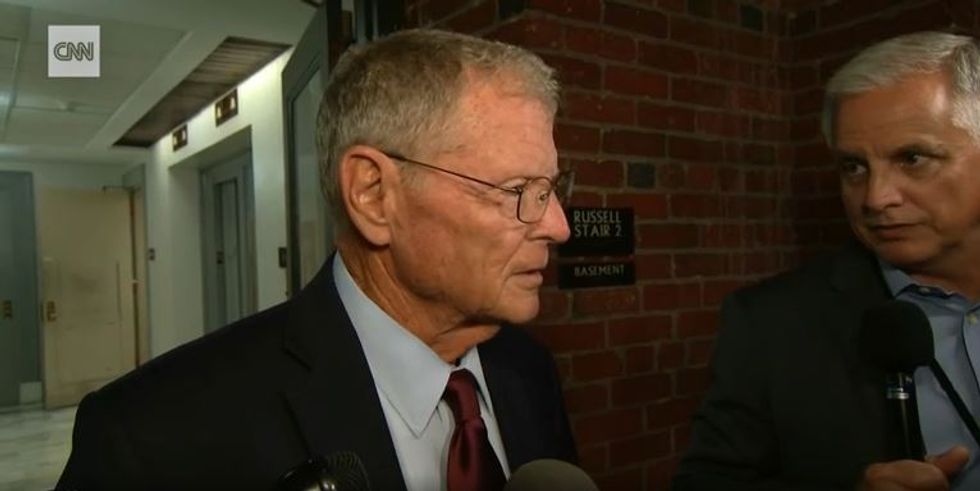 Senator James Inhofe (R-OK) is facing backlash after claiming to reporters on Monday that the late Senator John McCain (AZ) is partially responsible for President Donald Trump's reaction to his death.

The president faced public outcry for his refusal to remark on the character of McCain, with whom he often clashed, as well as for his unwillingness to release a statement calling McCain a hero and for returning flags to full staff after briefly lowering them to half-staff over the weekend.

Many saw Trump's actions as petty and vindictive. Trump later relented, but not before Senator Inhofe attempted to defend him:

Well, you know, frankly, I think that John McCain is partially to blame for that because he is very outspoken. He disagreed with the President in certain areas and wasn't too courteous about it.

When asked what he thought about Trump refusing to call McCain a hero, Inhofe--who has repeatedly used the term to describe McCain--said, "Oh, let them have their thing, I have no opinions about that. He was my hero."

The statements came after Inhofe praised McCain in the Senate.

You always remember the people who help you when no one else would. John McCain was a fighter who was deeply loyal… https://t.co/fXCQwi2K3N
— Jim Inhofe (@Jim Inhofe) 1535414827.0

Many social media users were outraged at his statement that McCain was partially to blame.

And that Inhofe appeared to contradict his statements in the Senate.

Though Inhofe said McCain "wasn't too courteous" about his disagreements with Trump, the same could be said--possibly more accurately--about Trump.

McCain was a prisoner of war for nearly six years. He was offered early release, but since the code of conduct's policy was that prisoners of war be released in the order that they were captured, McCain chose to remain behind, despite continuous imprisonment and torture.

While many would agree that these actions made McCain a hero, Trump has refused to acknowledge this for over a decade.

He made the claim in 1999 that McCain wasn't a hero because he was captured:

And again in 2015, during his presidential campaign:

Trump received a total of five draft deferments for the same war in which McCain fought. Yet, McCain was measured in his response.

McCain accused Trump of "firing up the crazies" by espousing belligerent anti-immigrant rhetoric during the 2016 campaign. Trump fired back on Twitter, calling McCain a dummy.

The thousands of people that showed up for me in Phoenix were amazing Americans. @SenJohnMcCain called them "crazies"--must apologize!
— Donald J. Trump (@Donald J. Trump) 1437079096.0

.@SenJohnMcCain should be defeated in the primaries. Graduated last in his class at Annapolis--dummy!
— Donald J. Trump (@Donald J. Trump) 1437079196.0

In the court of public opinion, however, McCain appears to reign supreme.

pres trump - you are commander in chief by law, duty bound to honor sen mccain ignoring his death is a disgrace
— Tom Brokaw (@Tom Brokaw) 1535381404.0

Even among those who usually side with Trump.

I actually scolded Donald Trump to his face in an interview after he denigrated John McCain’s war service during th… https://t.co/0UlG5qadF6
— Bill O'Reilly (@Bill O'Reilly) 1535386062.0

Senator Inhofe's statements in defense of Trump almost certainly won't bode well for his reputation. Trump, in his attempts to besmirch John McCain's character to the American people, seems to have only succeeded in revealing his own.