Laura Ingraham Tried to Go After Nicole Wallace for Slamming Trump During George H. W. Bush Coverage, and It Did Not End Well 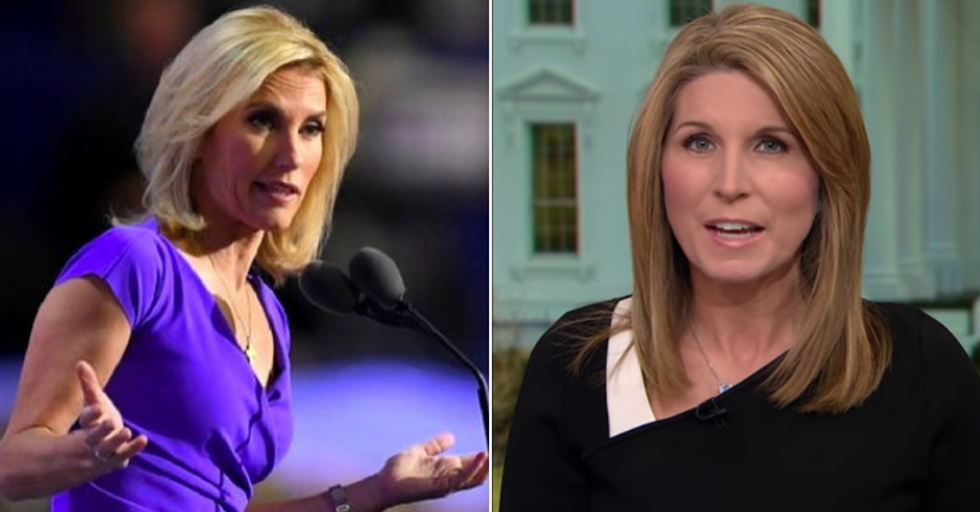 During MSNBC commentary on the procession of the casket of former President George H.W. Bush to the Capitol Building, Republican pundit Nicole Wallace stated:

"I think what everyone’s getting at is that under Donald Trump, the office of the presidency has been debased in a way that is unimaginable for people who served, every past president…"

"I think what’s lost in this moment is our reverence and our dependence and the way we need and rely upon the elegance and the traditions of the presidency."

But Fox News host Laura Ingraham called foul on Wallace's assessment. In a since deleted series of tweets, Ingraham quoted Wallace and referred to her commentary as "sniping":

"As the #Bush41 processional was making its way to the Capitol, @MSNBC's Nicole Wallace sniped: 'Under Donald Trump the office of the presidency has been debased in ways that are unimaginable to those who have served every past president….' — Laura Ingraham (@IngrahamAngle) December 3, 2018"

But Wallace responded to the dig from Ingraham.

At the very same moment @IngrahamAngle was watching @MSNBC and sniping at me. https://t.co/izLFYTXeX0
— Nicolle Wallace (@Nicolle Wallace) 1543880125.0

If describing reality is sniping then ok .. but I’m not sure where you think this is going except REALLY badly.… https://t.co/tgIpTPwpyx
— Mika Brzezinski (@Mika Brzezinski) 1543885688.0

Ingraham—who lost sponsors after an attack against Parkland mass shooting survivor David Hogg—deleted the original tweet naming Wallace and replaced it with a more generic statement. Ingraham also made certain to tag President Donald Trump in her final version.

While Ingraham's fans supported her message, others felt as Brzezinski did about statements of fact being apolitical.

@IngrahamAngle @realDonaldTrump I don't know why you bother to tweet Yesterday your swipe at Nicole Wallace had 2 a… https://t.co/C4i6QYQqyY
— Tina Carter (@Tina Carter) 1543926456.0

While others brought up Ingraham's own reputation and conduct.

@IngrahamAngle @realDonaldTrump Like the one you launched against Nicole?
— Pat Martinez (@Pat Martinez) 1543887999.0

The former shock jock famously sent a tape recorder to a gay student support group at Dartmouth College when she was a student there.

Ingraham then outed the students in The Dartmouth Review and sent the tapes to their families to further out them.

The host of the Fox News program The Ingraham Angle also faced accusations of racism more than once for her commentary. Getting accolades from former Ku Klux Klan leader David Duke did not improve that perception.

Aside from Ingraham's own Twitter feed, little love is lost for the conservative pundit in the Twittersphere.

@IngrahamAngle @MSNBC Yes #NicoleWallace spoke the truth #Trump has debased the presidency and every morning I pray… https://t.co/3yZkTQE0nx
— FRS (@FRS) 1543922505.0