Tucker Carlson Went on a Racist Rant About Rep. Ilhan Omar, and Omar Just Perfectly Shut Him Down 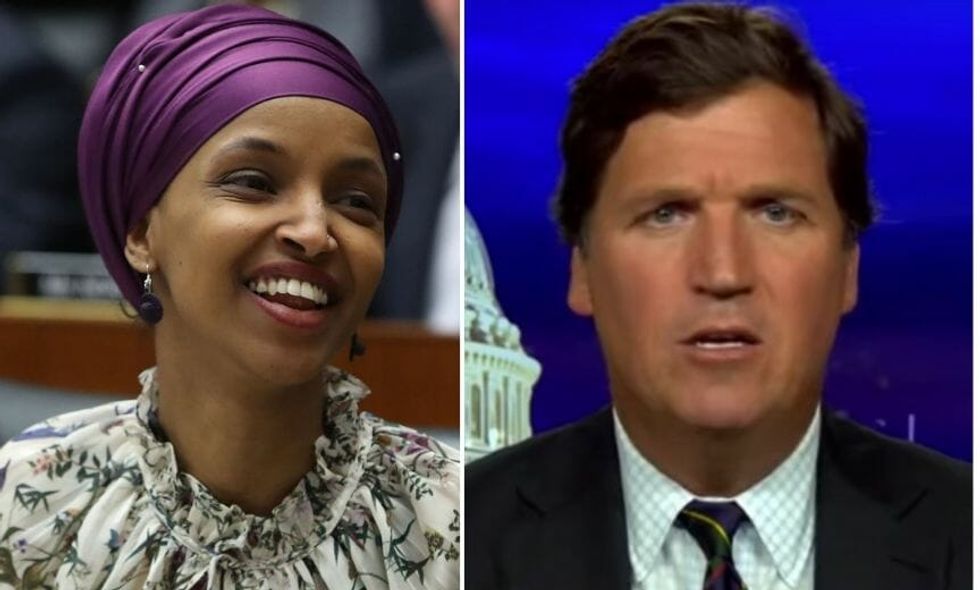 Far-right Fox News host Tucker Carlson is no stranger to bigoted rants. He's lost advertisers and spurred boycotts for unleashing racist rhetoric both on and off the air.

But Carlson's prejudice took aim at a specific member of Congress during his Tuesday night show: Congresswoman Ilhan Omar (D-MN).

Omar immigrated to the United States from Somalia as a child before becoming a state congresswoman and eventually a United States representative.

In a rant painting Omar's critiques of the United States as a hatred toward the country, Carlson warned viewers that Omar, a democratically elected public official, was a danger in Congress and an example of immigration in the United States going too far.

Watch the unsettling tirade below:

“Virtually every public statement she makes accuses Americans of bigotry and racism,” Carlson said. “She has undisguised contempt for the United States and for its people. That should worry you, and not just because Omar is now a sitting member of Congress.”

"Ilhan Omar is living proof that the way we practice immigration has become dangerous to this country. A system designed to strengthen America is instead undermining it. Some of the very people we try hardest to help have come to hate us passionately.”

Omar, who routinely receives death threats due to right wing rhetoric like Carlson's, took the rant in stride, undoing Carlson in a single tweet.

Omar laughed at Carlson (via emoji) and assured that him portraying her as malicious would do nothing to diminish her resolve to "make our union more perfect."

@IlhanMN He's afraid of you. Stand proud and do what's right. You'll be there for a long time even after the idiot is gone.
— Progressives (@Progressives) 1562762448.0

@IlhanMN Sending love and respect to you!!! You are classy in a situation that deserves rebuke. #OneWorld #OnePeople #StopTheHate
— Benz mom (@Benz mom) 1562759955.0