Rep. Ilhan Omar Had the Perfect Response After Donald Trump Called on Her to Step Down in the Wake of Her Controversial Tweets 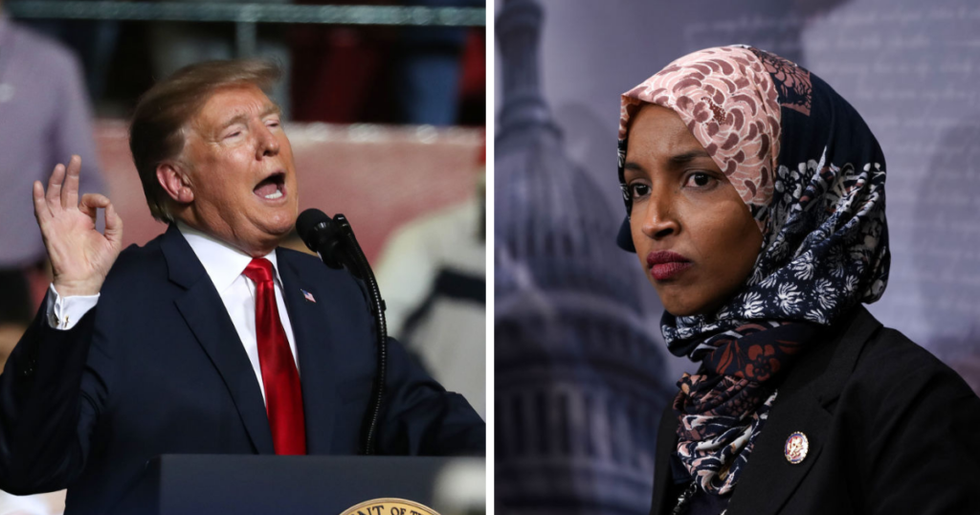 While the PAC is certainly influential, many felt that accusing it of using money to control Washington fed into the antisemitic conspiracy theory that a network of Jewish people use their money to sway the world in their favor. Omar soon heartily apologized.

However, it wasn't enough for President Donald Trump, who called on her to resign and dismissed her apology as lame.

"Anti-Semitism has no place in the United States Congress. And I think she should either resign from Congress or she should certainly resign from the House Foreign Affairs Committee.”

Omar soon fired back, and she didn't mince words.

"You have trafficked in hate your whole life––against Jews, Muslims, Indigenous, immigrants, black people and more. I learned from people impacted by my words. When will you?"

Many agreed and came to the Congresswoman's defense.

@IlhanMN @realDonaldTrump Good for you. Trump is the last person who should be calling out anyone about hatred of any group.
— debdlund (@debdlund) 1550067243.0

@IlhanMN @realDonaldTrump Donald, you should resign. I think Ilhan speaks for many people who have gone without rep… https://t.co/ApE6109Epf
— Kathleen (@Kathleen) 1550068156.0

@IlhanMN @realDonaldTrump I still can't see why you felt the need to apologize. Criticising the Israeli government… https://t.co/LwGlcHqSIa
— Pablito (@Pablito) 1550067034.0

@IlhanMN @realDonaldTrump I forgive you and applaud how quickly you are acting for betterment and unification. That was easy.
— Brian Neises (@Brian Neises) 1550067282.0

The controversy surrounding Omar's comments began after she implied that money spent by the American Israel Public Affairs Committee (AIPAC), a lobbyist group, was responsible for many pro-Israel positions among politicians in Congress.

After legislators on both sides of the aisle condemned her remark, Omar issued an apology.

Trump’s history of racial animus is well documented. A few examples are listed below.

Land reform––more specifically “land restitution”––was one of the promises made by the African National Congress when it came to power in South Africa in 1994, in response to the Native Lands Act of 1913. which “prohibited the establishment of new farming operations, sharecropping or cash rentals by blacks outside of the reserves” on which they were forced to live. White nationalists have claimed that the movement has sparked a “genocide” against white farmers who’ve opposed redistributing lands.

The president denied that he or Sessions had anything to do with the policy, even as he admitted that the policy was a negotiating tool to get Democrats to cave to his demands (which include tougher border security as well as a wall erected along the nation’s southern border).

The president's racially charged statements have prompted commentators such as CNN's Don Lemon, whom Trump once derided as "the dumbest man on television," to observe that he “divides by race and tries to conquer decency by smearing and besmirching the truth.”