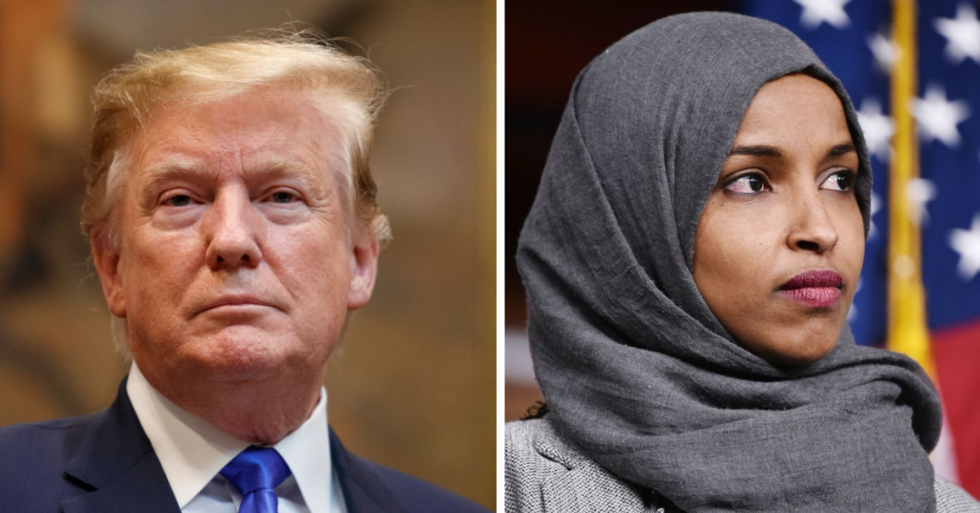 Omar is one of Trump's favorite targets for Twitter tirades. He's previously tweeted that she "hate[s] Israel and all Jewish people," falsely claimed that she dismissed the September 11 attacks, and told her to "go back" to her country—prompting his supporters to chant "send her back" at a campaign rally shortly after.

On Wednesday morning, Trump retweeted a since-deleted video of Trump sycophant Terrence Williams which featured Omar dancing at a gathering. Williams and other Trump supporters falsely claimed that Ilhan Omar had been "partying on 9/11." In reality, the video was taken at a party on September 13.

Watch the original below:

Though Williams's tweet has been deleted, Trump's comment attached to his retweet of the video still remains.

Omar said of Twitter's response to the lies:

“They have a responsibility and they set community standards and clearly the president has shown many-a-times that he has violated their community standards. I don't even know why his account is not fully suspended — why he's not deplatformed.”

Omar echoed her earlier calls for Twitter to hold the President accountable.

This is from a CBC event we hosted this weekend to celebrate black women in Congress. The President of the United… https://t.co/FK5YRUm1LU
— Ilhan Omar (@Ilhan Omar) 1568816514.0

Trump's attacks echo an oft-touted lie he used to tell: that thousands of Muslims in New Jersey celebrated the September 11 attacks as the towers fell. This was repeatedly debunked, yet Trump never acknowledged it to be a falsehood.

Williams's video may be deleted, but the damage and danger brought by Trump disseminating was already done.

@realDonaldTrump My view: #Omar is an anti-American, non-assimilating Sharia Adherent who is involved in Settlement Jihad.
— John Betts (@John Betts) 1568810606.0

Despite the Islamophobic hatred, others leapt to correct the record.

It comes as no surprise that Donald Trump's racism and xenophobia knows no bounds. I look forward to continue worki… https://t.co/fZ2TBIAHV7
— Bernie Sanders (@Bernie Sanders) 1568818082.0