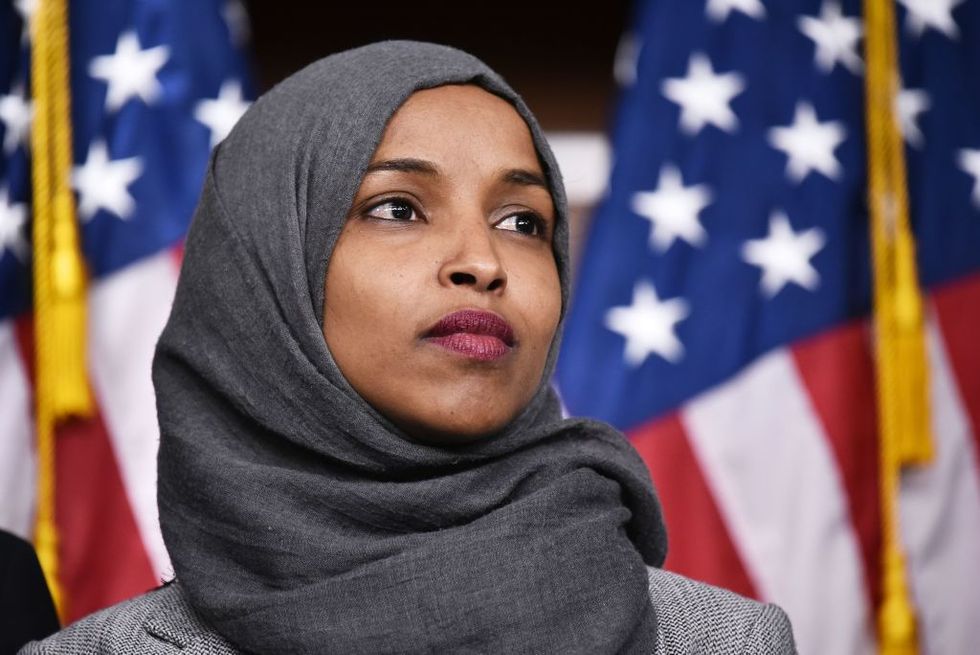 Representative-elect Ilhan Omar, D-MN, attends a press conference in the House Visitors Center at the US Capitol in Washington, DC on November 30, 2018. (Photo by MANDEL NGAN/AFP/Getty Images)

Congresswoman Ilhan Omar (D-MN) is one of the first Muslim women elected to Congress in American history.

While that's an admirable achievement, it's also revealed the bigotry of some of her fellow Americans. Since her inauguration, the Somalian-American immigrant has been the subject to conspiracy theories, chants of "send her back" at Presidential rallies, and threats against her life.

Omar posted a picture of one of the threats on Twitter, demonstrating just how harmful and hateful the President-approved attacks on her character have become.

Omar was replying to an observation that her security detail was standing guard behind her while she delivered a speech in Minneapolis on immigration.

"Ilhan Omar!! You will not be going back to Washington, your life will end before your 'Vacation' ends. That being said, you won't die alone, if that matters. Quite likely it will be at the Minnesota State Fair, that's where the ,you won't die alone, comes in. However we have a very capable person with a very big "Gun". They say we can't get the Somali Stink out of the clean Minnesota air, but we're going to enjoy the adventure."

It offered a glimpse into the daily obstacles of one of America's most targeted politicians.

@IlhanMN I am so sorry anyone ever has to deal with unfounded, fearful hate. As a person of great privilege I want… https://t.co/F0frxMZEJ7
— Richard LaCelle (@Richard LaCelle) 1567052964.0

Sadly, too many of the comments also demonstrated the hostility that motivates despicable threats like these.

No additional information has been released on the source of the letter.