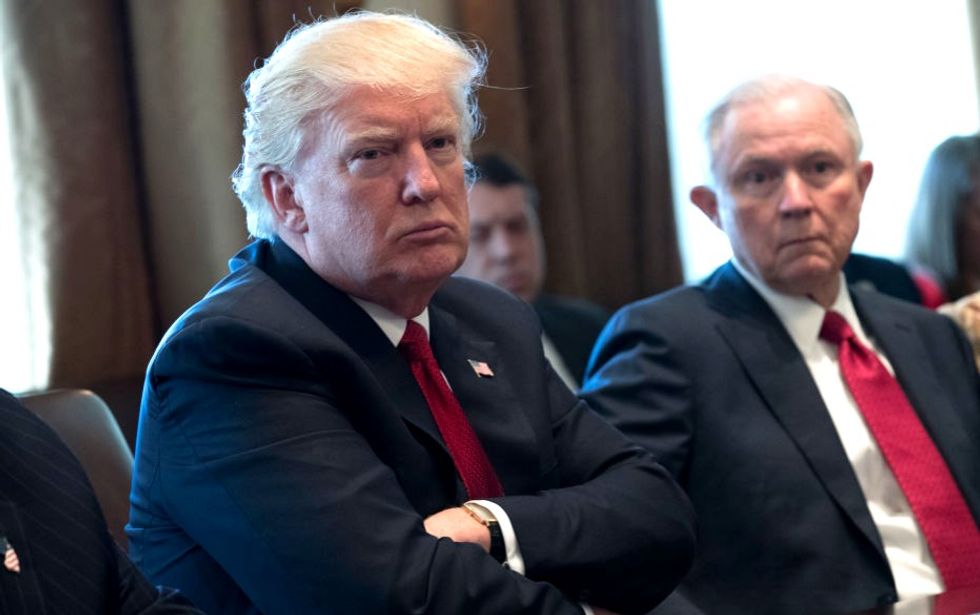 James Schwab Jr. joined the Department of Homeland Security in 2015 to serve as a spokesperson for Immigration and Customs Enforcement in San Francisco. According to a 2016 profile by his hometown paper, Schwab loved his job. But now he's unemployed.

“I just couldn’t bear the burden — continuing on as a representative of the agency and charged with upholding integrity, knowing that information was false,” Schwab told CNN.

Schwab resigned over what he characterized as “false” and “misleading” statements. He singled out both Attorney General Jeff Sessions and ICE Acting Director Thomas D. Homan.
“I quit because I didn’t want to perpetuate misleading facts. I asked them to change the information. I told them that the information was wrong, they asked me to deflect, and I didn’t agree with that. Then I took some time and I quit.”

"I told them that the information was wrong, they asked me to deflect, and I didn’t agree with that. Then I took so… https://t.co/gLLWCdxsOP
— ProPublica (@ProPublica) 1520946074.0

Schwab's resignation came about due to statements by Homan and Sessions. Both federal government officials claimed hundreds of “criminal aliens” evaded ICE in February because Oakland Mayor Libby Schaaf warned them in advance. Schwab said he resisted that false characterization, but said ICE instructed him to “deflect” any media questions requesting facts.

In an official statement, Trump's unconfirmed acting ICE director, Homan, stated  “864 criminal aliens and public safety threats remain at large in the community, and I have to believe that some of them were able to elude us thanks to the mayor’s irresponsible decision. Unlike the politicians who attempt to undermine ICE’s critical mission, our officers will continue to fulfill their sworn duty to protect public safety.”
“Those are 800 wanted criminals that are now at large in that community," said AG Sessions in Sacramento last week. "800 wanted criminals that ICE will now have to pursue with more difficulty in more dangerous situations, all because of one mayor’s irresponsible action.”
Schwab maintains both the number of potential arrests and blaming Oakland's Democratic mayor is inaccurate at best, outright lies at worst.
“I didn’t feel like fabricating the truth to defend ourselves against her actions was the way to go about it," Schwab said. "We were never going to pick up that many people. To say that 100 percent are dangerous criminals on the street, or that those people weren’t picked up because of the misguided actions of the mayor, is just wrong.”

An official (yes another one) resigns from the Trump Administration because he says he will not lie for them, as th… https://t.co/n5Aj7veGqI
— Kurt Eichenwald (@Kurt Eichenwald) 1520951265.0

In the last 12 hours, Trump lost the Secretary of State, the spokesman for the ICE Field Office of San Francisco, a… https://t.co/i7XZQXbgcX
— Matthew Chapman (@Matthew Chapman) 1520947949.0

President Trump called Schaaf a "disgrace" during a campaign rally in Pennsylvania. Trump claimed ICE prepared to arrest “close to 1,000 people,” but only got “a fraction” of that thanks to the Democratic mayor of Oakland.
But Schwab said ICE never arrests 100 percent of their targets in any operation. The president, Sessions, and ICE officials' claims otherwise create a very misleading picture.
The missed arrests in the recent Northern California operation were far from unusual. The operation originally expected to arrest less than 232 suspected undocumented immigrants, making the outcome more successful than planned, not less like the Trump administration claims.
DHSDonald TrumpHomeland SecurityICEJames Schwab Jr.Jeff Sessions