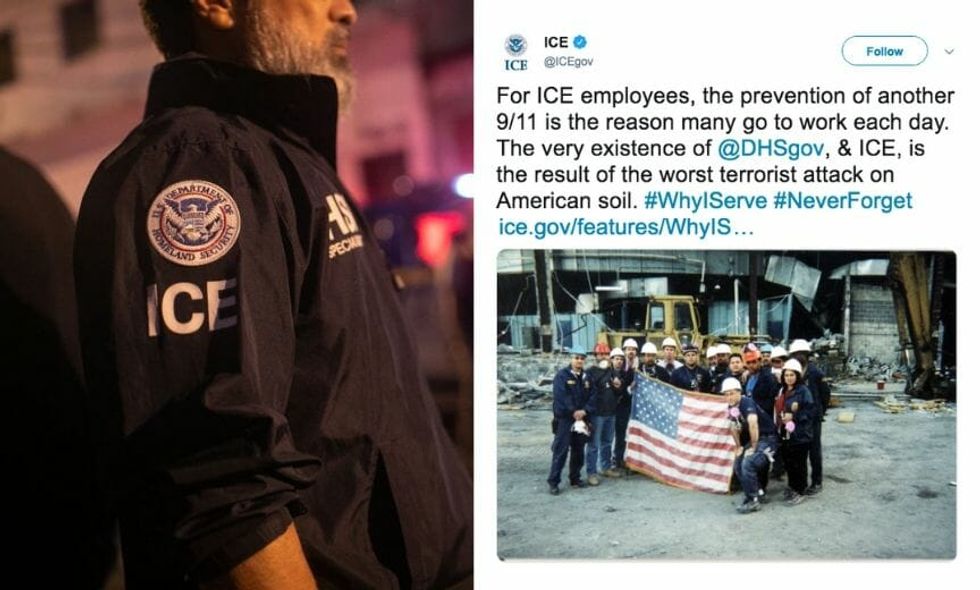 September 11 since 2001 has become a day of reflection for many individuals and organizations. The Immigration and Customs Enforcement (ICE) agency of the Department of Homeland Security (DHS) was no exception.

Like many federal agencies, they took the opportunity to commemorate 9/11. But unlike others—many who actually participated in threat mitigation and recovery efforts after the attack—ICE decided to herald their own accomplishments rather than make a statement about those who died or those who stepped up.

The agency—created in 2003 after President George W. Bush created the new Homeland Security cabinet position in the wake of 9/11—claimed the 2001 terrorist attacks were their reasons for their current actions while including a 2001 photo of rescue workers at Ground Zero in New York City.

Their self-congratulatory tweet did not sit well. The Refugee and Immigrant Center for Education and Legal Services (RAICES) of Texas blasted back at them on Twitter.

RAICES Texas was far from alone in their condemnation of the post or the agency's role in the Trump administration's family separation policy.

The Trump administration itself did not come away unscathed.

Many pointed out ICE's focus was in the wrong place for threats to the United States.

@ICEgov @DHSgov It's fortunate you're on the job. Especially when you consider the history of Mexican and Central… https://t.co/bIQYnCbk2y
— Emily Litella (@Emily Litella) 1568220143.0

Prior to September 2018, no children died in Department of Homeland Security custody for over a decade. Now at least 6 children have died while in the custody of the United States government.

None were suspected terrorists.

If you agree that families belong together, this shirt is available here.