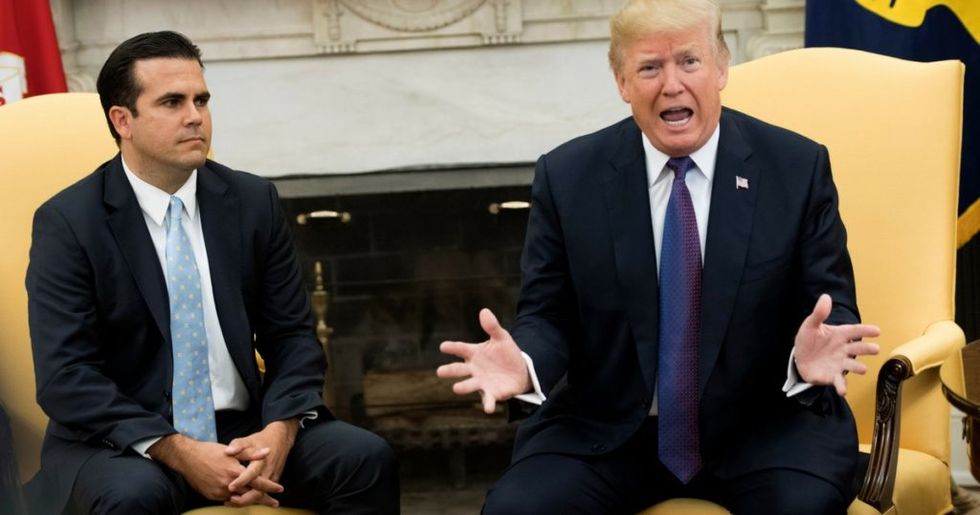 Nearly 3,000 people perished when Hurricane Maria tore through Puerto Rico in 2017, according to a new study from the George Washington University Milken Institute School of Public Health.

Maria slammed into the island territory as a category 4 storm, packing 154 mile-per-hour winds and causing more than $100 billion worth of damage as it ravaged homes and devastated local infrastructure.

"Even though it is an estimate, we are officially changing, or we are putting an official number to the death toll," Gov. Ricardo Rossello told reporters Tuesday. "We will take the 2,975 number as the official estimate for the excess deaths as a product of Maria."

Carlos Mercader, executive director of the Puerto Rico Federal Affairs Administration, submitted a report on the study, which was conducted at the behest of the Puerto Rican government, to CBS News on Tuesday.

"The reality is that we take this very seriously," Mercader said on CBSN. "We mourn those people that died because of this storm and we have a responsibility of making sure that we prepare Puerto Rico for a future event like this."

Through statistics obtained from the Vital Statistics Records division of the Puerto Rico Department of Health, "the study looked at historical death patterns from 2010 to 2017 to estimate how many people would have died had Hurricane Maria not hit the island," CBS reported.

"That figure was then compared to the actual number of deaths from September 2017 through February 2018," CBS wrote, "to determine what the report describes as the 'estimate of excess mortality due to the hurricane.'"

Poor populations were especially susceptible to hurricane-related fatalities, the report stated. It said that the risk of death was "45% higher and persistent until the end of the study period for populations living in low socioeconomic development municipalities."

The study concluded that males over the age of 65 had an elevated risk of death through February 2018, when the study ended.

"Overall, we estimate that 40% of municipalities experienced significantly higher mortality in the study period than in the comparable period of the previous two years," the report says.

Additionally, the study was able to determine why the initial death toll from the government was so low. A lack of preparedness for the storm, and physicians ill-equipped to record causes of death, both contributed to the substantial statistical discrepancy.

"The official government estimate of 64 deaths from the hurricane is low primarily because the conventions used for causal attribution only allowed for classification of deaths attributable directly to the storm, e.g., those caused by structural collapse, flying debris, floods, and drownings," the report says. "During our broader study, we found that many physicians were not oriented in the appropriate certification protocol. This translated into an inadequate indicator for monitoring mortality in the hurricane's aftermath."

The report noted that "physician unawareness of appropriate death certification practices after a natural disaster and the Government of Puerto Rico's lack of communication about death certificate reporting prior to the 2017 hurricane season substantially limited the count of deaths related to Maria."

Lack of proper training on how to "appropriate death certification practices, especially in a disaster setting" also led to the underestimated casualty total.

"Those interviewed said they did not receive information about how to certify deaths during, or in conditions created by, a disaster," the report said, adding that a lack of communication between agencies further exacerbated the problem.

"There were a lot of things that failed in their response and we take responsibility for that," Mercader said.

"I do think this study helps to validate that sense that many people had that there were just too many deaths," said Lynn Goldman, dean of the university's Milken Institute School of Public Health.

Twitter blasted President Donald Trump for his poor handling of the disaster.

Residents of Puerto Rico are citizens of the United States too, social media pressed.

Others mocked Trump for throwing paper towels at survivors during his visit to the island in the aftermath of the storm.

@AP @Fahrenthold The paper towel incident will stay with me through all elections including 2020.
— Peter McGovern (@Peter McGovern) 1535486291.0

@AP Wow that’s so tragic and heartbreaking. President Trump is to blame for being negligent and cruel. He ignored t… https://t.co/nzrETksagX
— VeraGen (@VeraGen) 1535486453.0

Trump also wasn't let off the hook for claiming that only 16 people perished in the storm.

@AP "Sixteen people versus in the thousands. You can be very proud of all of your people and all of our people work… https://t.co/kR2FYBvbix
— Matthew Verkamp (@Matthew Verkamp) 1535485901.0

We must not let the president's personal and political scandals detract from the tragedy American citizens faced during Hurricane Maria. The administration's handling of Hurricane Maria was, is, and will continue to be, one of them.