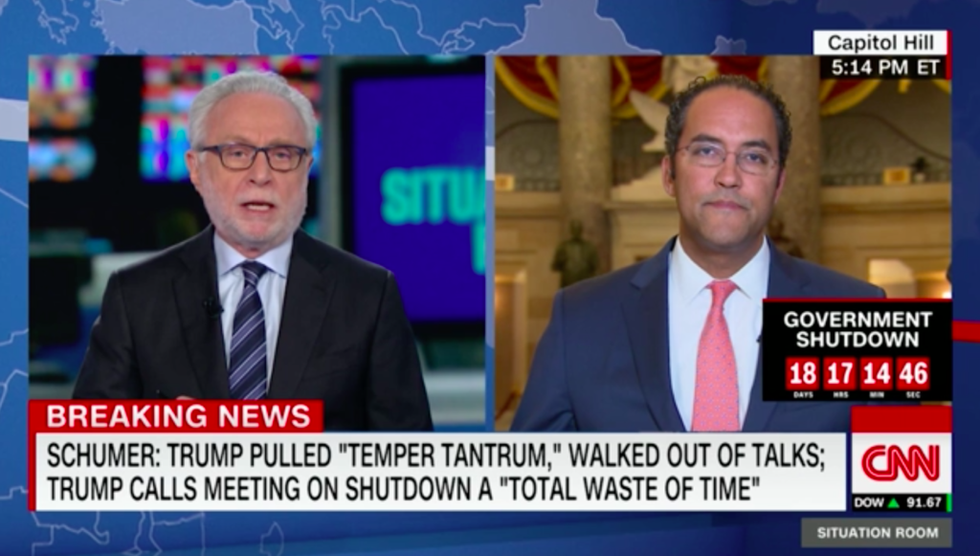 President Donald Trump repeatedly claims only Democrats oppose his multi-billion dollar border wall. He also claims Republicans are completely unified in supporting it and back his decision to shut down portions of the government—including the Department of Homeland Security—until he gets the billions of dollars he wants for his wall.

But Texas Republican Representative Will Hurd stated otherwise in an interview with CNN.

When asked for his thoughts on the wall, Hurd—a member of both the House Homeland Security and Intelligence Committees—stated:

"I think building a concrete structure sea to shining sea is the most expensive and least effective way to do border security."

“I think building a concrete structure sea to shining sea is the most expensive and least effective way to do borde… https://t.co/pFys1P4MUx
— CNN Politics (@CNN Politics) 1547072577.0

Hurd's assessment reflects the thoughts of experts on border security who point out advancements in technology that are utilized more effectively than a wall and could be purchased with a fraction of the money Trump wants for his wall. The Department of Homeland Security budget requests to Congress never included a wall—prior to Trump appointing Kirstjen Nielsen to the post—as experts within the department also understand actual border security and immigration statistics.

The majority of undocumented immigrants who enter the United States still come in legally on a variety of visa types—student, tourist, work—then simply stay after their visa expires. Their arrivals are through legal points or entry on planes or in other types of vehicles, not by walking across the southern border.

Hurd went on to comment on the President's threat to declare a national emergency if he did not get his border wall billions.

"It would be an amazing misuse and abuse of power."

“It would be an amazing misuse and abuse of power,” GOP Rep. Will Hurd says of President Trump’s consideration of d… https://t.co/AeGaIBQ7Aj
— CNN Politics (@CNN Politics) 1547073172.0

So why—if every expert in border security and immigration statistics indicate a wall is ineffective and a waste of billions that could be better used by Homeland Security in upgrading technology and increasing staffing—does Trump insist he get his multi-billion dollar wall or else?

Conservative media pundits like Ann Coulter and hosts on Fox News mock him about his campaign promise and popular Make America Great Again rally chant of "build a wall."

However as polls indicate, the majority of United States voters oppose the waste of billions of dollars to pander to right wing pundits, the conservative press and MAGA rally supporters. People voiced just such in response to Hurd's remarks on CNN.

Some pointed out flaws in the Trump one-size fits all multi-million dollar prototypes that were already constructed and failed in testing.

@CNNPolitics Every mile of the border has it's own geographical features and problems. Can't put up a wall without… https://t.co/yNIVRIrZP8
— BonBons (@BonBons) 1547073614.0

Others voiced support for Hurd's assessment.

Others suggested the GOP listen to their member of Congress who represents a border district.

However a few Trump supporters failed to understand the points Hurd made but were corrected.

As Trump's government shutdown tactic to gain his border wall funding approaches the third week, the President heads to the border for a photo-op to try to gain the support his presidential address on Tuesday failed to garner. If all other attempts to force Congress to give him the billions he wants fail, Trump stated he would likely declare a national emergency to bypass Congress.