A Hunting Website Is Offering the Chance to Win a Hunting Trip With Donald Trump Jr., and Their Over the Top Description of Don Jr. Has People Rolling 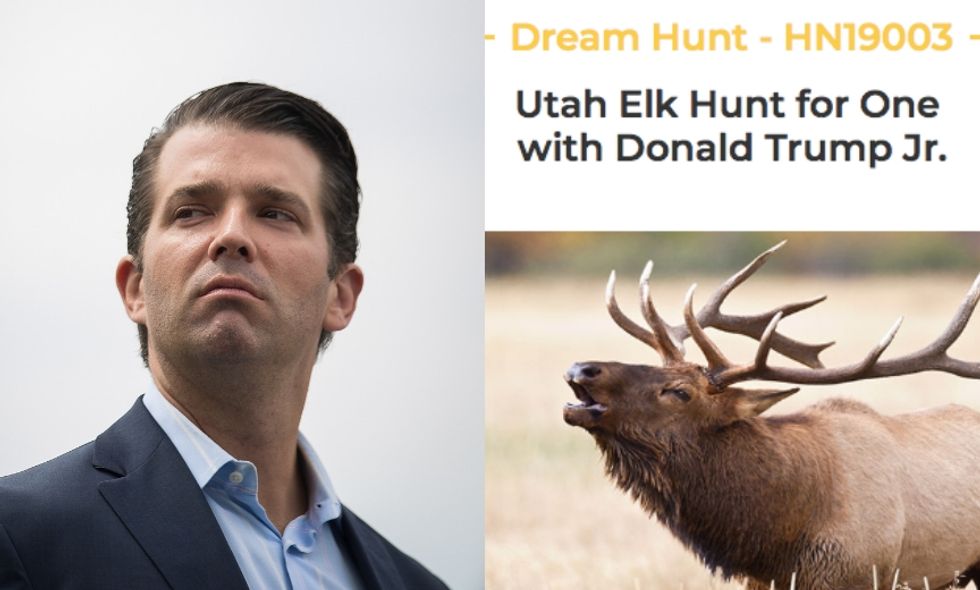 Hunter Nation, a hunting advocacy and lobbying website, has announced it will offer a “once-in-a-lifetime opportunity” to join Donald Trump Jr. on a five-day elk hunt. The entry fee is $10.

It's the description of Trump Jr. as a leading conservationist that has people rolling their eyes, however:

“Join Donald Trump, Jr., the modern-day Teddy Roosevelt, in Utah for a 5-day adventure hunting elk in some of the most majestic land our great country has to offer. You will have to go a long way to find a bigger advocate for our hunting lifestyle and a more passionate hunter and conservationist than Don, Jr.

The opportunity to share a hunting camp with him is truly priceless. Gain a new perspective on real-life conservation from one the leading experts on the subject, all while you hunt one of the most prized big game animals on earth. This hunt is targeted for Fall of 2019.”

A hunting advocacy and lobbying website has announced it is offering the “once-in-a-lifetime opportunity” to take p… https://t.co/CMVj8HhoMC
— Mel Tansill (@Mel Tansill) 1550519474.0

Donald Trump Jr, "the modern-day Teddy Roosevelt"? Theodore Roosevelt was a President of the US, a conservationist… https://t.co/WdI5lFWwAl
— Darren Adams (@Darren Adams) 1550512857.0

Trump Jr. has not commented on his involvement with Hunter Nation's competition, but his girlfriend, Kimberly Guilfoyle posted a photo of herself and Trump Jr. in front of a Hunter Nation banner at an expo in Salt Lake City, Utah, with the caption: "So many patriots and lovers of liberty and freedom here.”

Trump Jr. and his brother, Eric Trump, have in the past been criticized for taking photographs of themselves on big game hunting trips.

In 2012, Gothamist reported that images of the two men posing with slain animals had begun to circulate on the internet:

"Animal rights activists are revolted by a series of trophy photos that have emerged showing Eric and Donald Trump Jr. posing with a dead elephant, kudu, civet cat and waterbuck while on a big game safari in Zimbabwe last year. In one photo, Donald Jr. proudly holds a dead elephant tail in one hand and a knife in the other. In another, the brothers are seen standing beside a 12’8″ crocodile hanging from a noose off a tree. Activists obtained the photos and created [a] video montage of the Trumps’ big hunt[.]"

Trump Jr. later addressed the controversy in a couple of messages he posted to Twitter.

@exclamation I can assure you it was not wasteful the villagers were so happy for the meat which they don't often get to eat. Very grateful
— Donald Trump Jr. (@Donald Trump Jr.) 1331586822.0

The Trump sons' hunting activities have also faced increased public scrutiny after it emerged that the Trump administration would loosen restrictions around the import of elephant trophies from Zimbabwe and Zambia.

“Legal, well-regulated sport hunting as part of a sound management programme can benefit the conservation of certain species by providing incentives to local communities to conserve the species and by putting much-needed revenue back into conservation," a U.S. Fish and Wildlife Service spokesperson said in response to the controversy.