Howard Schultz Really Doesn't Want to Be Called a 'Billionaire' Anymore, and People Can't Stop Mocking the Phrases He Wants to Be Called Instead 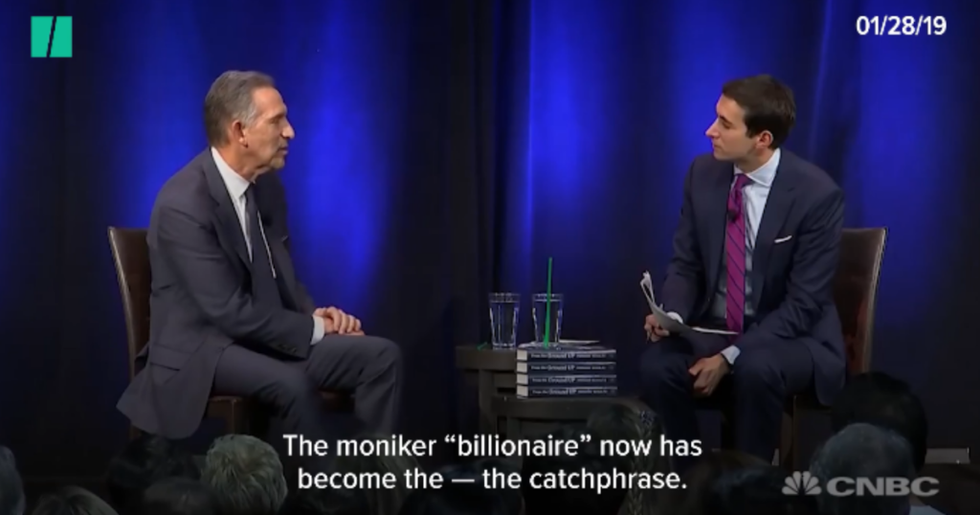 Former Starbucks CEO and potential independent 2020 presidential candidate Howard Schultz no longer wants to be referred to as a billionaire because he believes it has "become the catchphrase."

Schultz, whose net worth is $3.4 billion, would prefer the term "people of means," he told Andrew Sorkin of the New York Times and CNBC on Monday.

"Do you believe billionaires have too much power and influence?" Sorkin asked Schultz.

"The moniker 'billionaire' now has become the catchphrase," Schultz replied. "I would rephrase that and say that 'people of means' have been able to leverage their wealth and their interest in ways that are unfair, and I think that speaks to the inequality but it also speaks to the special interests that are paid for people of wealth and corporations who are looking for influence."

Except that is exactly what Schultz is doing, and it is definitely not the way to win over liberal voters.

People floated other possible labels, and they are perfect.

Yes and Americans should be referred to as “people who don’t want Howard Schultz to be president” https://t.co/l9oomimwNW
— Sam Sharma (@Sam Sharma) 1549331298.0

@AOC @AnandWrites @andrewrsorkin I would rephrase that because billionaire is a hot button word, the Resource Hoard… https://t.co/QWYWGJAwpu
— Jered's Pottery (@Jered's Pottery) 1549339716.0

"It's so un-American to think that way," Schultz complained. "There is a problem that she has identified, but I think the way she's going about it... unfortunate, she's a bit misinformed."

AOC did not miss a beat. She clapped right back, knocking Schultz for plugging his brand during the interview.

"🤣 with those dang green Starbucks straws in the cups too, can’t miss a brand moment," AOC tweeted.

@AOC @AnandWrites @andrewrsorkin You should name the 70% tax plan after him since he wants attention 😉
— killermuses (@killermuses) 1549336201.0

Many are wondering what exactly Schultz is aiming for, considering the current zeitgeist.

@AOC @AnandWrites @andrewrsorkin Why is he even running for president? To change a system that made him a billionai… https://t.co/GOMhxvkUX3
— Martin Pong (@Martin Pong) 1549337281.0

@AnandWrites @andrewrsorkin This dude should stop giving interviews until he figures out what he is trying to accomplish
— Engineer (@Engineer) 1549331403.0

Last month, Schultz, a former Democrat, also dumped on Senator Kamala Harris's (D-CA) Medicare for All plan, calling it "not American" on CBS This Morning.

"That's not correct. That's not American," Schultz said. "What's next? What industry are we gonna abolish next? The coffee industry?"

Because the coffee industry and the healthcare industry are totally comparable.