We Now Know Why Hope Hicks Resigned, and It Says Everything About This White House 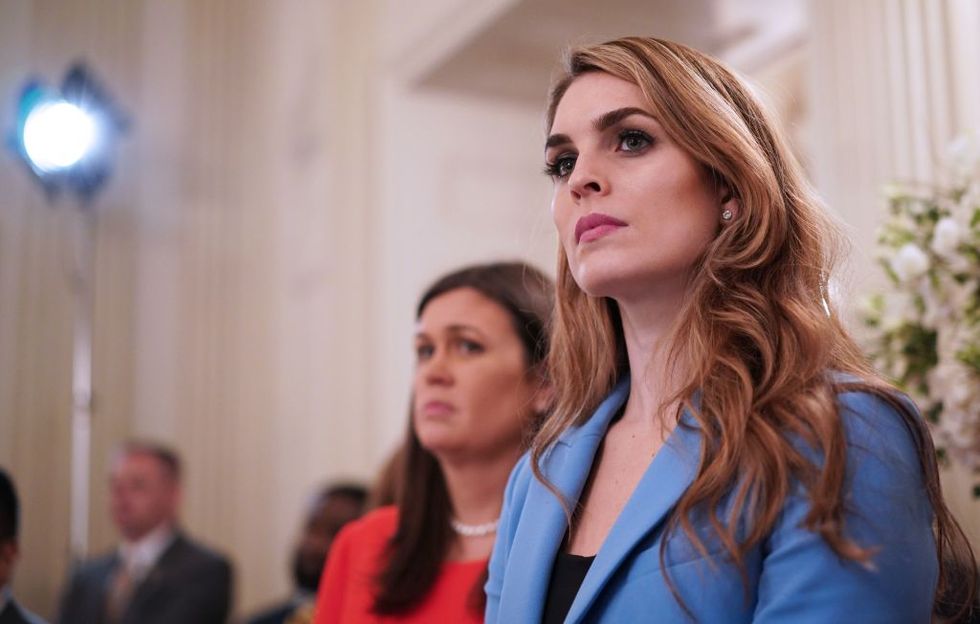 White House Communications Director Hope Hicks watches as US President Donald Trump takes part in a listening session on gun violence with teachers and students in the State Dining Room of the White House on February 21, 2018. (MANDEL NGAN/AFP/Getty Images)

President Donald Trump reportedly "berated" Hope Hicks, his former White House Communications Director, after she admitted to House investigators that her work for the president had occasionally required her to tell white lies. Hicks turned in her resignation a day after nearly nine hours of private testimony before the House Intelligence Committee. Despite her admission, Hicks was adamant that she had told the truth on matters related to Russia and the president's alleged collusion with Russian operatives to subvert the 2016 election.

Her fealty to the president did not protect her in the end, according to anonymous sources who spoke to the press, and he nonetheless scolded her after she'd given her testimony.

"The President is said to have asked Ms. Hicks "how she could be so stupid," CNN's Erin Burnett reported, suggesting that the scolding was the "final straw" for Hicks.

White House spokesman Hogan Gidley later said the allegation is "false." Nor does the president's official statement provide any indication that he'd sparred with Hicks over matters public or private:

Hope is outstanding and has done great work for the last three years. She is as smart and thoughtful as they come, a truly great person. I will miss having her by my side but when she approached me about pursuing other opportunities, I totally understood. I am sure we will work together again in the future.

In a statement of her own, Hicks said: said: "There are no words to adequately express my gratitude to President Trump. I wish the president and his administration the very best as he continues to lead our country."

Even so, the timing of her resignation has prompted many commentators to surmise that Hicks was ousted for telling the truth about her her job working for a president known for outright exaggerations and blatant falsehoods.

#HopeHicks resignation is laced with the type of irony you can only get from corruption. If she hadn't been willing… https://t.co/MBuHwyGBAI
— Wes Jordan✌💙 (@Wes Jordan✌💙) 1519858803.0

Hicks had a reputation for being unfailingly loyal to the president. She was one of the last two remaining White House staffers who had been with Trump through his business and campaign, so her resignation has come not just as a surprise to several White House insiders, but as a sign that the administration could be reaching a tipping point as the president continues to spiral over the special counsel's Russia probe.

Things are still pretty bleak inside the White House," a source told Buzzfeed News. "I've talked to several people in the last week trying to find a way out, but they can't get out because no one is really hiring people with Trump White House experience. Not a fun time to say the least."

Lawmakers who sat in on the testimony Hicks gave before the House Intelligence Committee said she repeatedly declined to answer questions about the presidential transition or her time in the White House. She further told investigators that she'd been instructed by the White House to discuss only her time on the campaign. Hicks did not, interestingly enough, invoke executive privilege.

During an appearance on The View earlier today, Representative Adam Schiff (D-CA), the top-ranking Democrat on the House Intelligence Committee, said he does not "know what was involved in the timing" of her announcement of Hicks's resignation.

When asked about a New York Times report in which Hicks said she occasionally told "white lies" on behalf of Trump, Schiff said he wished that information from the interview had "never left the committee."

Schiff did not provide clarification as to what the "white lies" Hicks told were, but he did note that when an interview subject admits to lying on behalf of "the boss," then "it reflects whether they'll be truthful inside the committee."

"The most significant issue I have with her testimony are the whole areas she refused to testify on at the instruction of the White House," Schiff said, adding "that's not her fault."