Trump Aide Repeatedly Referred to Puerto Rico as 'That Country' in an Interview, and Do You Want to Tell Him or Should I? 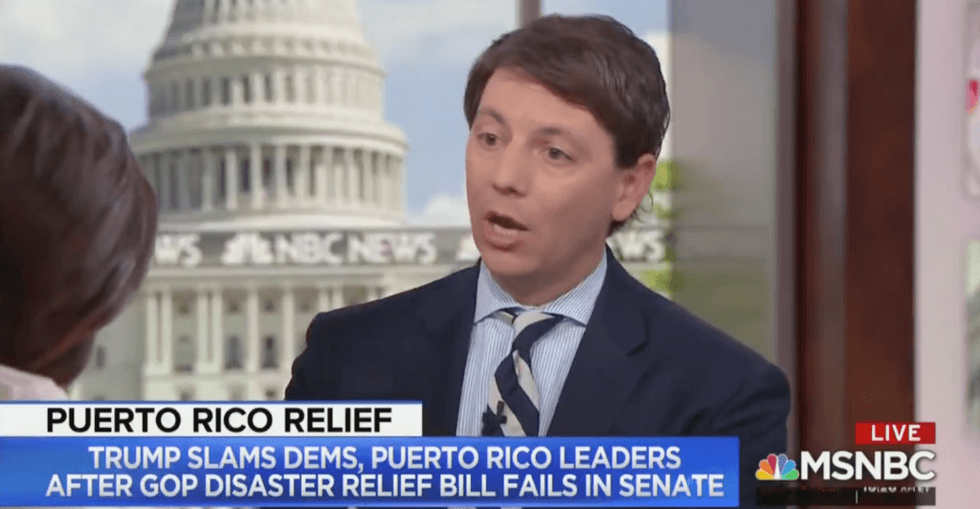 The White House Deputy Press Secretary in an interview with MSNBC referred to Puerto Rico as "that country" twice even though it's been a U.S. territory for more than two centuries.

“With all they’ve done in that country, they’ve had a systematic mismanagement of the goods and services we’ve sent to them,” Gidley said in comments regarding the national response to Hurricane Maria in 2017. “You’ve seen food just rotting in the ports. Their governor has done a horrible job. He’s trying to make political hay in a political year, and he’s trying to find someone to take the blame off of his for not having a grid and not having a good system in that country at all.”

Gidley was swiftly called out by MSNBC's Hallie Jackson:

Gidley later attributed his misstatements to “a slip of the tongue," but for many, his statements are symbolic of the Trump administration's disregard for its own people.

The Democrats today killed a Bill that would have provided great relief to Farmers and yet more money to Puerto Ric… https://t.co/SX45v3igaS
— Donald J. Trump (@Donald J. Trump) 1554173420.0

The president further claimed that the island territory had received "91 Billion Dollars for the hurricane, more money than has ever been gotten for a hurricane before" and said that Puerto Ricans "only take from the USA."

In fact, a Washington Postreport revealed that $11 billion has been sent to the island so far, far less than the $120 billion already spent in response to 2005's Hurricane Katrina. The $91 billion sum Trump cites is an estimate of Puerto Rico’s recovery over the next few decades.

Moreover, a Government Accountability Office report issued last September found no evidence of the fraud or misappropriation of resources that Trump or Gidley suggests took place. The agency actually slammed FEMA, which Trump has often praised.

“FEMA did not have enough bilingual employees to communicate with local residents or translate documents,” the GAO wrote, which “resulted in further delays while staff were reshuffled from other disasters to Puerto Rico.”

A George Washington University study published in August 2018 revised the island’s official death toll to 2,975 people, many of whom died due to lack of aid, electricity, water, and access to medical care. The Trump administration shuffled its feet in response to the disaster and was savaged for offering aid remarkably quickly to the victims of Hurricanes Harvey and Irma by comparison.