"That was not a denial." 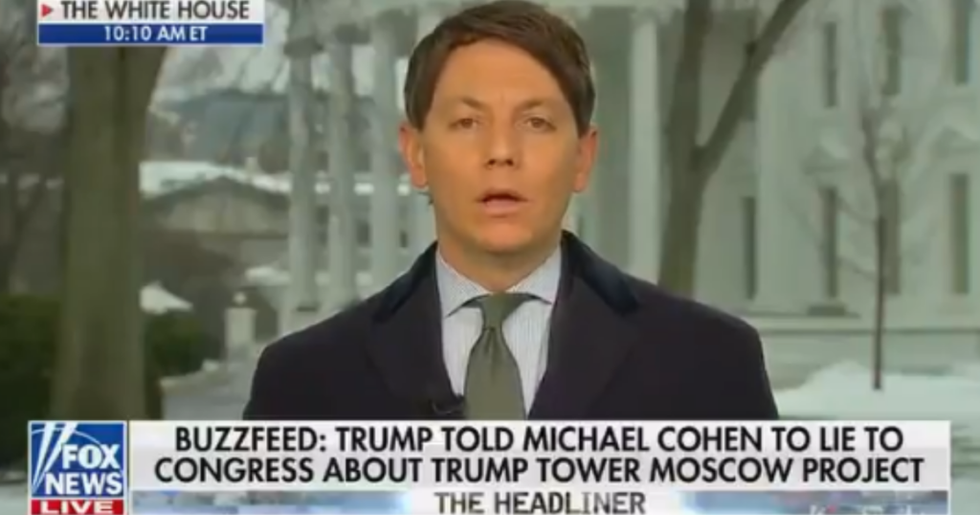 Deputy White House Press Secretary Hogan Gidley on Friday refused to deny that President Donald Trump directed his former lawyer and fixer Michael Cohen to lie to Congress about a secret Trump Tower Moscow deal they were pursuing during the 2016 campaign.

BuzzFeed News reported on Thursday that Special Counsel Robert Mueller’s office “learned about Trump’s directive for Cohen to lie to Congress through interviews with multiple witnesses from the Trump Organization and internal company emails, text messages, and a cache of other documents. Cohen then acknowledged those instructions during his interviews with that office."

In appearance on Fox News' America's Newsroom, Gidley was given three chances to refute BuzzFeed's reporting. Instead, he began his non-answer by attacking the media.

“So you’re saying the president did not tell Michael Cohen to do that?” host Bill Hemmer asked.

"I'm telling you right now this is exactly why the president refuses to give any credence or credibility to news outlets because they have no ability to corroborate anything they're putting out there. They're just using innuendo and shady sources."

Hemmer pressed Gidley a second time: "That was not a denial of my question."

“No, but the premise is ridiculous,” Gidley said, still offering no denial. “We’re also talking about a person in Michael Cohen, who quite frankly has now been proven to be a liar. He self-admits that he’s a felon. So to give him any credibility, it just doesn’t warrant any response from the White House or this president.”

Gidley was then asked by Sandra Smith if it was "true or false" that Trump reportedly instructed Cohen to lie to Congress.

“Right, but the president’s attorneys have already addressed this,” Gidley replied. "I'm not going to give any credence or credibility to Michael Cohen who's a convicted felon and an admitted liar. That's just ridiculous and I'm not going to do that from the White House."

Gidley's opaque responses have a familiar ring. Remember this gem?

White House advisor Kellyanne Conway offered a similar deflection on Fox News earlier in the day. “The president weighed in on this on Twitter this morning, so I’ll refer you to that,” Conway said.

@kylegriffin1 Kellyanne did something similar. No direct denial, just complaints about the sourcing. So, yes, we k… https://t.co/XZhWxLYT7W
— Coretta (@Coretta) 1547833357.0

@kylegriffin1 He's taking lessons from Sarah and Kellyanne.. They all know how to hedge the truth.. Talk fast and ignore the question.
— pamela walker (@pamela walker) 1547832618.0

Gidley is also grossly misrepresenting the nature of the BuzzFeed report.

Cohen was not the source.

Anyone who actually read the report would know this.

@sppeoples Should be pointed out that in all likelihood Gidley has no idea if the story is true or not
— QuizzicalRepub (@QuizzicalRepub) 1547825043.0

Cohen in November pleaded guilty to a slew of crimes including lying to Congress and was sentenced to three years in prison.

His testimony has become an invaluable cog in Special Counsel Robert Mueller's investigation into Trump's relationship with Russia and if the president obstructed justice.

Although there is debate over whether Trump obstructed justice when he fired FBI Director James Comey in 2017 over “this Russia thing,” the testimony Cohen gave as part of his plea agreement “is the first known example of Trump explicitly telling a subordinate to lie directly about his own dealings with Russia,” BuzzFeed learned. Trump “had at least 10 face-to-face meetings with Cohen about the deal during the campaign.”

BuzzFeed’s report, if true, offers the strongest available evidence to date that Trump was directing his underlings to obstruct an ongoing federal investigation.

Additionally, Trump's tweets about Cohen's father-in-law, which may amount to witness tampering, are a clear ploy to intimidate Cohen into not testifying before the House on February 7.

Cohen's legal advisor Lanny Davis said Thursday that Cohen does not intend to let "bully" Trump pressure him into not testifying.

On Friday, House Intelligence Committee Chairman Adam Schiff (D-CA) pledged to “do what is necessary” to confirm BuzzFeed's reporting.

"These allegations may prove unfounded, but, if true, they would constitute both the subornation of perjury as well as obstruction of justice," Schiff said Friday morning.

"Our committee is already working to secure additional witness testimony and documents related to the Trump Tower Moscow deal and other investigative matters," the Congressman said. "As a counterintelligence concern of the greatest magnitude, and given that these alleged efforts were intended to interfere with our investigation, our Committee is determined to get to the bottom of this and follow the evidence wherever it may lead."