We Now Know Why Senator Mazie Hirono Made an E-Mail From Brett Kavanaugh About Native Hawaiians Public, and It's All About Alaska 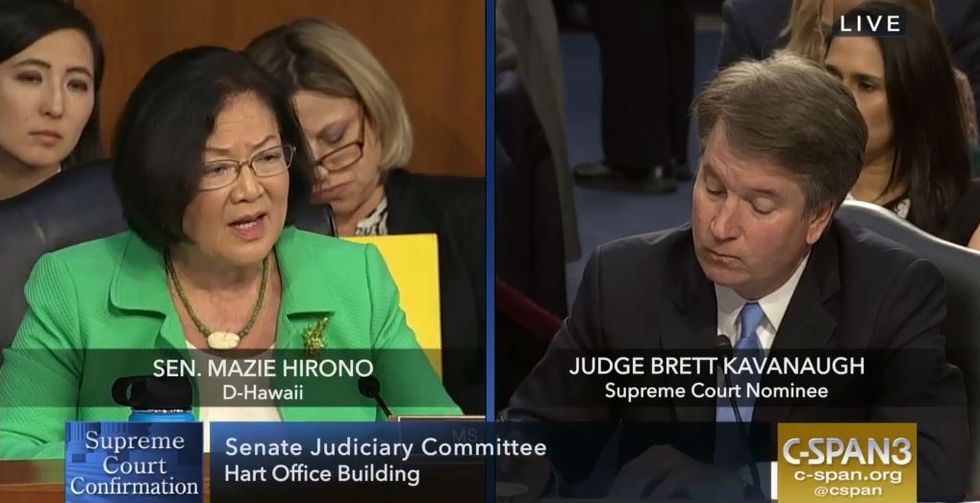 Democratic Senator Mazie Hirono (HI) is on the Senate Judiciary Committee, and as such has been front and center in the questioning of Brett Kavanaugh during his Supreme Court confirmation hearings.

Yesterday, Hirono made waves when she tweeted previously "committee confidential" emails from Kavanaugh revealing his troubling views on the status of native Hawaiians, who, Kavanaugh felt, do not qualify for certain government benefits as they do not qualify as "Indigenous people."

"any programs targeting Native Hawaiians as a group...is of questionable authority under the Constitution."

This set the stage for a Hirono's comprehensive questioning of Kavanaugh both about this email and about an opinion piece he wrote called Are Hawaiians Indians?

At the end of her questioning, she concluded that Kavanaugh's hostility toward the notion that Native Hawaiians do in fact qualify as "indigenous people" would have resonance in another state as well:

"Your argument raises a serious question about how you would rule on the constitutionality of programs benefitting Alaskan Natives. I think my colleagues from Alaska should be deeply troubled by your views."

You can watch the full smackdown below:

But while she says "my Alaska colleagues" it's likely that she has an audience of one here, namely Senator Lisa Murkowski of Alaska, who is widely seen as a potential Republican No vote on Kavanaugh.

Under the Hawaii Admission Act of 1959, Lands originally belonging to the Hawaiian monarchy then stolen by U.S. forces were ceded from federal control and back to the state of Hawaii for "the betterment of the conditions of the native Hawaiians."

Forty years later, Kavanaugh implied in his op-ed that because native Hawaiians are dispersed throughout the state rather than on reservations or in sects, they are undeserving of benefits extended to Native Americans.

Notably, Native Alaskans were also granted land and benefits with the Alaska Native Claims Settlement Act. By extension, the views Kavanaugh has expressed on indigenous peoples of Hawaii could reasonably be seen as a threat to indigenous peoples of Alaska as well. Hirono pointed this out, asserting that "her colleagues from Alaska should be deeply troubled."

Hirono's assertions that Alaskans should be troubled is adding even more pressure on Murkowski to block the confirmation:

@chrislhayes I think Murkowski needs to know about Kavanaugh's views on the constitutionality of programs benefitin… https://t.co/Px6YWZfbiN
— Darcy (@Darcy) 1536294328.0

It wasn't the only time Democrats of the Senate Judiciary Committee seemed to be systematically evoking concerns of Murkowski and a certain other Republican.

Senator Susan Collins (R-ME) is thought to be the second vital Republican in blocking Kavanaugh's appointment. Now, Democrats are putting the pressure on her as well, with one PAC raising over 500,000 dollars to Collins's opponent in the next election should she vote to confirm Kavanaugh.

Collins has previously stated that an anti-abortion justice would be "unacceptable." Yet when faced with a leaked Kavanaugh email from 2003 in which he appeared to contradict his repeated assurances that Roe v. Wade was settled law, Collins downplayed the revelation:

I am told that he was editing an op-ed for clarity and was merely stating a fact that three judges on the court were anti-Roe. If that’s the case then, and it’s not expressing his view, then I’m not sure what the point is.”

The statement has disturbed Democrats.

A source close to Susan Collins' office tells me she pre-approved Kavanaugh before Trump ever nominated him. Don't… https://t.co/lcTcU0yyyh
— Laura Bassett (@Laura Bassett) 1535738227.0

But hope, however far-fetched, is not dead for some.

The Senate Judiciary Committee has now embarked on the fourth day of the Kavanaugh hearing. It's untold how much additional pressure from Democrats will be needed for Murkowski and Collins to be convinced.