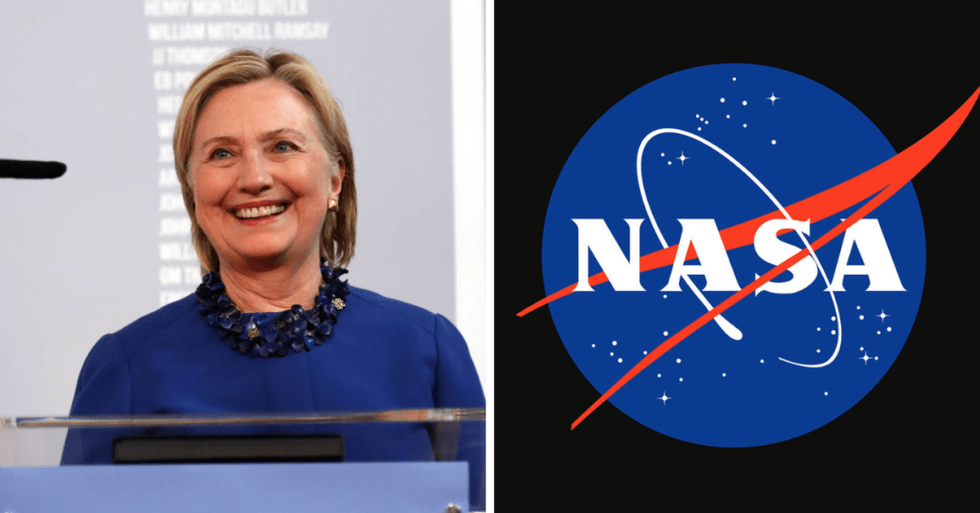 NASA scuttled its plans for its first all-female spacewalk because the agency doesn’t have enough spacesuits that fit the astronauts, forcing one of the two women on the mission, Anne McClain, to give up her spot to a male colleague. McClain, NASA said, thought a large-sized suit would be fine but after a spacewalk last week discovered that the medium-sized was a better fit.

“Anne trained in ‘M’ and ‘L’ and thought she could use a large but decided after [last] Friday’s spacewalk a medium fits better,” a Nasa spokeswoman, Stephanie Schierholz, said yesterday. NASA would stay on schedule because "it's safer and faster to change spacewalker assignments than reconfigure spacesuits."

The news quickly took social media by storm, but Hillary Clinton needed just three short words to explain why forcing McClain to give up her spot made no sense.

"Make another suit," she said.

The answer might not be so simple, though. Ars Technica's senior space editor Eric Berger wrote in a piece that while the change of plans is "unfortunate," it's ultimately the "right" decision:

It really was a "fit" issue in regard to spacesuits. After her EVA (extravehicular activity) last Friday in a "large" spacesuit, McClain realized she would be better able to work in a suit with a medium-sized torso. The torso is a fiber-glass shell, and if it is not snug it is difficult to maneuver the suit and reach control dials on the front. (Spacesuits sometimes fit differently in microgravity than in ground tests).

NASA has four spacesuits on the International Space Station, according to Jacklyn Kagey, lead officer for the upcoming spacewalk. Two of those suits are medium-sized, but only one is presently configured for a spacewalk (making the second one ready would require about 12 hours of work). Since Koch also uses a medium-sized suit, NASA planners decided the safest decision was to have Koch proceed in the medium suit and Hague participate in a larger suit.

NASA does have a spacesuit problem. A 2017 report by the agency's inspector general catalogued some of these issues. Notably, the agency's current stock of spacesuits were designed in 1974 and were first flown in 1981. "Designed for the Space Shuttle Program, each EMU has been partially redesigned and completely refurbished multiple times over the last 40 years," the report stated.

Of the 18 spacesuits originally produced, 11 remain in service. Those suits are rotated up to the station, and down, and are serviced on the ground. NASA performs maintenance on each suit after six years on the station, or 25 EVAs, whichever comes first. "We have a sustaining plan that gets us out through the remainder of the program with these particular suits," Todd said.

The 2017 report criticized the agency's efforts to develop a "next generation" of spacesuits that would be needed for activities at the Lunar Gateway, in orbit around the Moon, on the Moon, or on Mars. Part of the problem is that the destination for NASA's crewed programs has changed at least three times since 2005, and there have also been issues with stewardship. As a result, the report found, "The agency remains years away from having a flight-ready spacesuit ... suitable for use on future exploration missions."

This information aside, the announcement has continued to be criticized by high profile figures who say NASA should have foreseen the trouble.

Because it’s not enough to discriminate against women everywhere on earth. https://t.co/Hlg7iCnQ3D
— Heather Barr (@Heather Barr) 1553567686.0

Humanity: Able to land a rover on Mars and communicate with it, or have a probe get close to a comet hurtling throu… https://t.co/kI5q1PjTqV
— Olivier Knox (@Olivier Knox) 1553610941.0

McClain and Christina Koch were set to make history as the first all-female crew aboard the International Space Station to conduct a spacewalk to install lithium-ion batteries for one pair of the station's solar arrays. Koch will instead be joined by their male colleague, Nick Hague.

The all-female spacewalk was to be part of a series of three spacewalks to complete work on the ISS. McClain and her male colleague, Nick Hague, conducted the first in the series on March 22. McClain is tentatively scheduled to be joined by Canadian Space Agency astronaut David Saint-Jacques for the third spacewalk in the series on April 8.