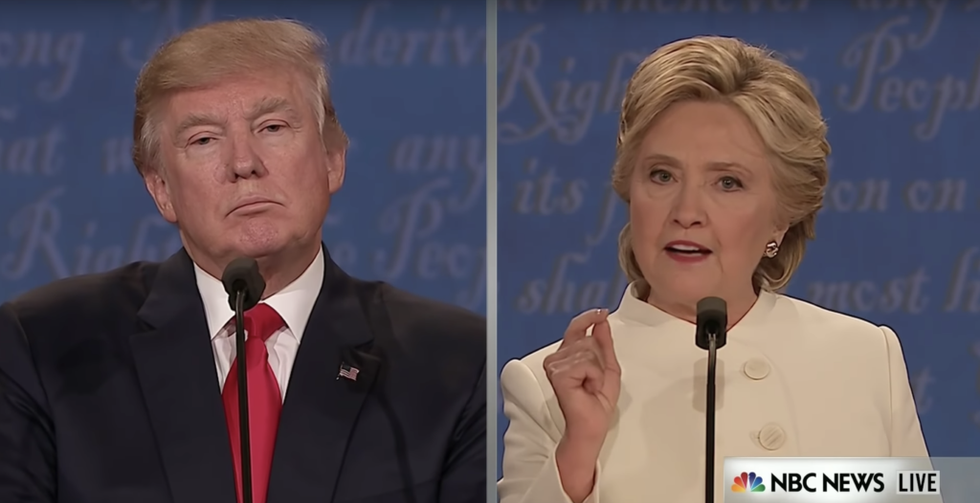 It's been years since then-presidential candidate Donald Trump faced off against former Secretary of State and 2020 Democratic presidential nominee Hillary Clinton in three debates ahead of the 2016 election.

The United States is now nearly three years into Donald Trump's presidency and it turns out that at least one of Secretary Clinton's warnings about the now-president came true: His inhumane efforts to collect and deport undocumented immigrants.

In the final debate before voters took to the polls, Clinton warned of a "deportation force" that would be enacted by Trump on a grand and illogical scale.

"I don't want to rip families apart," Clinton said. "I don't want to be sending parents away from children. I don't want to see the deportation force that Donald has talked about in action in our country...He said as recently as a few weeks ago in Phoenix that every undocumented person would be subject to deportation. Now, here's what that means."

"It means you would have to have a massive law enforcement presence, where law enforcement officers would be going school to school, home to home, business to business, rounding up people who are undocumented. And we would then have to put them on trains, on buses to get them out of our country. I think that is an idea that is not in keeping with who we are as a nation. I think it's an idea that would rip our country apart."

Sure enough, the Trump administration would go on to separate parents and children caught making the journey into the United States, claiming falsely that the policy began with former President Barack Obama's administration.

As recently as last week, Immigration and Customs Enforcement (ICE) rounded up 680 people thought to be undocumented from their places of work in Mississippi, leaving their children with no one to pick them up after the first day of school; with no idea where their parents were. It was the largest immigration action in a single state in all of U.S. history.

Trump has twice taken to Twitter to announce massive ICE raids across the country, and many accounts say that Latinx people—citizens and non-citizens alike—have begun to fear for their safety.

The woman who won the popular vote by over 3 million votes tried to warn us.

The former Secretary's prescience wasn't limited to Trump's immigration policies. She warned against his subservience to Russia as well.

However, despite her gut-punch of a loss in November 2016, Secretary Clinton hasn't stopped fighting against the very policies she warned us about.

Heading into next year’s elections, every voter must reckon with what their vote supports. At the border and arou… https://t.co/V4Ib5fXHnd
— Hillary Clinton (@Hillary Clinton) 1565272359.0

We can only hope the United States will hear and heed the warnings in 2020.