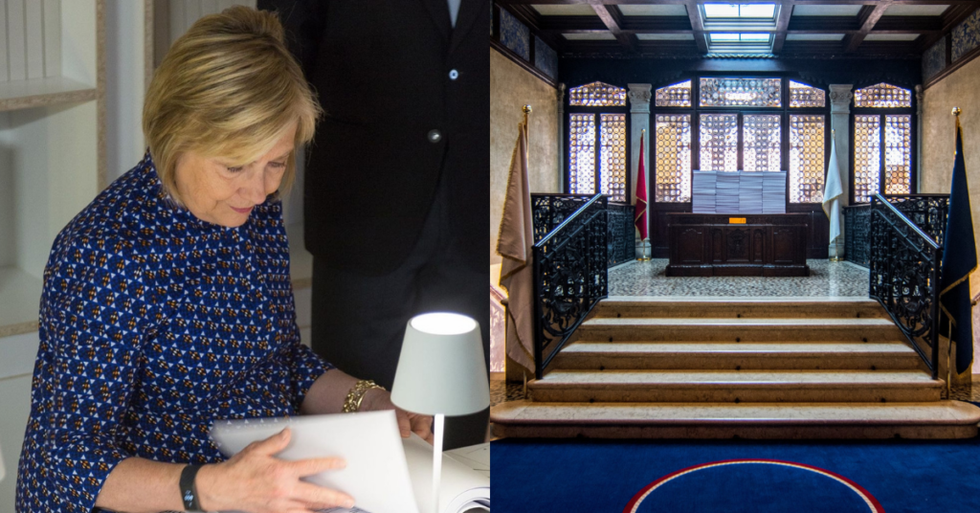 A lot can be said about former Secretary of State Hillary Clinton—and many people do—but it cannot be said she has no sense of humor. Anyone who enjoyed one of her speaking engagements or talk show appearances could see that humor on display.

And the former Democratic Senator for New York is even willing to joke about getting almost 3 million more votes than the other guy but not becoming President. One main issue during the 2016 election was emails sent and received by then Secretary of State Clinton on a private email server.

It was so prominent in every discussion of presidential candidate Clinton that scandals plaguing the presidency of Donald Trump—including rampant use of unsecured private phones, web based apps and email servers in the Trump administration—are often met with a chorus of "but her emails."

It was so prominent that artist Kenneth Goldsmith created an art piece based on Clinton, her emails and how it kept her from the Oval Office in Venice, Italy for Despar Teatro Italia. The exhibit—HILLARY: The Hillary Clinton Emails—features a replica of the Resolute Desk that resides in the Oval Office piled with printed copies of every one of Clinton's associated emails.

All 60,000 pages of the Hillary Clinton emails were shown on an exact replica of the Resolute Desk in the Oval Off… https://t.co/qirxxjCzk3
— Kenneth Goldsmith (@Kenneth Goldsmith) 1557941222.0

"The Hillary Clinton Emails," all sit on a perfect replica of the Resolute Desk from the Oval Office, and the facsi… https://t.co/i80QnmQwEX
— Christian Bok (@Christian Bok) 1560887668.0

"The Hillary Clinton Emails," all stand on a shrine, which faces another perfect replica of the Resolute Desk—situa… https://t.co/mCdtBEUPHb
— Christian Bok (@Christian Bok) 1560888105.0

Kenneth Goldsmith has bound the emails into dozens of white books, all available for perusal by the public in a "re… https://t.co/X4lGNHZWBP
— Christian Bok (@Christian Bok) 1560888226.0

So what did Hillary Clinton do about the exhibit? A late night Twitter tirade perhaps?

She arranged a visit of course. The exhibit curator—Francesco Urbano Ragazzi—told The Huffington Post via email:

"Someone close to Mrs. Clinton contacted us very informally a few days before her visit. We realized that it wasn’t a joke only when we saw the security service inside the exhibition space at 9 am on Tuesday."

The photo op was too good to pass up.

Including a group photo at the Resolute Desk replica accessible to the public.

Guess who came to visit in person the exhibition “Hillary: The Hillary Clinton emails” by artist and poet Kenneth Goldsmith yesterday? If you want to read the former US Secretary of State’s private emails, visit the show curated by Francesco Urbano Ragazzi at Despar Teatro Italia in Venice until November 24th or buy the book directly from neroeditions.com #hillaryclinton #hillary @the_internet_saga #kennethgoldsmith #goldsmith @hillaryclinton Photo ©️Gerda Studio

Clinton even took the time to stop by the reading area and read aloud from the collection. Of the contents of her emails, artist Goldsmith recounted Clinton saying to curator Urbano Ragazzi:

“They are just so boring.”

In an interview with ArtNet about the exhibit, Goldsmith agreed.

"I tried to read them all and I couldn’t. They were too boring and there were too many of them."

This mug is available here.