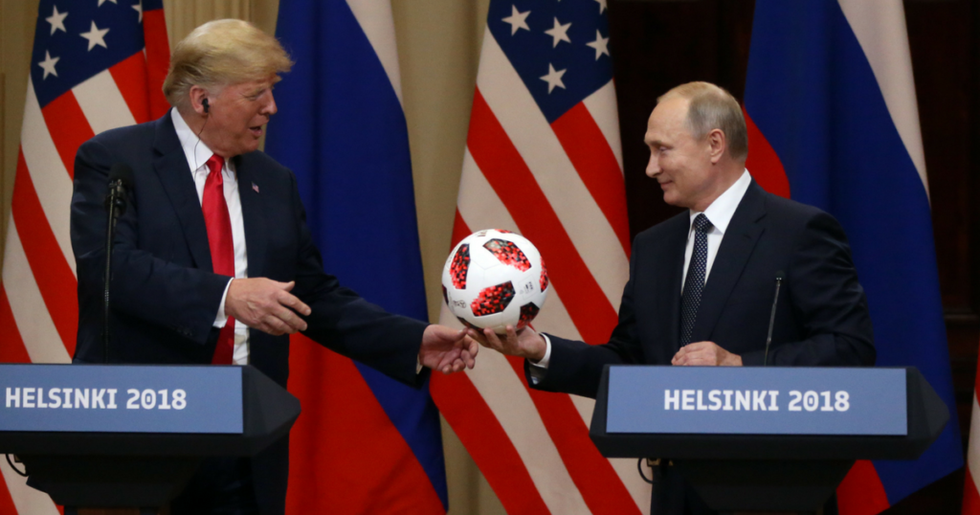 It turns out that soccer ball, like all Adidas soccer balls, contains a microchip capable of transmitting data to nearby mobile phones, Bloomberg reported on Wednesday.

The chip inside the Telstar 18 ball "allows two devices to exchange data or trigger certain actions when physically connected to each other," Adidas says on the company's website.

Using "Near Field Communication," or NFC, the chip "is passive and only sends out information" which can be received by NFC-enabled devices. iPhone users need an app to access the data and Androids can connect to the Telstar's tag through their wireless networks.

The Telstar 18's NFC chip cannot be rewritten or reprogrammed, Adidas states on their website. "It is not possible to delete or rewrite the encoded parameters."

In an email, White House Press Secretary Sarah Huckabee Sanders said the ball was subject to "the security screening process that is done for all gifts was done for the soccer ball,” but declined to comment on "further on security procedures."

No additional information is available on whether the ball presented to the president is an original or a duplicate, or whether the chip had been removed or replaced prior to being handed over to Trump. The White House has also not identified where the ball will be stored.

Shortly after Putin gave the ball to Trump, rumors about it being bugged began to circulate on Twitter.

Senator Lindsay Graham (R-SC) urged officials to "check the soccer ball for listening devices," adding that he would "never allow it in the White House."

Finally, if it were me, I’d check the soccer ball for listening devices and never allow it in the White House.
— Lindsey Graham (@Lindsey Graham) 1531757614.0

Others joked that the only Russian listening device attached to the ball was Trump himself, a result of his ongoing refusal to confront Putin over irrefutable evidence that Putin and operatives within the Russian government mounted a cyber attack on the 2016 presidential election.

@LindseyGrahamSC Hahaha good one about the soccer ball. NOW SO SOMETHING TO GET THIS SONOVABITCH OUT OF THE OVAL OFFICE. #TreasonSummit
— Vulcan🖖Writer✒Mom💁 (@Vulcan🖖Writer✒Mom💁) 1531787137.0

@LindseyGrahamSC What's a soccer ball when he's already had them in the Oval Office to assure them he fired Comey?… https://t.co/hyFO8OyuhN
— CanerdianGirl (@CanerdianGirl) 1531834886.0

But not everyone thought Graham's comment was funny. Calls for him to stand up to Trump flooded the replies.

@LindseyGrahamSC The time for jokes has long since been over. Our democracy is in danger and you don’t seem to care… https://t.co/ge3x5WIDpE
— VeryVexingIndeed🌀 (@VeryVexingIndeed🌀) 1531849719.0

A 2015 Forbes report showed a hacker had successfully used an NFC chip to place a virus on an Android phone through a link that was sent from the chip to the device.

Regardless, the odds of there being malicious malware embedded in the soccer ball appear to be substantially low.

“Trump would have to ignore multiple security warnings and intentionally install a malware on his device,” Linus Neumann, a spokesman for the Hamburg-based Chaos Computer Club, told Bloomberg. He said he couldn't see the president "falling for a silly attack like this.”