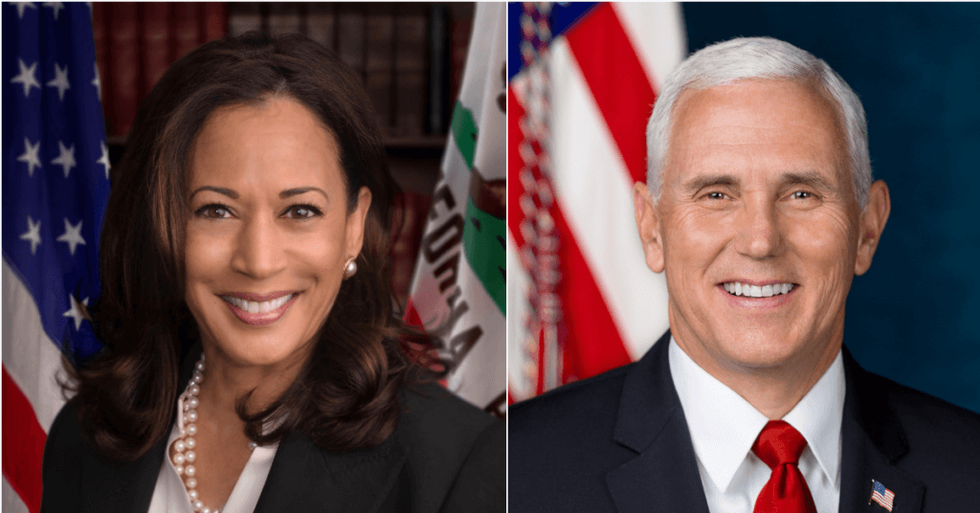 In 2016, one of the revelations that came out on the campaign trail about then-Vice Presidential nominee Mike Pence was his unwillingness to meet one-on-one with women because of his Evangelical Christian faith.

According to The Washington Post, Pence first revealed that he “never eats alone with a woman other than his wife” back in 2002 but it came out again during the campaign and has now been brought up once again by Kamala Harris in a new MSNBC interview.

On where she disagrees with Pence, Harris began:

"I disagree with most of what the Vice President stands for, when he makes decisions about our LGBTQ community in a way that doesn’t understand that they should be entitled to full equality and all rights under the law as any other American."

"I disagree with him when he suggests it’s not possible to have meetings with women alone by himself. I think that’s ridiculous — the idea that you would deny a professional woman the opportunity to have a meeting with the Vice President of the United States is outrageous."

Pence's press secretary claimed it was a mischaracterization of the VP.

"He’s elevated women to positions of leadership throughout his career & relies on their advice & counsel. Get your facts straight."

However, their defense failed to state Pence changed his rule of not meeting one-on-one with women, just that he allowed them to have roles in his office.

People drew comparisons between Pence's views and other strict codes regarding women.

People wondered what the reasoning was.

Can evangelical men not control themselves? Or do they consider all women unclean temptresses looking to tear down powerful, righteous men in the same vein as the vilification of Jezebel?

@harmsre @thehill I could blame him, public place, windows, tapes, whatever, he could protect himself, Pence does n… https://t.co/LjFeVrem4E
— Charisse Buchanan (@Charisse Buchanan) 1552614698.0

@thehill Poor guy. Never learned self-control. Lives in fear of being alone with a woman. Wow. He has given women s… https://t.co/PGiiaBXzr0
— Windsoarsays (@Windsoarsays) 1552616185.0

While some asked how Pence could reconcile his strict faith that he claims compels him to such strict guidelines as not meeting with women and denying LGBTQ people equality when serving as Vice President to President Donald Trump.

@thehill Then why does he serve his boss who would do much more with women?
— JisooRoseJenLi (@JisooRoseJenLi) 1552615968.0

However some felt it was a perfect fit.

Harris joins a large field of Democrats seeking the nomination in 2020.