Political Analyst Asked Whether Kamala Harris Was 'Being Too Aggressive' During the Debate, and Twitter Made Him Absolutely Regret It

California Senator Kamala Harris dominated on the second night of the first Democratic debate of 2020 presidential candidates according to many people who viewed the event. Harris—born in Oakland, California to a Tamil Indian mother and Jamaican father—is a former district attorney and state Attorney General.

Making her case was a skill Harris excelled at to rise to the level of success she did.

But Harris is still a woman and a person of color. And some people have outdated expectations for how women, especially women of color, are allowed to act and speak.

The tone policing of women of color is so pervasive that numerous sociological and psychological studies and articles have been completed on the subject.

So when political analyst Stuart Rothenberg's reaction to what many hailed as an exemplary performance was to ask...

"Is Harris being too aggressive?"

...people were not surprised.

But they were also not happy. And they let Rothenberg know.

Women definitely could relate to the situation.

Competent women who speak their mind often get labeled "aggressive" when their male counterparts are praised as being "assertive" and "ambitious" or a "go-getter" when displaying identical behavior.

The same reaction came from women over and over.

Women were not appreciative of Rothenberg's impression or characterization of Harris. 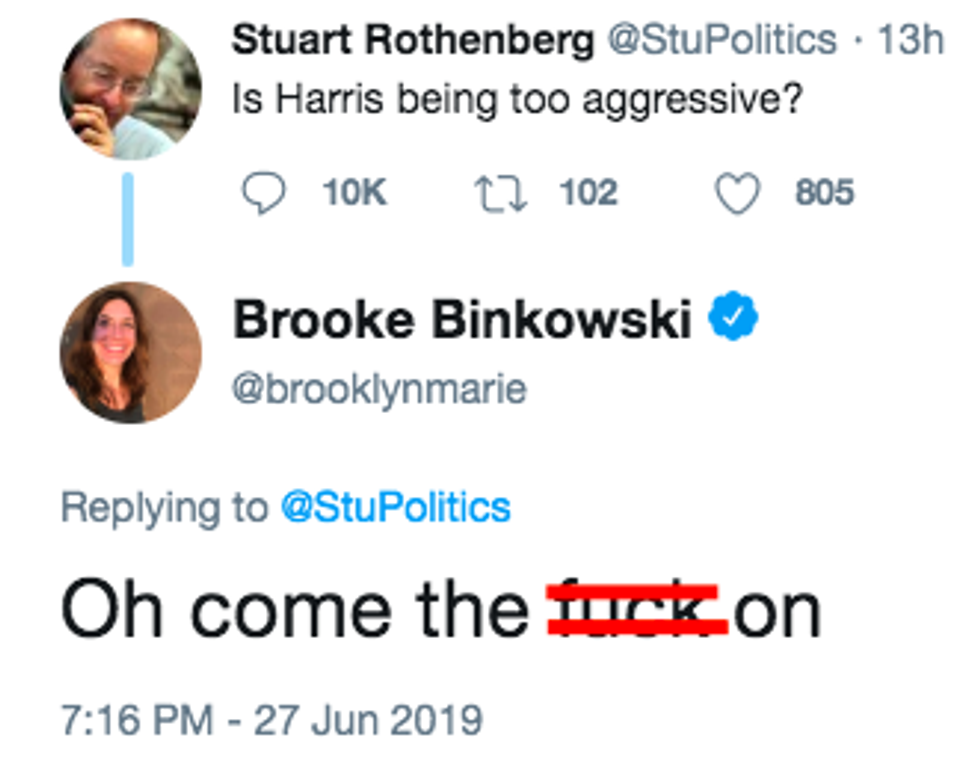 Several women shared the criticisms they often face, regarding whether they smile enough, their perceived tone or their clothing.

However one woman fell into that same trap of judging Harris on her appearance over her words.

But she was quickly checked for it.

And even those who agreed that Harris was aggressive rather than knowledgable or assertive, thought the inclusion of "too" was inappropriate for the job Harris is seeking.

At the end of the night, Rothenberg declared Harris and South Bend, Indiana mayor Pete Buttigieg the big winners.

The political analyst has yet to respond to the backlash over his characterization of Harris as aggressive.

To learn more about sexism, the project Everyday Sexism was established. After the success of the project, the book Everyday Sexism: The Project that Inspired a Worldwide Movement, available here, was created as a companion to the original project.

"The Everyday Sexism Project was founded by writer and activist Laura Bates in April 2012. It began life as a website where people could share their experiences of daily, normalized sexism, from street harassment to workplace discrimination to sexual assault and rape."

The book Underserved Women of Color, Voice, and Resistance: Claiming a Seat at the Table, available here, can help  allies understand daily life for women of color and advocate for them to be heard without the traditional judgments and obstacles they face.

"Women of color face unique social challenges that exist at the intersections of race, gender, class, and sexual orientation. While some challenges are common to women of color, others reflect the distinct journey each woman makes as she negotiates her identity within her family, professional circle, social and romantic relationships, and community. The editors have constructed a rich collection of voices in this work exploring the politics of women of color across various social contexts."

Republican Florida Governor Ron DeSantis has been roundly criticized for his handling of the pandemic that's caused a public health crisis in the United States.

DeSantis waited until Wednesday to announce a stay-at-home order for his state of Florida, where the virus is nearing 7,000 cases.

Senator Kelly Loeffler (R-GA) came under fire last month after news broke that she sold millions of dollars of stocks after a senators-only briefing on the virus that's caused a global pandemic. This was just before the stock market plummeted by thousands of points in the face of uncertainty in the national health crisis.

But she wasn't done yet.

During the global pandemic, unemployment has ballooned in the United States.

Not only do those people need unemployment benefits, which Congress addressed in the relief package created in the Democratically controlled House of Representatives, but many also lost their health insurance with their jobs.

The pandemic that thrust the United States into a national health crisis was repeatedly dismissed by President Donald Trump during its early stages, when prevention was most feasible.

Trump ignored simulations and intelligence briefings that warned the United States was not prepared for a pandemic. Then, the first US cases began getting diagnosed.

The pastor had told congregants that the church had installed vents which kill all diseases. He also encouraged them to shake hands.

After years of boasting about his economy, President Donald Trump now claims that increased market instability and skyrocketing unemployment due to the global pandemic couldn't have been predicted or prevented.

This is constantly proving to be untrue.